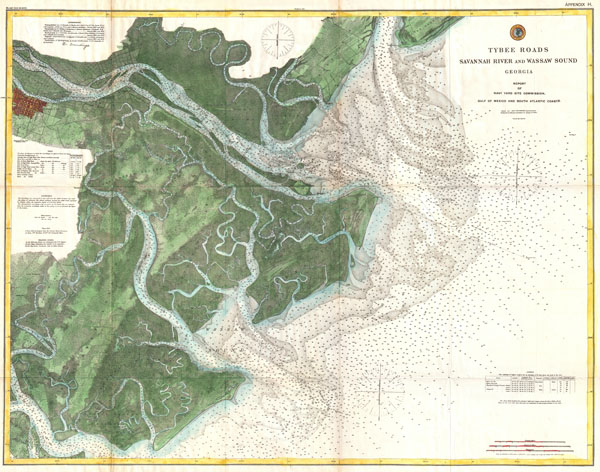 This is a rarely seen nautical chart of Savanna Georgia, the Savanna River, and environs. Depicts from Savannah eastward to Hilton Head Island and southward as far as the entrance to the Vernon River. Shows Wassaw Sound, Skiddaway Island, Wassaw Island, Wilmington Island, Tybee Island, Turtle Island and Jones Islands. Offers superb detail both inland and offshore. Has a detailed city plan of the city of Savannah showing the grid structure, outlying buildings, and surrounding farmlands. Offshore, this chart offers countless depth soundings throughout as well as showing shoals and depth zones through shading. Notes on Tides, Soundings, and weather in the upper left quadrant. Notes on lighthouses in the lower right quadrant. Title area in the upper right quadrant. Based upon a similar though less detailed chart of this region first issued by the Coast Survey in 1867. Prepared under the supervision of F. M. Thorn, Superintendent of the U.S. Coast Survey in 1886.

Very good condition. Minor verso reinforcement and toning on some of the original fold lines.
Looking for a high-resolution scan of this?