1884 Colton Map of Northeast Africa During the Mahdist War 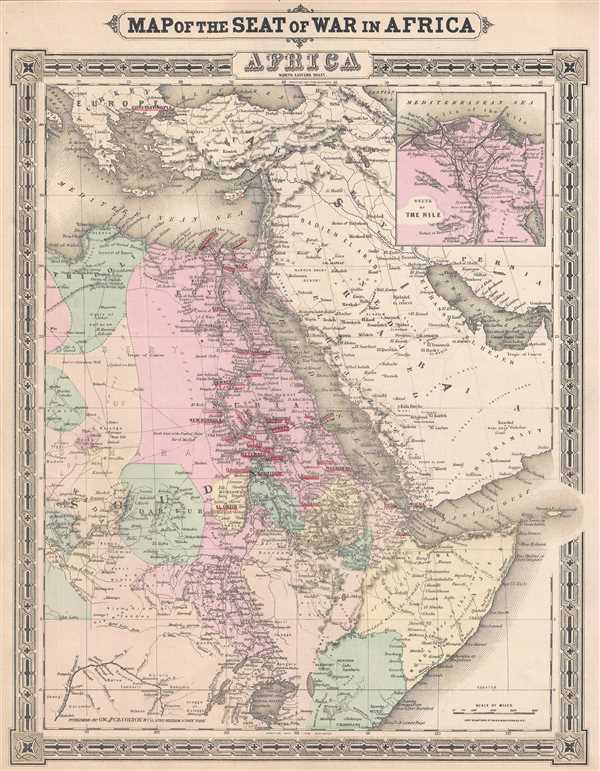 1884 Colton Map of Northeast Africa During the Mahdist War

Dates from the Anglo-Egyptian War and the American Egyptian Expedition.
$500.00

This is an extremely rare 1884 George Woolworth and Charles B. Colton broadsheet map of Northwest Africa during the Mahdist War, which lasted from 1881 until 1899. The map depicts the region from Italy and Libya to Iran, the Strait of Hormuz, and the Arabian Peninsula and from Greece, the Black Sea, and the Caspian Sea to Lake Victoria. Entitled Map of the Seat of War in Africa, several concurrent conflicts are being illustrated here. Overall, the entire conflict is known as the Mahdist War, which lasted from 1881 – 1899. Campaigns within the Mahdist War that had occurred by 1884 include the Anglo-Egyptian War (1882) and the Egyptian Expedition (1882) was the United States' response to the Anglo-Egyptian War.

The Anglo-Egyptian War, instigated by a coup attempt against Twefik Pasha, the Khedive of Egypt and Sudan, in 1878. A few years later, in January 1882, the British and French sent a 'Joint Note' to the Egyptian government which declared their recognition of the Khedive's government. By May, a joint British and French fleet had arrived at Alexandria, but they did not open fire on the city. It was not until July 11, 1882, after a British ultimatum had been rejected, that British warships (the French navy had been recalled to France) opened fire on Alexandria. Land battles between British and Egyptian forces did not occur until August, but, ultimately, the British restored the power of the Khedive.

American Involvement in the Egypt

The United States decided that it needed to be involved in order to protect American citizens and property in Alexandria, before the British bombardment. A squadron of three American ships arrived off Alexandria in late June and early July and operated as observers to the unfolding drama. Forewarned about the impending British bombardment of July 11th, American Rear Admiral James W. Nicholson alerted American citizens and opened the American ships to any and all refugees from the city who needed shelter or medical care. American marines and sailors were also the first foreign troops to land at Alexandria on July 14th, with orders to protect the American consulate, aid American citizens, and help put out the many fires ravaging the city.

A highly detailed depiction of the region, myriad cities and towns are labeled from Greece to Lake Victoria, especially along the Nile River. Several of the larger cities are labeled in bold and highlighted, including Cairo, Alexandria, and Khartoum. Regions in Africa are shaded different colors, creating the impression of solid territorial boundaries, and some of these are labeled, including Nubia, Egypt, and Darfur. An inset map of the Nile River Delta is situated in the upper right corner and depicts the region from the Mediterranean Sea to Medinet el Fayouin. Several railroad lines are illustrated, one of the important innovations of the Mahdi War. As a large amount of the fighting took place south of Cairo and into Sudan, railroads played a vital role in supplying British forces.

This map was published by George Woolworth and Charles B. Colton in 1884. While cartographically based on Colton's earlier atlas map of the same region, this is in fact a very rare map, with revised borders and updated content. We have only been able to locate one example in institutional collections. We are aware of no other positively identifiable examples.