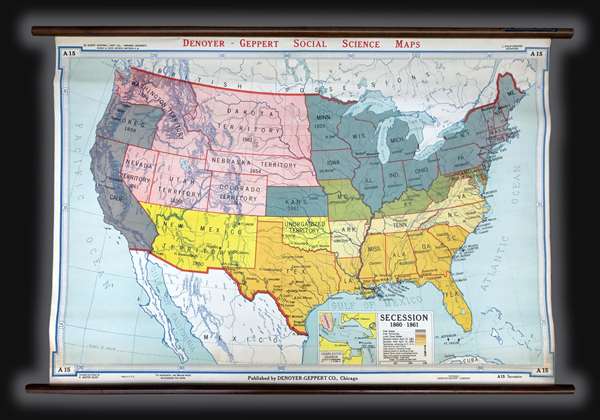 Detailed delineation of how the states and territories were aligned at the beginning of the American Civil War.
$300.00

This is a c. 1940s Albert Bushnell Hart and Denoyer-Geppert Company wall map of the United States. The map depicts the continental United States from the Pacific Ocean to the Atlantic Ocean and from Canada (labeled British Possessions) to Mexico. The states are shaded multiple different colors to differentiate between the states and territories that remained in the Union and those that seceded. The two different colors employed to denote the states that seceded are divided in two: those that seceded before April 14, 1861 and those that seceded after. Fort Sumter, a U.S. Army fort in Charleston Harbor, surrendered April 14, 1861, and President Lincoln issued a proclamation calling up 75,000 troops to put down the rebellion. For four states, Arkansas, Tennessee, North Carolina, and Virginia, this was the act that pushed them into joining the Confederacy. Missouri, Kentucky, Maryland, and Delaware which are shaded green, were slave states that never declared secession. West Virginia, joined the Union in 1863, when it seceded from Virginia.

Several notations on the map refer to the state of war between the Confederate States of America and the United States of America. Forts are depicted and are labeled by which side held which fort. A handful of arsenals and navy yards are also included. An inset map of Charleston Harbor is located along the bottom border next to the key. Regarding the general geography of the map, the state capitals and other major cities are labeled, along with rivers and the Great Lakes.

This map was created by Albert Bushnell Hart with L. Philip Denoyer serving as geographer. The map was compiled and drawn by R. Baxter Blair and published by the Denoyer-Geppert Company of Chicago. It is number A15 in the Denoyer-Geppert Social Science map series. We have dated this map as c. 1940s due to the paper it is printed on. Several different editions of this map were printed, which allows for the possibility that this particular example could date from an earlier or later year.

The Denoyer-Geppert Company (1916 - 1984) was a Chicago-based publishing firm that dealt in maps, atlases, and spherical cartography (globes). For 68 years, the company played a critical role in the education of the world’s students. Founded in 1916 by Otto E. Geppert (the salesman) and L. Philip Denoyer (the cartographer/editor). Denier was born in Milwaukee in 1875 and was a high school principal by the age of 32. He was also completing graduate work at the University of Chicago at the same time. He was appointed the first Professor of Geology and Geography at the State Teacher’s College - La Crosse (University of Wisconsin) in 1909. Legend has it that Denoyer met Geppert while teaching one of his classes, when the latter came up from Chicago to sit in on one. Geppert was working as a salesman for A.J. Nystrom and Company, which today self-identifies as ‘the United States’ older publisher of wall maps and globes for classroom use.’ Geppert was there to sell Denoyer on joining the team at Nostrum, believing that his expertise could benefit the company. Three years later they founded the Denoyer-Geppert Company, and within six years had moved from a 500 square foot space into the 50,000 square foot Swedish-American Telephone Building. By 1922, their catalogue consisted of ‘1,200 maps, charts, globes, and associate aids in teaching geography and history and 800 brilliantly illuminated biological charts and anatomical models.’ In 1967, Denoyer-Geppert was contracted by NASA to build the first official and accurate ‘lunar globe’, based on information gathered by Apollo 10 astronauts. The company made 200 of these globes, the first of which was presented by the astronauts of Apollo 10 to President Nixon. Rand McNally, one of their major competitors, bought out their inventory of maps and globes in 1984. Denoyer-Geppert left the Swedish-American Telephone Building and reinvented the company as the Denoyer-Geppert Science Company, which specializes in anatomical models for classrooms. The Swedish-American Telephone Company has been named a historic landmark and was remodeled into loft apartments.


Albert Bushnell Hart (July 1, 1854 - July 16, 1943), a member of the Harvard University faculty for 43 years, was an American historian, writer, and editor. Hart was one of the first generation of professionally trained historians in the United States and a prolific author. He graduated from Harvard in 1880 and went on to study in Paris, Berlin, and Freiburg. He received his doctorate at Freiburg in 1883. He returned to Harvard that year as the instructor of the American history course offered at the time and retired in 1926.

Very good. Backed on linen. Attached to original rollers. Measurment is for the map itself. Since the map is attached to rods, they add an another 2 inches in height and 3.5 inches in width.