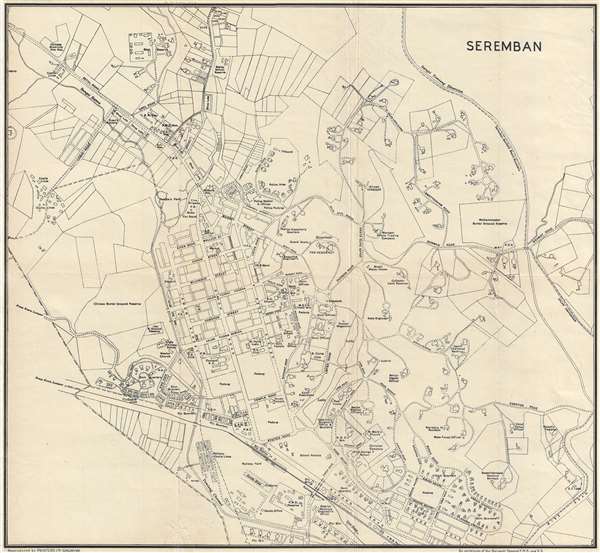 A very uncommon 1933 map of Seremban, Malaysia, issued by Printers Ltd. of Singapore. This map is centered on the government office and Cenotaph at Jabatan Pendidikan Negeri Sembilan and extends from Jalan Lobak to Jalan Ampangan. This map is based upon surveys completed by the Surveyor General of the Federated Malay States and the Straits Settlements.

Seremban is a large town about 60km south of Kuala Lumpur. It rose to prominence in the 1870s with the discovery of tin ore depositions in the region. The town flourished and a regional political and business center with the Linggi River being the sole artery of the ferrying of tin ore out of the region. Today Seremban is the capital of Negeri Sembilan.

This map was issued in Singapore by Printers Limited to accompany the Singapore and Malayan Directory of 1933.

Printers Limited (fl. c. 1879 - 1940) was a Singapore based printing and publishing company active in the late 19th century and first half of the 20th century. Printers Ltd. provided a range of commercial lithography and printing services ranging from business stationary, to custom account books, to lithography. Among other projects, they issued the Singapore and Malayan Directory. Their offices were at 10 Collyer Quay, and their printing works on Trafalgar Street.


Federated Malay States Survey (1922 - 1945), better known as the F.M.S. Survey Department, was established in the early 20th century to produce detailed surveys of British Malaya and the Straits Settlements. The survey department had offices in most major Malayan ports, including Singapore, Kuala Lumpur, Penang (Georgetown), and Malacca. They were the first official survey organization to publish detailed scientifically produced maps of the region.

The Singapore and Malayan Directory of 1933, (Singapore: Printers Limited) 1933.