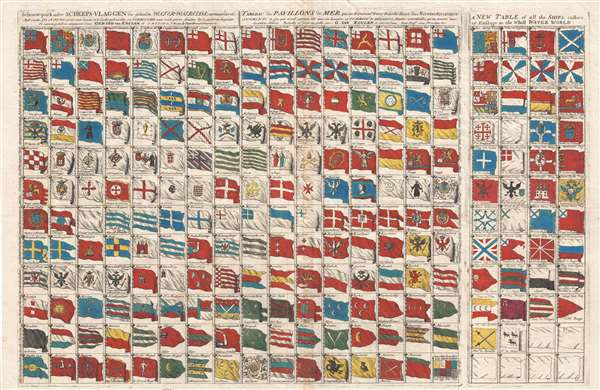 Remarkable flag chart with 2 Pirate Flags and the Globe Flag of New England.

Van Keulen's chart is actually two charts printed on a single sheet from separate plates. The left chart, occupying four-fifths of the sheet, is derived from the Petrus Schenk flag chart of 1811. The right chart, curiously titled in English, and printed from a separate plate, is new and was probably added by Van Keulen to supplement the 1711 plate.

This chart's most historically significant element is its illustration of the ephemeral New England Globe Flag, one of the earliest New England flags and in fact one of the earliest examples of a fully American flag. This flag is located in the upper right corner of the primary plate. This flag and its appearance on this chart is described in the Rhode Island Historical Society Collections (January 1930, Volume XXIII, page 97):

The chart also contains two pirate flags. The most interesting, located in the lower left corner, is the flag of the Christopher Moody (1694–1722). Moody was an early 18th-century pirate active nearly the coast of the Carolinas. He had a bloody reputation and was known for sparing no lives. Moody is often reported as a member of Bartholomew Roberts' crew but this is unverifiable. After he was captured in 1722 he was hung at Cape Coast Castle in Cabo Corso, Ghana. The distinctive pirate flag, here labeled 'Rovers,' features a winged hourglass, an arm and dagger, and a skull and crossbones on a blood red field. While this flag is commonly attributed to Moody, he may have borrowed it from another unknown earlier pirate.

The second pirate flag appears in the English language addendum to the right of the primary chart. This is the legendary Barbary Pirate Berber's Skull Head Ensign. The flag is uncommon, but has been attributed in several 18h century works, including the present chart, attribute to the Barbary Pirates of Beylerbeyi, Algiers. In some references, the flag of Algiers is represented with a Berber's head, while the flag of the pirates is nearly identical save with a skull, as here.

At bottom center the flag of Empire of China (Sina) stands out. It appears as a great whirlpool surrounded by eight decorations. This is most likely based upon an image of the Chinese flag appearing in Carel Allard's, 1705 Dutch flag book, Niewe Hollandse Scheeps Bouw. In fact, it is a misinterpretation of the Qing flag, a dragon on a yellow field with eight banners. However, Schenk and later Van Keulen, likely having never seen a Chinese flag, interpreted the dragon to the best of his ability.

This chart is extremely rare and undated, but most scholarship places it around 1720. We have been able to identify only 2 other examples in institutional collections, at Yale. The chart may have been republished in Amsterdam around 1725 by Jochem Hasebroek.

Gerard van Keulen (1678 - 1726) was a Dutch map publisher and engraver active in Amsterdam during the late 17th and early 17th centuries. Gerard was the son of the more famous Johannes Van Keulen (1654 – 1715) and eventually took over his father's business. He also negotiated to take over the Privilege of Willem Blaeu, thus becoming the official cartographer of the Dutch East India Company (VOC). He was married to Ludowina Konst (16??? - 1740). Gerard is credited with nearly 500 charts and maps published between 1706 and his death in 1726. He also continued to update and republish his family's legendary Zee-Fakkel, often described as the 'Secret Atlas' as it was restricted to VOC pilots. After his death, the firm was passed on to Gerard's son, Johannes II Van Keulen (1704-1755), who significantly updated the atlas. The final true Van Keulen editions of the atlas were published by Gerard Hulst Van Keulen (1733-1801), Johannes II's son. The final edition of the Zee-Fakkel was published posthumously in 1803. Afterwards the firm fell into the hands of the Swart family, who managed to for several generations until it finally closed its doors in 1885. It is noteworthy that though ostensibly controlled by the Van Keulen men, it was their widows who maintained and managed the firm in the periods following their husbands' deaths. Learn More...