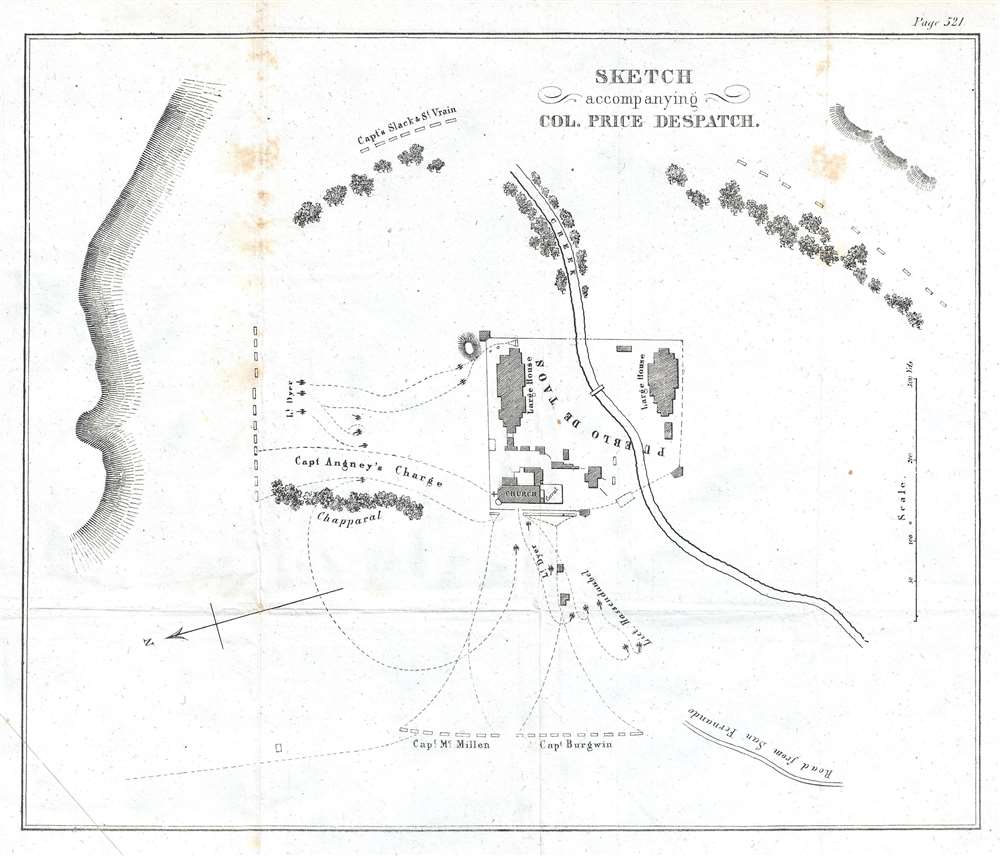 The final battle between Colonel Sterling Price's force and the insurgents leadint the Taos Revolt.

This is an 1847 William Hemsley Emory map of the Siege of the Pueblo de Taos, a modern-day National Historic Landmark and UNESCO World Heritage site located one mile north of the modern city of Taos, New Mexico. Centered on the pueblo with the Red Willow Creek running through it, the map illustrates the deployment of Colonel Sterling Price's men as he laid siege to the Pueblo de Taos, the final stronghold of the insurrectionists that started the Taos Revolt only a few weeks prior to the siege with the murder of Territorial Governor Charles Bent.

The Siege of the Pueblo de Taos

Begun on the afternoon of February 2, 1847, Colonel Price first ordered Lt. Dyer and his artillery battery to barrage the pueblo from 2500 yards to its west. The firing lasted for two and one-half hours before Price and his men retired to Don Fernando de Taos (modern-day Taos) for the night. Early the following morning, Colonel Price organized his force in the manner in which they are deployed here, with Captains McMillan and Burgwin to the west of the pueblo, Captains Slack and St. Vrain to the east, in order to deter a retreat into the mountains, and the remainder of his force and Lt. Dyer's artillery battery 300 yards to the pueblo's north. At this point, all the insurrectionists were firmly barricaded in the pueblo's church, which had thick stone walls. The artillery batteries opened up at 9 a.m. but were unable to breach the church's walls. It would take some ingenuity on the part of Price and his officers to finally gain entry into the church that afternoon around 3 p.m. and quash the revolt for good.

Colonel Price and the U.S. forces moved quickly to crush the revolt. He led a force of 300 U.S. troops, which was accompanied by sixty-five volunteers, some of which were New Mexican. Along the way to Taos, Price and his forces hammered a force of 1,500 Hispanos and Puebloans, before successfully recapturing Taos and the Taos Pueblo. A 'drumhead court-martial' was convened by Price once he had secured Taos, and, ultimately, fifteen men were found guilty of murder and treason and sentenced to death. By the end of the process, the U.S. hanged twenty-eight men in Taos in response to the revolt. A year later, the United States Secretary of War reviewed the process and stated that the man convicted of treason may have been wrongly convicted, an opinion upheld by the U.S. Supreme Court. All the other convictions, however, were affirmed.

William Hemsley Emory (September 7, 1811 - December 1, 1887) was an American surveyor, civil engineer, and Army officer. Born in Queen Anne's County, Maryland, Emory graduated from the United States Military Academy at West Point in 1831, was assigned to the Fourth Artillery, and resigned from service in 1836 to pursue civil engineering. He returned to the army in 1838 to serve in the newly-formed Army Corps of Topographical Engineers. During the Mexican-American War, Emory served in the Army of the West under the command command of Stephen Watts Kearny. While serving with Kearny, he kept a detailed journal that was then published as Notes of a Military Reconnaissance from Fort Leavenworth to San Diego and soon became an important guidebook for the route to Southern California. After the war, Emory served as part of the team that surveyed the United States-Mexican border. When the American Civil War started, Emory was stationed in Indian Territory and immediately realized the likelihood that Confederates would capture him and his men. To avoid this, Emory quickly secured the services of Black Beaver, the famous Lenape warrior, to guide them out of the territory. Emory and his troops, on their way from Fort Washita to Fort Leavenworth, captured a number of their Confederate pursuers, which were the first prisoners taken during the war. Emory then served in the Army of the Potomac, in the Western Theater, and in the Shenandoah Valley Campaign of 1854. After the war, Emory held the post of commander of the Department of the Gulf during Reconstruction and, in September 1874, President Ulysses S. Grant ordered Emory to New Orleans, where he successfully negotiated a peace with the white supremacist paramilitary organization the White League, which led to the White League being disbanded. Emory married Matilda Wilkins Bache on May 29, 1838 in Philadelphia, with whom he had two sons, both of which served in the United States armed forces.