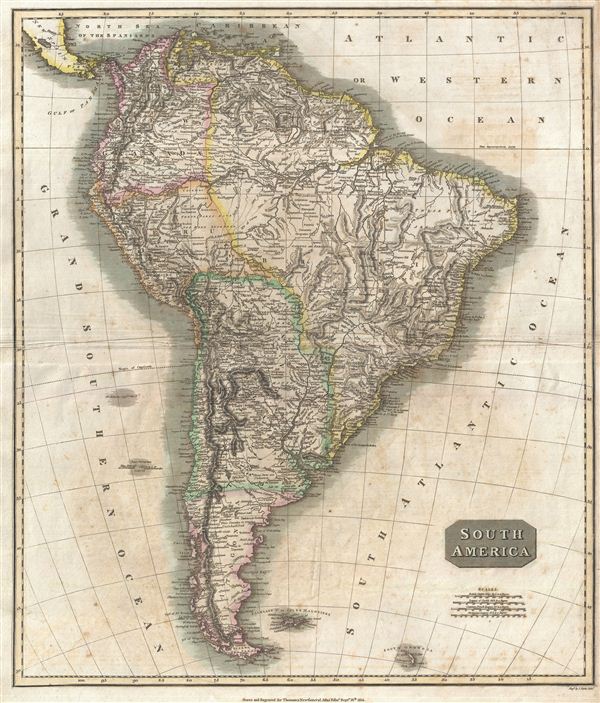 Reveals the continent on the cusp of its 50 year struggle for independence.

This is John Thomson's fascinating 1814 map of South America in its first edition. Covering the entire continent from the Caribbean Sea to Tierra del Fuego and the South Georgia Islands, this map reveals the continent on the cusp of its half-century struggle for independence. This map is full of often misleading detail, especially in the Orinoco, Paraguay, and Amazon River basins where many the missions, geographical formation, and indigenous tribes, suggest greater levels of exploration than hand in fact occurred. Though the persistent Laguna de Xarayes has finally been abandoned as a speculative source for the Paraguay River, Lake Parima, supposed site of Eldorado and apocryphal city of Manoa, figures prominently in Guiana. A dotted boundary line between Lake Parima and the coast identifies the limited of French Guiana by the Treaty of 1801. Lost in the dense mapping of rivers and mountain rangers are various annotations such as 'these lands are unknown,' 'these parts have never been explored,' and 'this country is uninhabited.' In general Thomson maps are known for their stunning color, awe inspiring size, and magnificent detail. Thomson's work, including this map, represents some of the finest cartographic art of the 19th century. Relief is shown by hachure with towns, cities, and major topographical features identified. Engraved in 1814 by J. Moffat of Edinburgh for issue as plate no. 54 in the 1817 edition of Thomson's New General Atlas.