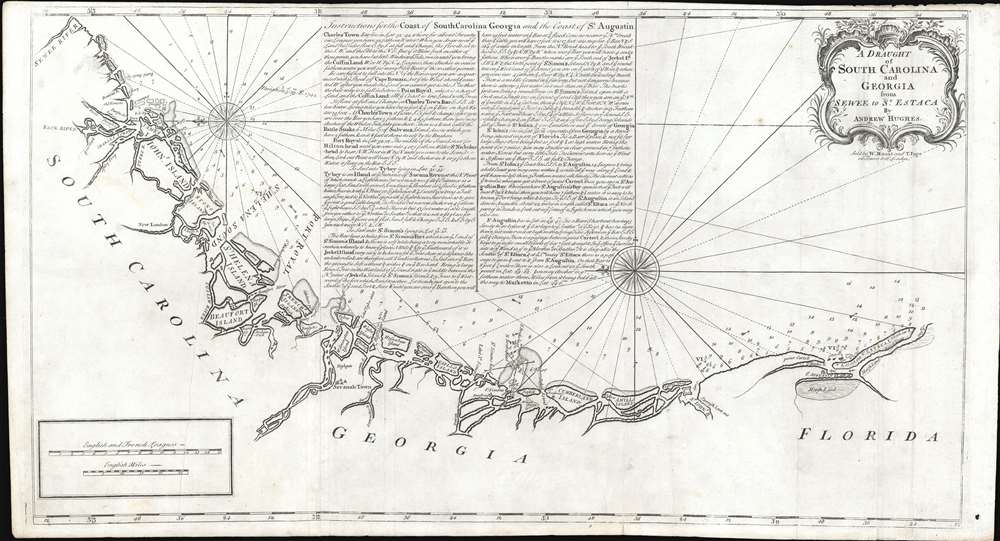 A rare and important 1778 American Revolutionary War era Andrew Hughes nautical chart or maritime map of the coasts of South Carolina, Georgia, and northern Florida. During the early part of the Revolutionary War, this was the best obtainable nautical chart of the Sea Islands. Oriented to the east, this stunning map covers the Atlantic coast from the Santee River (Sewee River), South Carolina, past Charleston, Beaufort, and Savannah, to Saint Augustine, Florida. In addition, the map offers extensive and valuable piloting instructions addressing the entire coastline as well as most individual islands, including Tybee Island, Amelia Island, and Sapelo Island. It also includes excellent coverage of the region's shoals, anchorages, currents, marsh lands, river estuaries, and tides marks.

The chart is credited to Andrew Hughes, of whom we have been able to learn little. There was an man of this name active in South Carolina during the American Revolutionary War, but no evidence that he had any nautical surveying experience. It first appeared in the 1778 edition of Mount and Page's English Pilot, the Fourth Book, replacing A Large Draught of South Carolina. It represents a significant step forward in the cartography of this coastal region both in terms of greater accuracy and expanded coverage. Despite this, the map appeared in only a few Revolutionary War Era editions of the English Pilot and is consequently extremely scarce.