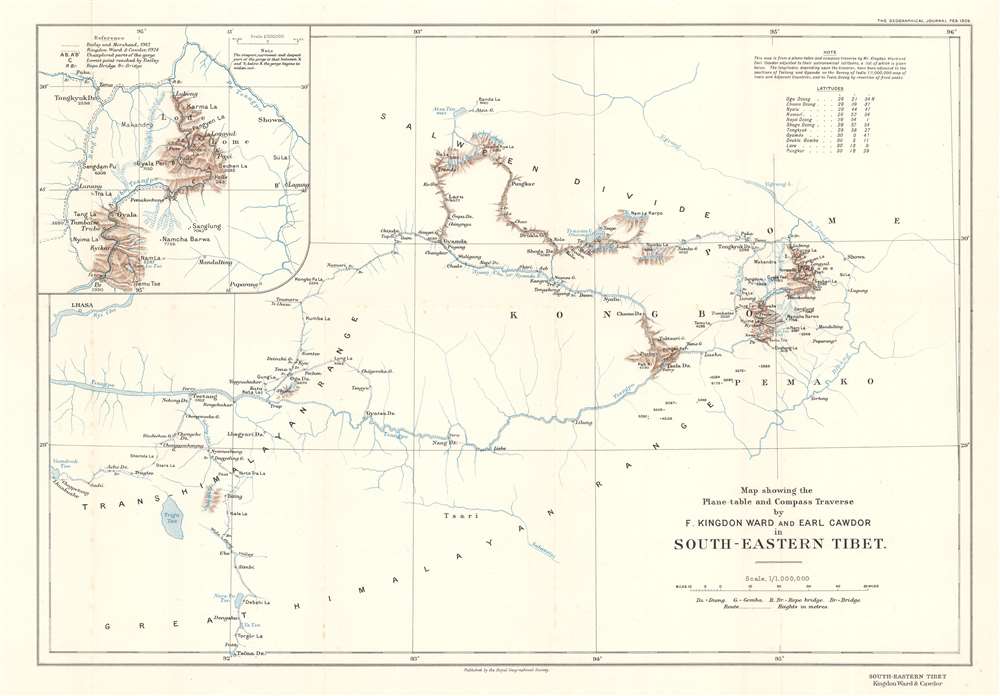 Chronicles a botany expedition through the Tsangpo Gorge and southern Tibet.

This is a 1926 Frank Kingdon-Ward and John Duncan Vaughan Campbell, Earl Cawdor, map of southeastern Tibet tracing their botany expedition of 1924 - 1925. Published in the Geographical Journal, the map depicts the region from Lhasa to Showa, and from Atsa Tso to Tsöna Dzong.

The 1925 Tibet Expedition and the Himalayan blue poppy

This expedition is remembered as one of Kingdon-Ward's most significant accomplishments. On this expedition, he cataloged and collected the acclaimed Himalayan blue poppy for the first time.

He and Earl Cawdor also explored nearly all of the famed Tsangpo Gorge, leaving only three or four miles of its 312.5 miles unknown due to the difficulty of the terrain. The Tsangpo Gorge, also known as the Yarlung Tsangpo Grand Canyon, is the deepest canyon in the world and is slightly longer than the Grand Canyon in Arizona. Western interest in the Tsangpo River began in the 19th century when geographers and explorers theorized that the Tsangpo was part of the Brahmaputra. However, westerners were not allowed in Tibet, and so this theory could not be proved. Frederick Marshman Bailey and Henry Morshead launched an expedition into the gorge in 1913 and proved that the Tsangpo and the Brahmaputra were, in fact, the same river. Kingdon-Ward, in 1924, aside from his botanical goals, wanted to determine what caused the elevation difference between the Tsangpo and the Brahmaputra. He theorized that a massive waterfall caused the difference, but discovered that the gorge contained a series of steep sections, one of which caused him not to be able to explore its whole length.

This map was created from 'plane-table and compass traverse by Mr. Kingdon War and Earl Cawdor' and was published in February 1926 edition of The Geographical Journal. Three examples are cataloged in OCLC and are part of the institutional collections at Harvard College, the Library of Congress, and the University of Minnesota Minneapolis.

Frank Kingdon-Ward (November 6, 1885 - April 8, 1958), also known as Frank Kingdon Ward, was an English botanist, plant collector, author, and explorer. Born in Manchester, went on about twenty-five expeditions over the course of a fifty year career, exploring parts of North Western China, Tibet, Assam, and Myanmar. He discovered numerous plant species, two of which are named for his two wives, and survived several accidents during his explorations, including being impaled by a bamboo spike, falling off a cliff, and being close to the epicenter of a 9.6 magnitude earthquake while in Assam. During the 1930s, Kingdom-Ward served as a spy for the British India Office. He even caused an international scandal in 1935. Tibetan authorities arrested after he crossed the Sela Pass into Tibet after being refused permission to do so. This incident caused the British to investigate the border situation and it was discovered that the region in question had been ceded by the Tibetans to British India in 1914. Kingdon-Ward was active until only years before his death, when, at the age of sixty-eight, he trekked through the Ukhrul district of Manipur, India. Kingdon-Ward was married twice. He first married Florinda Norman-thompson on April 11, 1923 and later married Jeawn Macklin on November 12, 1947. He died after suffering a stroke and falling into a coma, from which he never recovered. Learn More...