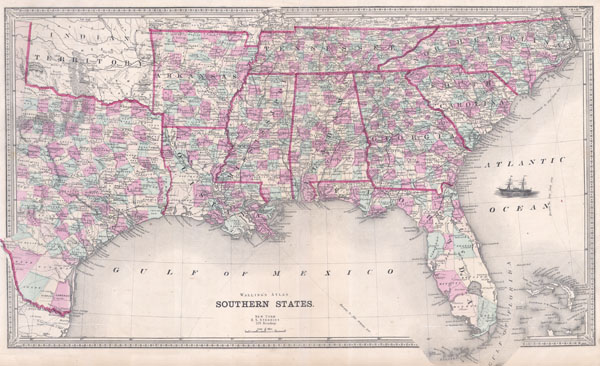 This is an attractive map of the southeastern United States by Henry Walling. Dates to 1868, shortly after the conclusion of the Civil War. When this map was made the southern states were in the midst of economic depression and the reconstruction era. Extends from Tennessee and North Carolina south. Includes Florida and most of Texas. A ship decorates the Atlantic where nautical routes are shown from Savannah to New York and from Havana to New York. Issued by Henry Walling for his Atlas of the Southern States. Prepared by H. S. Stebbins of 229 Broadway, New York.

Very good condition. Minor centerfold discoloration. Blank on verso.
Looking for a high-resolution scan of this?