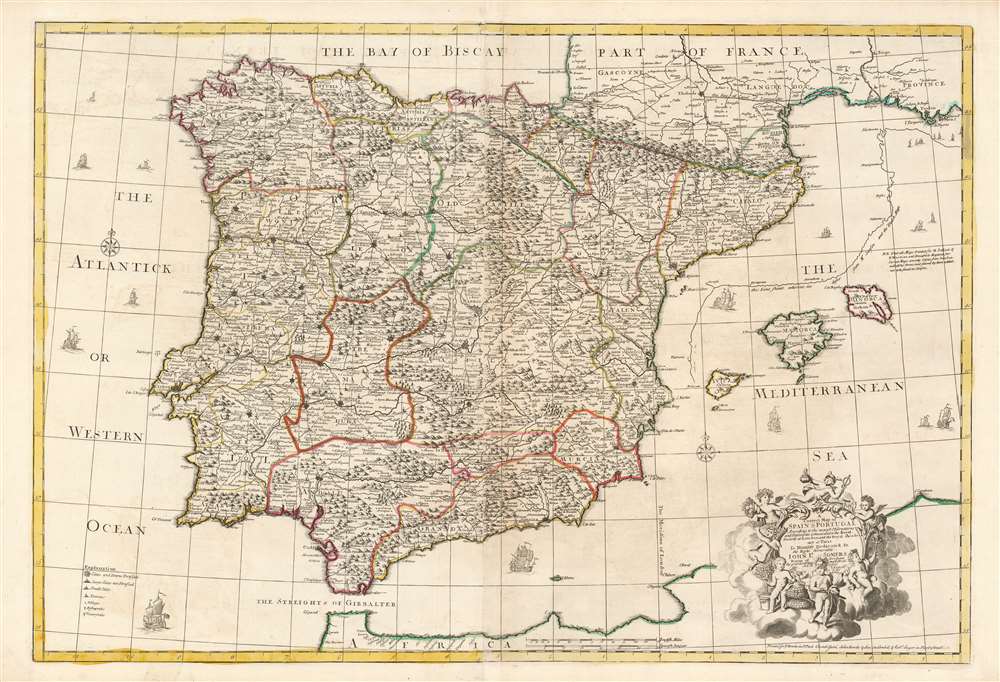 This beautiful, large engraving is John Senex’s 1708 map of Spain and Portugal, covering the entire Iberian Peninsula, including the south of France, part of the north coast of Africa, the Strait of Gibraltar and the Balearic Islands of Ibiza, Majorca, and Minorca. It is attractively engraved, with decorative sailing ships and a baroque-inspired cartouche featuring a half-dozen putti wearing the classical iconography of the Greco-Roman gods (with a martial Mars front-and-center, and a commercial Mercury at top.)

This map - as well as Senex's companion map of France - was intended to correct deficiencies in the maps, specifically, of Nicolas Sanson, which were of such authority that English atlas makers had been content to copy them outright throughout the latter part of the 17th century (and those of the Dutch, generally, which English mapmakers copied faithfully prior to that). In the case of this map, Senex's placement of the Mediterranean coast falls significantly to the west of that proposed by Sanson, whose error Senex emphasizes by illustrating the French geographer's coastline in comparison with his own.

'According to the newest observations'

Senex's map is one of the last to show Gibraltar as a Spanish possession, in spite of its having been captured by the British in 1704 during the wars of succession. Gibraltar was made a British colony under the treaty of Utrecht in 1713.

This map was drawn and engraved by John Senex in 1708. It was initially a separate issue map, but was afterwards included in editions of his English Atlas and later in his New General Atlas. This state, dated 1763, bears the imprint of 'Thomas and John Bowles' who acquired the plate and added it to Robert Sayers' Universal Geographer, which was essentially a repackaging of Senex's plates. The separate map is cataloged only seven times in OCLC, with this 1763 imprint only listed at the National Library of Wales.


Robert Sayer (1725 - January 29, 1794) was an important English map publisher and engraver active from the mid to late 18th century. Sayer was born in Sunderland, England, in 1725. He may have clerked as a young man with the Bank of England, but this is unclear. His brother, James Sayer, married Mary Overton, daughter-in-law of John Overton and widow of Philip Overton. Sayer initially worked under Mary Overton, but by December of 1748 was managing the Overton enterprise and gradually took it over, transitioning the plates to his own name. When Thomas Jefferys went bankrupt in 1766, Sayer offered financial assistance to help him stay in business and, in this way, acquired rights to many of the important Jefferys map plates as well as his unpublished research. From about 1774, he began publishing with his apprentice, John Bennett (fl. 1770 - 1784), as Sayer and Bennett, but the partnership was not formalized until 1777. Bennett retired in 1784 following a mental collapse and the imprint reverted to Robert Sayer. From 1790, Sayer added Robert Laurie and James Whittle to his enterprise, renaming the firm Robert Sayer and Company. Ultimately, Laurie and Whittle partnered to take over his firm. Sayer retired to Bath, where, after a long illness, he died. During most of his career, Sayer was based at 53 Fleet Street, London. His work is particularly significant for its publication of many British maps relating to the American Revolutionary War. Unlike many map makers of his generation, Sayer was a good businessman and left a personal fortune and great estate to his son, James Sayer, who never worked in the publishing business. Learn More...