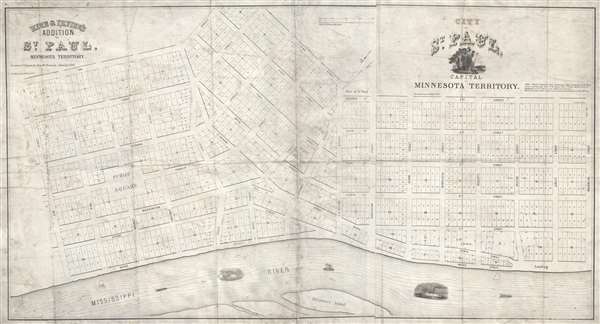 A rarity of extreme historical importance, this 1849 map by Benjamin Brunson is the earliest printed map of Saint Paul, Minnesota, and the original plat of the city. Centered on Seven Corners and Rice Park, this map covers the original 280 acres of Saint Paul, from Elm Street east to Wacouta Street, and from Smith Avenue and East Seventh's Street, south to the Mississippi River.

It consists of two parts, which have been joined to create a single map. The right-hand map, entitled the 'City of Saint Paul' follows the 1847 survey completed by brothers Benjamin W. Brunson and Ira B. Brunson. Although the Brunsons completed this survey in 1847, it was not filed until redrawn by Benjamin in February of 1849. This reasons for this delay in filing is unclear, but may have something to do with the political maneuverings on the part of American Fur agent, land speculator, and politician Henry Mower Rice (November 29, 1816 – January 15, 1894).

The second part of the map, comprising the left hand two-thirds of the map is entitled 'Rice and Irvine's Addition to Saint Paul.' Rice and Irvine's Addition to Saint Paul was the joint project of the wealthy American Fur agent Henry Mower Rice (November 29, 1816 – January 15, 1894) and grocer John R. Irvine (1812 – 1878). In 1848, Rice purchased eighty acres of land between modern day Seven Corners and St. Peter's Street from Irving. Irving himself retained ownership of additional adjacent lands. Rice leveraged his considerable influence to expand the borders of Saint Paul to include these lands, which the two land speculators proceeded to develop. Their efforts not only earned both individuals a fortune, but also influenced the growth of Saint Paul from a fur outpost into a major commercial and transport hub – the center for all further expansion into Minnesota Territory.

It is of some note that the street grid in the two parts of Saint Paul do not match and appear run afoul of each other in the vicinity of Rice Park (Public Square), Seven Corners, and Saint Peter's Street. When they hired Brunson to survey their addition to the west of the 1847 plat, they insisted that the streets follow the course of the Mississippi. The result is a sharp, near 45 degree, turn at St. Peter's Street, creating an unusual array of angular blocks and intersections.

The survey was highly criticized in its day. Writing in 1852, the founder of Saint Paul's first newspaper, the Minnesota Pioneer, James. M. Goodhue, said of Brunson's plat,

The projectors of this town, appear to have had but the smallest possible ideas of the growth and importance that awaited St. Paul … The original pat, was laid off, in very good imitation of the old French Part of St. Louis, with crooked lands for streets, irregular blocks, and little skewdangular lots, about as large as a stingy card of gingerbread, broke in two diagonally, without a reservation fit to be called a public square – without a margin between the town and river, without preserve a tree for shade … In fact, it was a survey without measurement, a plan without method … Then came Rice and Irvine's Addition … This is laid out but little if any better. In fact, the two plats appear to have taken a running jump at each other … It would save immense cost and prove an eternal blessing to St. Paul, if the whole site of the town could be now thrown into one common field, and platted as it ought to be, with large reservations of public ground, with strait, wide, regular streets, and blocks and lots of uniform size.

Nonetheless, the Brunson grid was followed and its impression on the city is today indelible.

This map was published in January of 1849 and printed in New York City by John Major Lithographer. This map is exceedingly rare and does not appear on the market. The only other known example is in the Library of the Minnesota Historical Society.

Benjamin W. Brunson (1823 – 1898) was a surveyor, civil engineer, politician, businessman, and merchant active in Minnesota in the second half of the 19th century. Brunson was born in Detroit, Michigan to an itinerant Methodist preacher. In 1847, he traveled to Saint Paul to help his brother, Ira Brunson, complete the first plat of that city. The original plat map of Saint Paul produced under Ira Brunson's leadership was completed in 1847, but was never recorded and is today lost. Benjamin Brunson was contracted to draw a new plat, which is completed and published in 1849. Later Brunson served in the First Minnesota Territorial Legislature and a was justice of the peace. He also worked as a commission merchant at the Old Steamboat Landing. Later became involved with the Lake Superior and Mississippi Railroad. Brunson's Saint Paul home, built in 1855, still stands and is now listed on the National Register of Historic Places. Learn More...


John Major (fl. c. 1835 – 1854) was a New York based engraver and lithographer active in the middle part of the 19th century. Major began his career in New York as an engraver in 1835. In 1839, he adapted to the new innovation of lithography, founding John Major's Lithography with offices at 49 Wall Street. From 1850 his partner in the lithography business was Daniel Major, perhaps his son. They jointly acquired the lithography business of Peter Mesier, also based at 49 wall street, in 1850. Learn More...

Good. Some soiling and wear on original fold lines. Professionally flattened and backed on linen.