1794 Laurie and Whittle Nautical Chart or Map of the Straits of Bali, Indonesia 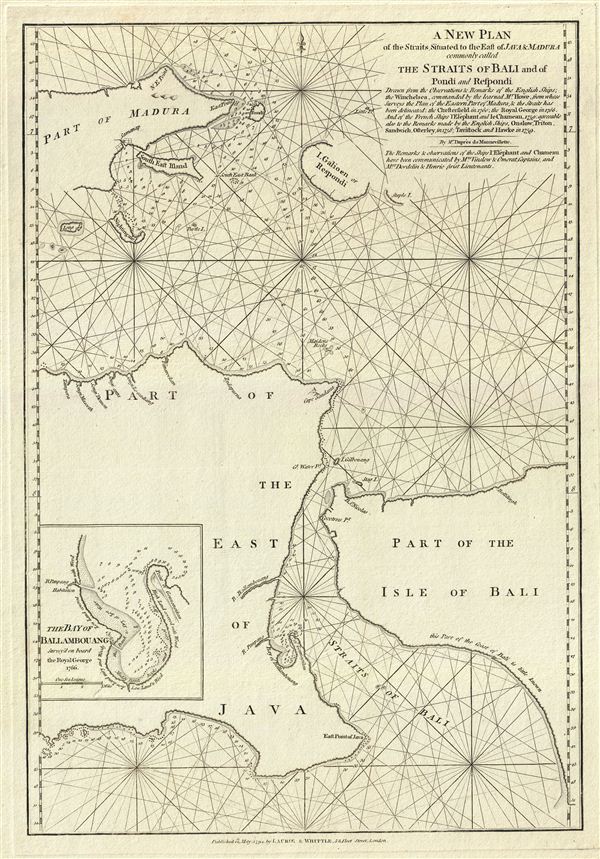 1794 Laurie and Whittle Nautical Chart or Map of the Straits of Bali, Indonesia

A scarce map of Bali, Indonesia, during the Dutch colonial period.

This is a fine example of Laurie and Whittle's 1794 nautical chart or maritime map of the Strait of Bali, Indonesia. It covers from Java's eastern extension to include the western half of Bali and the islands of Madura and Respondi (Sapudi). An inset near the left border details the Bay of Ballambouang, Java. The Bali Strait separated the islands of Java and Bali, which prior to the last Ice Age, were joined by a land bridge. The most populated island in the world, Java was a major producer of rice during the colonial era. Madura and most of Java was under the influence of the Dutch during this period.

The map offers rich detail including countless depth soundings, notes on the sea floor, commentary on reefs, rhumb lines, shoals, coastal features, place names and a wealth of other practical information for the mariner. Cartographically this chart is derived from earlier maps prepared for Jean-Baptiste d'Apres de Mannevillette's 1745 Neptune Oriental. Manevillette based his chart, as noted under the title, on 'observations and remarks of the English Ships; the Winchelsea, commanded by the learned Mr. Howe, from whose surveys the Plan of the Eastern Part of Madura, and the Straits has been delineated; the Chesterfield in 1760; the Royal George in 1766; and of the French Ships, l'Elephant, and le Chameau, 1759: agreeable also with the remarks made by the English Ships, Onslow, Triton, Sandwich, Osterley, in 1758; Tavistock and Hawke in 1759. This map was published by Laurie and Whittle from their offices at 53 Fleet Street, London, on May 12, 1794.

Parry, David E., The Cartography of the East India Islands Insulae Indiae Orientalis, plate 6.18, pages 192-3.
Looking for a high-resolution scan of this?