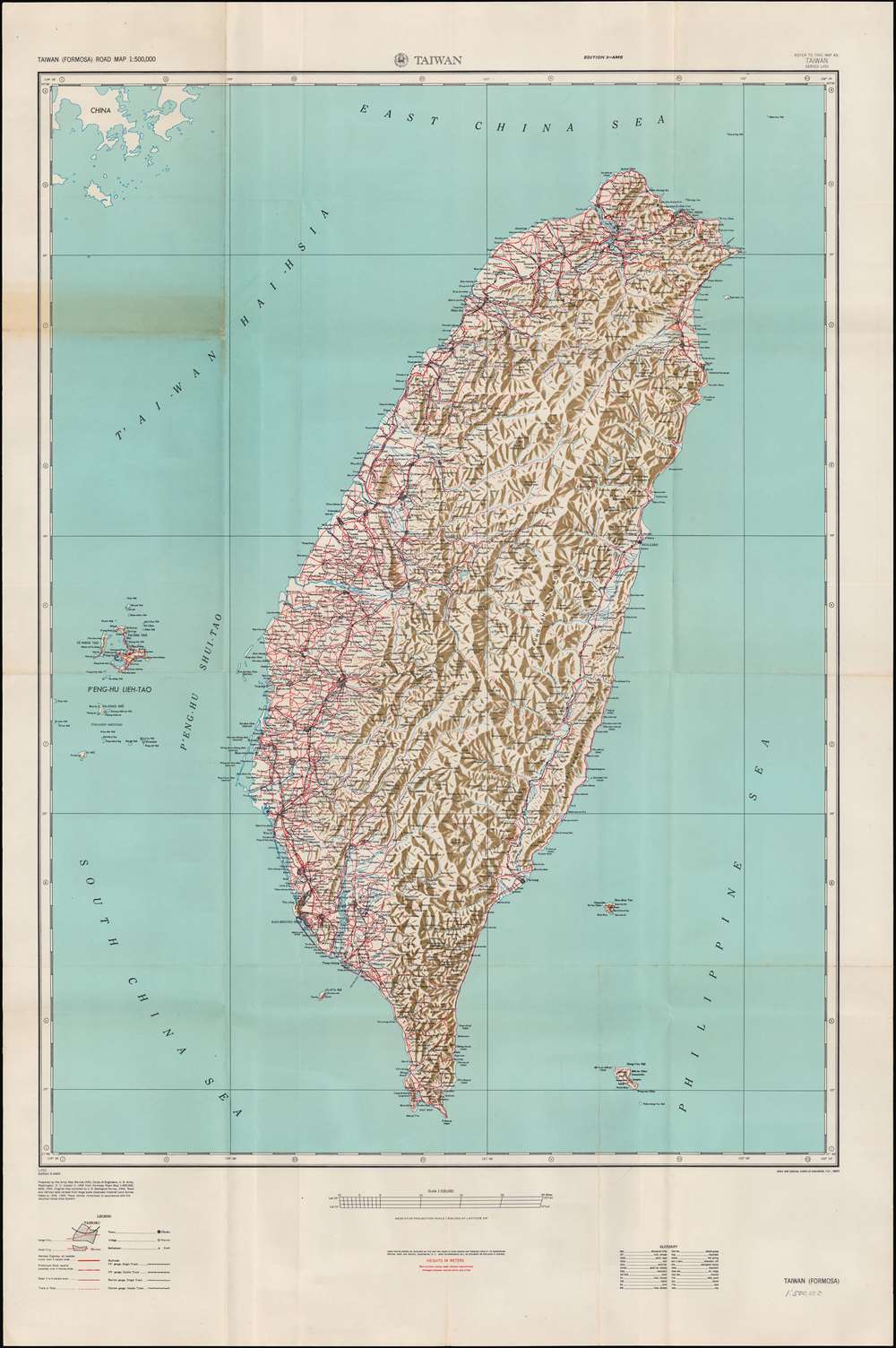 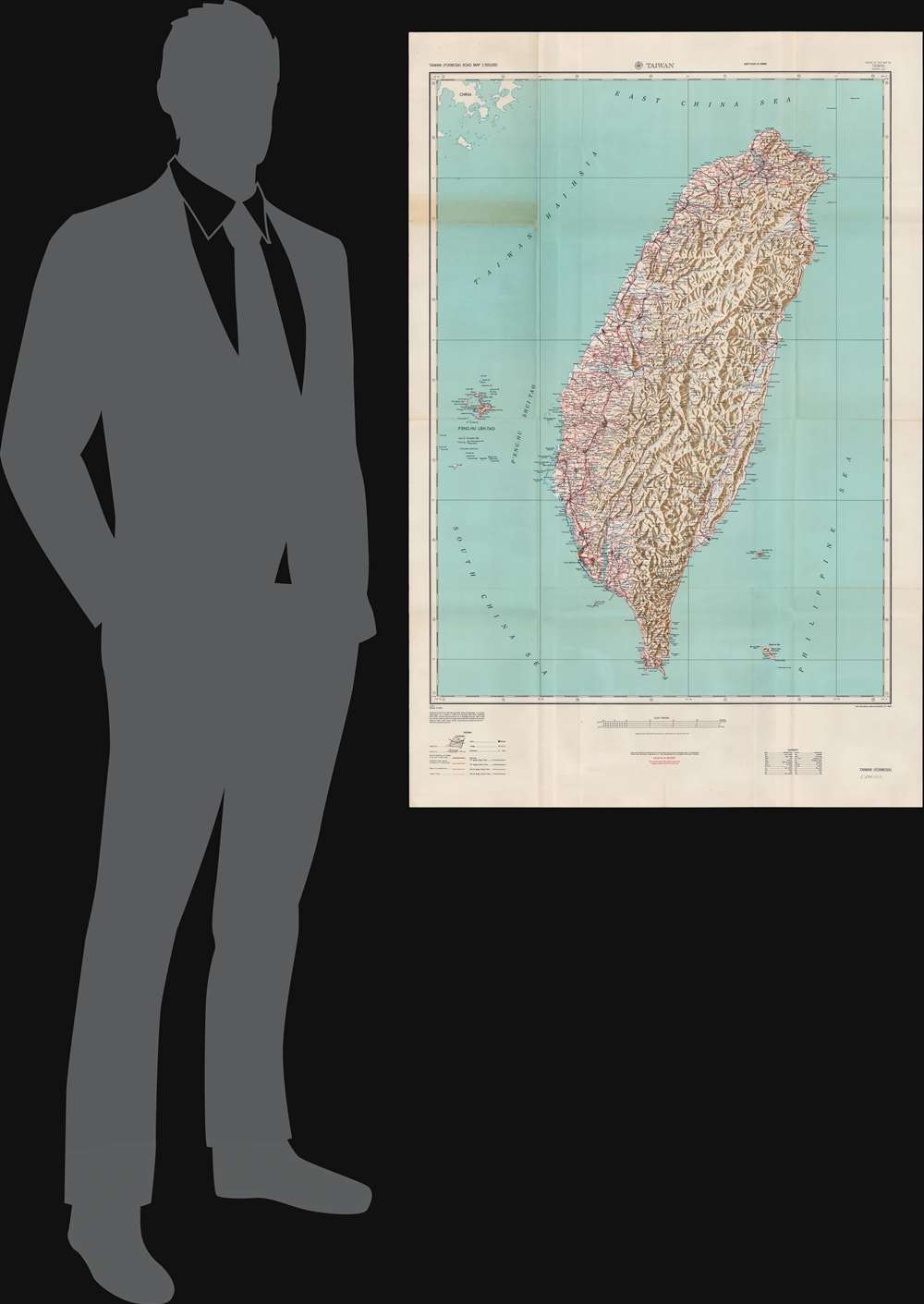 This is an extremely detailed 1950 Army Map Service transportation and topographical map of Taiwan (Formosa). It was produced in the context of the Chinese Civil War (1927 - 1949), when the prospects of a conflict in the Taiwan Straits and on Taiwan itself seemed imminent.

Like other maps produced by Army Map Service, this map attains a level of precision and detail that was very advanced for the time. In this case, the Army Map Service has also benefitted from earlier work done by the Japanese colonial government. This map shows the continued difficulty of building infrastructure on Taiwan, particularly in the mountainous interior, even after fifty years of Japanese colonialism, which prioritized railways and other infrastructure above all else.

The terminology used on the map shows the rapidity of changes of Taiwan's political status between 1945 and 1950. The center of Tai-pei is still referred to as Taihoku, its Japanese-era colonial name. Many smaller towns, the names of rail lines, and several terms in the glossary at bottom are also denoted with their Japanese names. The part of mainland China visible at top-left (now Fuqing, Fujian) is referred to as 'China' instead of 'Red China,' 'Communist China,' 'mainland China,' or 'People's Republic of China' as would be conventional soon afterwards.

The Chinese Civil War had been ongoing in some form since 1927, but the critical and most intense phase was in the late 1940s. During this conflict, the Communist Party's People's Liberation Army (PLA) transformed from a guerilla force to a true battlefield army. At the end of World War II (1939 - 1945), the Chinese Communist Party (CCP) was based in Yan'an, Shaanxi Province, while the Republic of China government, led by Chiang Kai-Shek and his Nationalist Party (Guomindang, GMD), moved from its wartime capital of Chongqing to its pre-war capital of Nanjing. While the U.S. oversaw a series of failed negotiations designed to avoid a full-scale civil war, both the CCP and GMD were eager to go on the offensive. With somewhat tepid support from Washington and a significant advantage in troops and equipment, Chiang Kai-Shek's forces were initially well-positioned and made quick advances in 1946-1947, driving the Communists into Manchuria.

However, with support from the Soviet Union and control of the countryside, the PLA was prepared for a drawn-out guerrilla war, and a series of bitter sieges and battles in Manchuria in 1948 and early 1949 paved the road to CCP victory. At the same time, the GMD regime devolved into corruption, tyranny, and political chaos, beset by an unresolvable monetary crisis, feeling betrayed by the U.S., and outmaneuvered by the CCP in the propaganda war for public opinion.

By late January 1949, the PLA had made advances throughout northern China and captured Beiping (Beijing). Chiang was forced to step down as President of the Republic of China, but maneuvered to prepare for a political revival in Taiwan. On April 20, PLA troops crossed the Yangzi River and raced towards southern China. By the end of 1949, remnant GMD forces had all retreated to Taiwan or held out in small pockets along the frontiers of the new People's Republic (or PRC, proclaimed October 1).

When GMD forces fled to Taiwan in 1949, their future prospects were quite bleak. While the PLA lacked a navy capable of invading Taiwan in the short-term, Chiang and the GMD had alienated much of the population of Taiwan with authoritarian measures and massacres (most notably the February 28 Incident in 1947) as well as their main foreign benefactor, the United States. The U.S. considered recognizing the PRC and turning Taiwan over to the United Nations or leaving it to an eventual PLA invasion, and various designs to topple Chiang were entertained.

But the situation changed dramatically with the start of the Korean War (1950 - 1953). Despite its many flaws and unrealistic irredentism towards the Chinese mainland, Chiang's regime was suddenly a necessary bulwark against Communist expansion throughout Asia. The U.S. signed a mutual defense treaty with the Republic of China in 1955 and was prepared to risk war with the PRC in the First (1954 - 1955) and Second (1958) Taiwan Straits Crises, which were focused on Kinmen, Matsu, and other ROC-held islands just off the Chinese coast (not shown here). The long-term consequence of these events has been the intractable question of Taiwan's status and the continued threat of a major conflict between China and the U.S. over Taiwan.

This map was prepared by the U.S. Army Corps of Engineers Army Map Service in Washington D.C. in 1950, based on an earlier 1944 - 1945 U.S. Geological Survey Formosa Road Map. At top, this is noted as 'Edition 3,' though it is unclear if the earlier two editions were the just-mentioned maps or editions made after 1945. This edition exists in the holdings of several institutions in North America and Europe, including the Library of Congress and the U.S. Geological Survey Library in Menlo Park, CA. It is scarce to the market.

Good. Creases along fold lines and staining in left margin towards top.

OCLC 11303939.Hsiao-ting Lin, Accidental State: Chiang Kai-shek, the United States, and the Making of Taiwan (Harvard University Press, 2016).
Looking for a high-resolution scan of this?