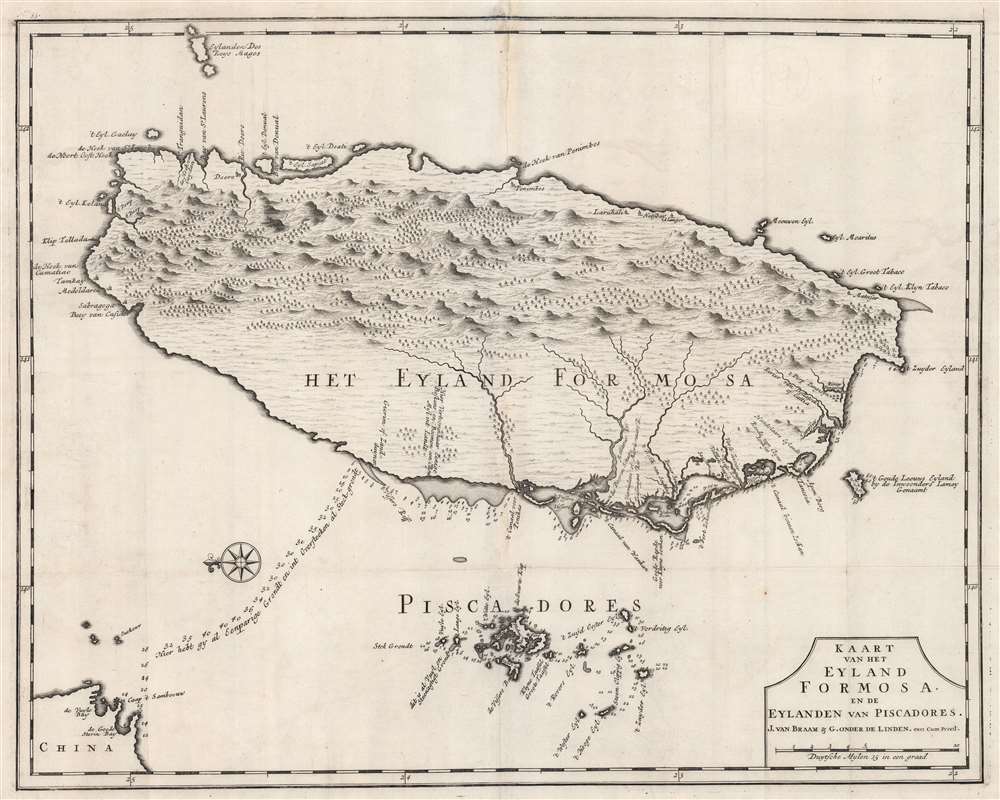 The earliest and most desirable printed map of Taiwan / Formosa.
$9,500.00

Printed in 1726 by Francois Valentijn, this is the earliest and most desirable printed map of Taiwan or Formosa. It is considered the first specific printed map of Formosa. Oriented to the east, with north at the left, Valentijn's map covers the entire island was well as the nearby Pescadores, now known as the Penghu Islands, and the nautical route to Chinese coastal province of Fujian. Soundings appear around the Pescadores, along the west coast of Taiwan, and extend to the Chinese coast.

Cartographically Valentijn based this map on the 1640 manuscript (hand drawn) map of Formosa drawn by Johannes Vingboones. Vingboons based his famous map upon information gleaned during the brief Dutch occupation of Formosa between 1624 and 1662. At the time, and today, Vingboons' manuscript is the best early map of Taiwan or Formosa to survive. No doubt, when Valentijn prepared to publish his Oud en Nieuw Oost-Indien this was also the case. While Valentijn's map closely follows the more decorative work of Vingboons, it is not a slavish copy. Significant new information is has been added to the north and northeastern parts of the island - doubtless extracted from additional information derived from now unknown charts. Moreover, some of the soundings have been revised or updated.

At the time the western part of Taiwan was partially colonized by Chinese immigrants, while the eastern lands were dominated by ferocious headhunting tribes with an history of inhospitality. The Dutch VOC, which established itself in western Formosa in 1624, was as intent on pacifying the aggressive Formosan aborigines and ultimately establishing a trading center capable of rivaling Macao and thus challenging Portuguese dominance of the China trade. The Dutch were repeatedly rebuffed by the Chinese and ultimately driven out of Formosa entirely in 1668 by a Chinese backed aborigine resistance.

The history and hopes of Dutch Formosa can be read into this map. The trade routes to Chines and the inclusion of the Pescadores are indicative of the VOC's intent and long term strategy. As noted by the Taiwan historian Keating, 'Since Taiwan's major ports were dotted along its western coastline; many believed that whoever controlled the Pescadores controlled Taiwan.' The soundings, suggest both a firm occupation of the Pescadores and hint at a well-established trade route with Fujian Province. The VOC, however, was never able to secure a reliable commercial treaty with China and this map remains one of the most significant lasting legacies of the VOC in Formosa.

Francois Valentijn (1666–1727), a missionary, printer, and author was among the first to publish on the history and management of the VOC in the East Indies. Cartographic knowledge of the Dutch East Indies was tightly controlled by the VOC throughout the 17th century. Valuable cartographic data was typically shared among VOC pilots in manuscript form and rarely ever submitted to printing. Valentijn spent 16 years in the East Indies as a VOC minister and, as such, doubtless had access to secret charts, such as the Vingboons Atlas. Despite the strict VOC injunction on publishing its valuable maps, Valentijn successfully published his work in 1726. In the same year Johannes van Keulen II was commissioned as official VOC hydrographer and published his own 'secret atlas' of VOC maps. The fact of both were published in 1726 suggests that the era of VOC dominance in the East Indies had nearly come to an end.

This map was issued in Amsterdam as plate no. 33 in Francois Valentijn's 1726 Oud en nieuw Oost-Indien . It was published by Joannes van Braam and Gerard onder de Linden, whose names appear on the imprint. Today this important map is exceedingly rare.