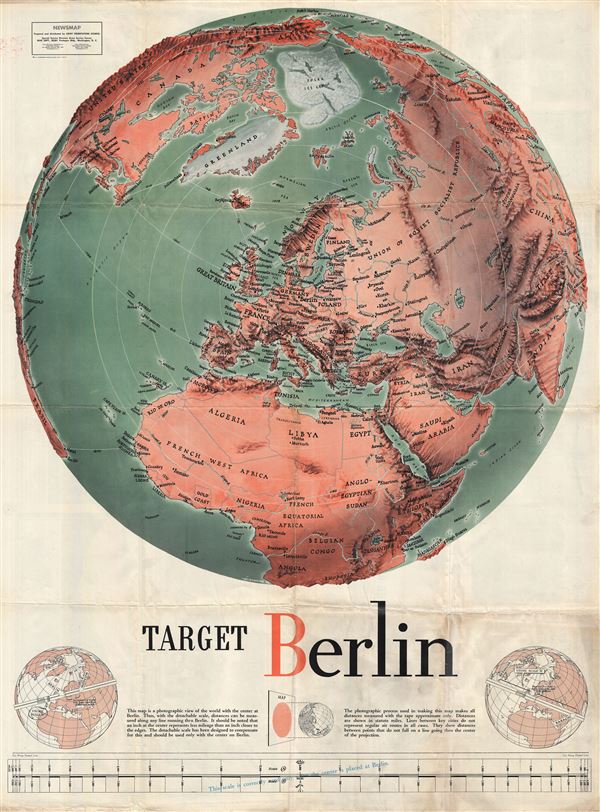 One of the most iconic American World War II propaganda maps, this is F. E Manning's 1943 propaganda broadside map 'Target Berlin.' The focus of the broadside is a dramatic shaded panoptic view centered on Berlin, then the capital of the Third Reich, from which a series of concentric circles radiate creating a distinctive target-like effect. The ever widening circles extend to include all of Europe as well as the global network of Allied power from North America, to Asia, to Africa, to South America.

This broadside, formally entitled Newsmap. Monday, October 25, 1943, Vol. II No. 27, is an aptly timed prelude to the first major allied airstrike on Berlin. Just days after this map was published British Air Marshal Arthur 'Bomber' Harris led a series of air raids on the German capital that did not relent until March of 1944. Although much of the city was destroyed, the Battle of Berlin, as it is now known, is generally thought to have been a failure. The effort accomplished little in the way of crippling or even limiting the German war machine. In fact it led to reprisal attacks, Operation Steinbock, on London.

Below the map there is an ingenious cut away distance scale and the following instructions,

This map is a photographic view of the world with the center at Berlin. Thus with the detachable scale distances can be measured along any line running thru Berlin. It should be noted that an inch at the center represents less mileage than an inch closer to the edges. The detachable scale has been designed to compensate for this and should be used only with the center on Berlin. The photographic process used in making this map makes all distances measured with the tape approximate only. Distances are shown in statute miles. Lines between key cities do not represent regular air routes in all cases. They show distances between points that do not fall on a line going thru the center of the projection.

The verso features a segmented breakdown of the most recent war news on various fronts. Most of it is quite good for the Allies. Following a series of Allied victories in Italy, Russia, at Stalingrad, in East Asia, and Indonesia, the War had, by this date, turned firmly against the Axis powers. As such, there was little need for 'sugar coating' and the general message was, in as much as war can be, truthfully positive.

This is one of many 'Newsmaps' published weekly by the Army Orientation Course of the Special Service Division Army Service Forces, a propaganda arm of the United States War Department. The Newsmaps typically employed bold typesetting and dramatic imagery to relay the most recent war news from a distinctly 'positive' perspective. Few Newsmaps were as dramatic or impactful as Manning's 'Target Berlin,' although one, a very similar map, also by Manning and issued later in the year, 'Target Tokyo' is an exception. Both are in a style similar to that of Richard Edes Harrison, a pioneer in journalistic cartography.