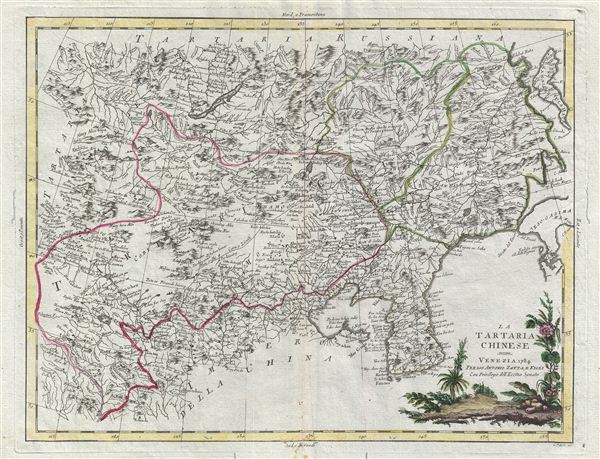 This map is a hand colored 1784 Antonio Zatta map of Chinese Tartary and Korea. Centered on Chinese Tartary, the map details Korea, Manchuria, Chinese Tartary and parts of adjacent Russian Tartary, Independent Tartary, Mongolia, and Japan. The map is engraved in the fine late 18th Italian style and contains a beautiful pictorial cartouche. It details northern China, Korea and the Sakhalin Island and marks many towns and villages including Peking. Of particular interest is in the exceptional detail within Korea and the unusual rendering of Hokkaido, here labeled 'Jeso –Gasima.' It also outlines the portions of the Great Wall of China. During this time in history, this region was dominated by China's last Imperial Dynasty, the Qing. This map was issued as part of A. Zatta's 1784 publication of Atlante Novissimo.

Very good. Blank on verso. Original platelines visible. Original certerfold. Minor wormholing in margins and along centerfold.
Looking for a high-resolution scan of this?