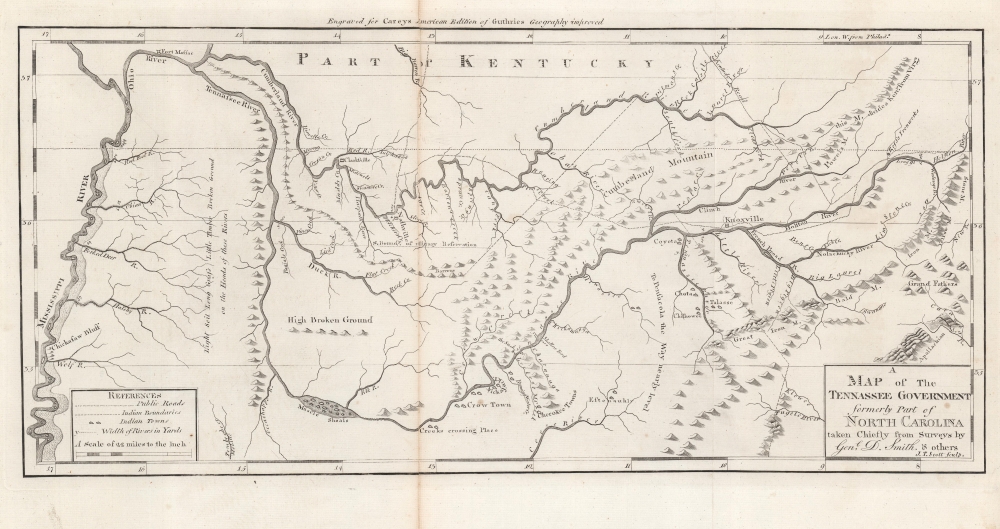 One of the earliest specific maps of Tennessee, this is a c. 1796 Mathew Carey map of Tennessee, or the 'Tennessee Government'. Depicting from the modern-day Kentucky-Illinois border (where the Cumberland River and Tennessee River meet the Ohio River) south to Muscle Shoals in Alabama, the cartography was 'taken chiefly' from the surveys and map by General Daniel Smith. Frontier towns, forts, settlements, and Native American villages are identified, including Knoxville, Nashville, Clarksville, and Fort Massac. The Cumberland and Tennessee rivers are illustrated in detail and numerous tributaries appear as well. The Cumberland Mountains and Appalachian Mountains are labeled, and short comments inform the viewer about this unfamiliar territory's terrain. A key, labeled 'References', appears in the lower left corner and explains notations used to mark boundaries, roads, and Native American towns.

The Evolution of Tennessee

The entirety of Tennessee was originally included in North Carolina's coast to coast charter which, for practical political purposes, was generally assumed to terminate at the Mississippi River. Tennessee's easternmost counties were thus originally the western most counties of North Carolina. In the years following the American Revolutionary War (1775 - 1783) the government of North Carolina was too depleted to defend its westernmost settlements against American Indian attacks or support their right to navigate the Mississippi River. Tennesseans realized they would have to look to themselves for military support. In 1784, Tennessee's eastern counties rallied and attempted to form the new state of 'Franklin' with John Sevier as governor. Meanwhile, in western Tennessee, the Cumberland Settlements ratified the Cumberland Compact and even brokered a treaty with Spain. Despite bold aims, both the Cumberland Compact and attempts to promote the state of Franklin lacked federal support and were suppressed by North Carolina. This changed in 1789 when North Carolina ratified the constitution and joined the Union. In doing so it gave up the rights to its western land paving the way for Tennessee to pursue statehood in 1795-96.

This map was engraved by Joseph T. Scott for publication in Mathew Carey's Carey's General Atlas in 1796. This piece is well represented in institutional collections but is scarce on the private market.