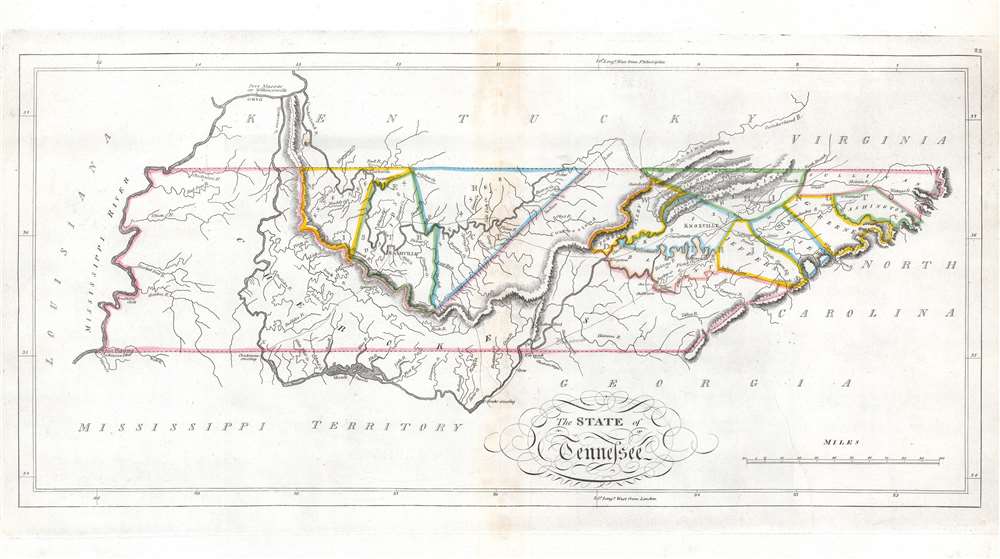 This is an 1814 Mathew Carey map of Tennessee issued at the height of the Creek Wars. This is one of the earliest maps of Tennessee to include an embryonic county structure - fine original outline color defines a handful of emerging counties. Nashville and Knoxville are both labeled. A handful of smaller towns are identified on the skeleton road network. Cherokee territory occupies all of western Tennessee and extends east along the southern border to Tennessee's border with North Carolina.

The Creek War (1813 - 1814) played a critical role in the Tennessee's history and cemented its place in the Union. Long-simmering tensions concerning cultural differences and U.S. attempts to 'civilize' the southeastern tribes boiled over into all-out war in August 1813. A group of Red Stick Creek attacked Fort Mims (near Mobile, Alabama) slaughtered nearly 250 settlers. This atrocity sparked alarm across Tennessee and the legislature called up 3,500 troops in response. Andrew Jackson (1767 - 1845) led the Tennessee volunteers in battles from November 1813 until the war ended on March 27, 1814 at the Battle of Horseshoe Bend. Loyal Cherokees and Creeks fought alongside the Tennessean volunteers and American regulars. The United States victory secured over 20,000,000 acres of former Creek and Cherokee land. The victory spurred considerable enthusiasm, as the states were then smarting from War of 1812 defeats at the hands of the British.

This map was created and published by Mathew Carey for publication in the 1814 edition of Carey's General Atlas. Carey's General Atlas was the first atlas published in the United States to incorporate standardized color. The complete atlas is well represented in institutional collection, but the separate map of Tennessee is scarce on the private market.

Mathew Carey (1760 - 1839) was a Dublin born publisher who established himself in Philadelphia in the late 18th and early 19th century. A young man of socially progressive views, Carey's first known publication, produced when he was but 17 years old, was a pamphlet criticizing dueling. Another pamphlet, issued in the same year, attacked the Irish penal code. Shortly afterwards, in 1779, legal issues, possibly arising from his liberal political activism, forced Carey to flee to Paris. In Paris, Carey had the good fortune to befriend the visiting American diplomat and founding father, Benjamin Franklin. As an Irishman chafing under the rule of England, Carey sympathized with and admired the American revolutionary. The liberally minded pair struck up a lifelong friendship and Carey was hired to work at Franklin's press in Passy, France. A year later, Carey returned to Ireland and resumed his politically provocative publishing career with The Freemans's Journal and The Volunteer's Journal. It didn't take long for political pressure to once again force Carey from Ireland - this time to America (1784). Although largely without funds, Carey convinced the Marquis de Lafayette, who he knew from Franklin's Paris circle, to lend him funds to establish a new publishing concern in Philadelphia. Despite this loan, Carey's firm remained under financed and opened on a shoestring budget. It was most likely his limited budget that led Carey to some of his most important publishing innovations. At the time cartographic publishing was dominated by large printing houses in London and Paris where most, if not all, of the work was completed in house. Without the finances to emulate this large publishing houses, Carey was forced to outsource much of his publishing work. This set the stage for subsequent American publishers who, in order to compete effectively with European firms, relied on an often bewildering network of alliances and collaborations. Carey was a also a master of republishing many of his own maps in multiple different atlases and formats to maximize their profitability. His most important work is without a doubt the 1795 issue of the American Atlas the first atlas to be published in America. Carey died in 1839 but was succeeded by his son Henry Charles Carey who, in partnership with his brother-in-law Isaac Lea, published numerous important maps and atlases under the Carey and Lea, Lea Brothers, and Lea and Blanchard imprints. Learn More...