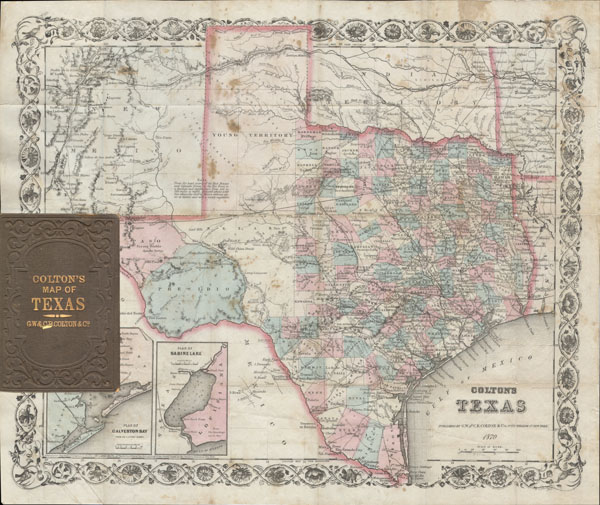 An extremely rare and unusual map pocket map of Texas by G.W. and C.B. Colton. This rare map of Texas was issued in 1870 based upon Jacob de Cordova's important 1849 map of Texas. Cordova sold the publishing rights to his Texas map to J. H. Colton in 1855. Features inset plans of Galveston Bay and Sabine Lake drawn from the 1853 U.S. Coast Survey of this area. Offers detailed notations on Geography, roads, counties, and forts. Specifically indicated the Uited States Mail Route, Smith and Whiting's Route to El Paso, Connelly's Trail, the Commanche Trail, the Route to Fort Smith, the Route to Fort Gibson, and the Emigrants Route. Surrounded by an attractive and unusual decorative border. Folds into brown stamped linen booklet with gilt lettering. Dated and copyrighted: 'Entered according to the Act of Congress in the Year of 1865 by G.W. and C.B. Colton & Co. in the Clerk's Office of the District Court of the United States for the Southern District of New York.' Published from Colton's 172 William Str. Office in New York City. Exceedingly rare.

Good condition. Minor stains in Young Territory and along the border in the upper right quadrant. Minor verso repair and reinforcement along original fold-lines. Attached to original brown linen booklet. Booklet itself split and detached at spine.

or Phillips.
Looking for a high-resolution scan of this?