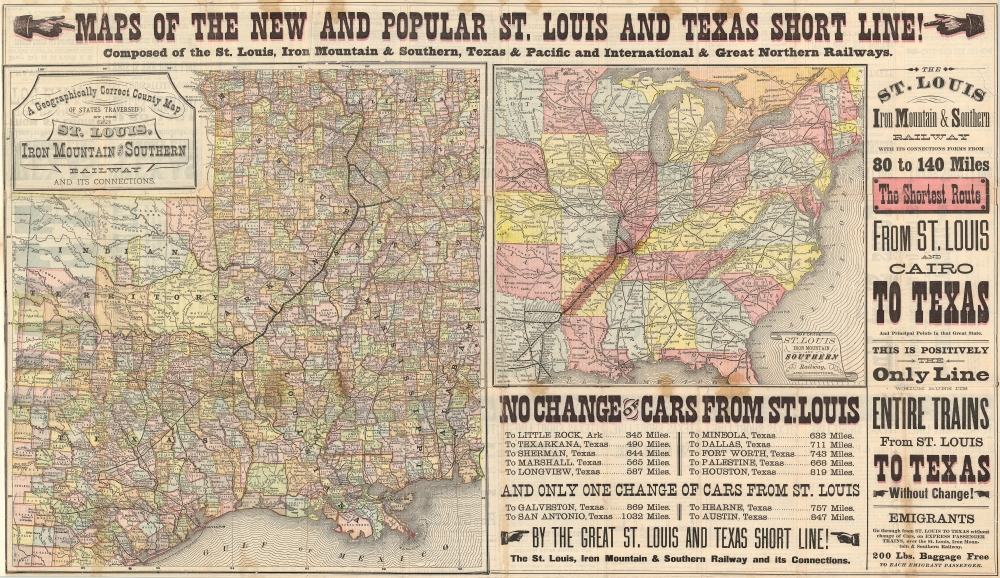 A striking 1878 promotional map broadsheet prepared to promote travel on the St. Louis and Texas Short Line. The broadsheet contains two maps. The smaller map, at right, illustrates the eastern United States with the route of the St. Louis, Iron Mountain, and Southern Railway highlighted. A second much larger map, occupying the left side of the page, provides a greater detail view of the Short Line noting all stops between Saint Louis and Texarkana, where it connects to other lines extending throughout Texas. The broadsheet is surrounded by advertising promoting the railroad as the shortest route from St. Louis, Missouri and Cairo, Illinois, to Texas, and offering 200lbs of luggage free to emigrant passengers. The map is printed on the verso with advertisement for various services associated with the railroad.

The St. Louis, Iron Mountain and Southern Railway was a railroad that ran thorough Missouri and Arkansas connecting St. Louis, Missouri and Cairo, Illinois with Texarkana, Texas. The railroad was originally established to transport Iron Ore from Iron Mountain, Missouri to St. Louis. It was thus commonly known as the Iron Mountain Railway. It expanded through several mergers around 1878 to reach Texas, and was thus renamed the Texas and Pacific Railway Company. The railroad further expanded acquiring other connecting rail lines until 1883, when it was absorbed by the railroad tycoon Jay Gould expanding network. In 1917, it merged with the Missouri Pacific, which in turn merged in 1982 with the Union Pacific.

This broadsheet map was published in 1878 by the Texas and Pacific Railway Company. It was engraved and printed by the St. Louis firm of Woodward, Tiernan and Hale. We have identified examples in the Rumsey collection at Stanford and Princeton University. There are 5 sales records from 1997.

William Henry Woodward (December 11, 1834 - November 30, 1904) was an English-American printer and publisher based in St. Louis. Woodward was born in Hereford, England. He moved with his parents to the United States in 1841-2, when his father had a disagreement with the Church of England, moved to New Jersey, and was ordained an Episcopal Minister. The family moved between churches, in Pennsylvania, Michigan, Wisconsin (1849 - 1851), before finally, in 1851-2, settling permanently in St. Louis. W. H. remained in Madison, where from 1849 to 1852, he apprenticed in the printing trade under Col. David Atwood, publisher of the Wisconsin Statesman. In St. Louis, he began his work in the printing trade at the Missouri Republican, at the time the main regional paper. He attained some success and leverage his savings to purchase the printing concern of George H. Hanson. Woodward establishment quickly gained reputation for solid work promptly delivered. During the Civil War, Woodward was recruited into the Missouri Home Guard and saw active service under General. E.C. Pike. In 1868 James Tiernan (1838 - September 16, 1886), a former colleague from the Missouri Republican joined the firm, after which the imprint changed to 'Woodward and Tiernan.' The business also moved to the intersection of Third and Pine. In 1872, William B. Hale also joined the partnership, and the imprint was changed again, this time to 'Woodward, Tiernan and Hale.' The business moved again, this time to the intersection of Second and Locust. Hale retired in 1882, causing the firm's imprint to revert to 'Woodward and Tiernan.' Tiernan passed away in 1886, just as the firm was preparing to move into even large quarters ate 309-315 North Third Street. Woodward acquired Tiernan's shares and reorganized the firm as the 'Woodward and Tiernan Stock Company.' Under Woodward's management the company grew to become a major concern employing some 800 people and occupying several factories. Woodward died of a heart attack at the St. Louis Club in November of 1904. Learn More...