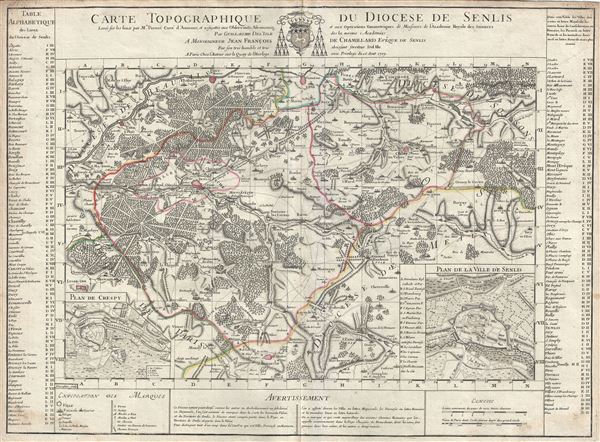 This is an attractive example of the 1709 Guillaume De L'isle topographical map of the Diocese of Senlis, France. It covers the region north of Paris from Pont-Sainte-Maxence south to Dammartin-en-Goele and from Gouvieux east as far as Bonneuil-en-Valois. The map renders the entire region in extraordinary detail offering both topographical and political information with forests and cities beautifully rendered in profile. The map also notes several abbeys, priories, water mills and wind mills and Roman roads. The towns of Senlis, Crepy-en-Valois, Creil, Dammartin-en-Goele, Pont-Sainte-Maxence, Chantilly and Betz are identified. The region lies in the Oise department of France and is part of the Picardy region of France. The map includes two insets in the lower left and right quadrant featuring a 'Plan de Crespy' and 'Plan de la Ville de Senlis' respectively. An alphabetical table listing the places in the Diocese of Senlis is featured along the left and right borders. The top of the map includes the title along with the coat of arms of Senlis while the bottom features a key, a scale as well as an 'avertissement.' This map was created by Guillaume de L'isle in 1709.