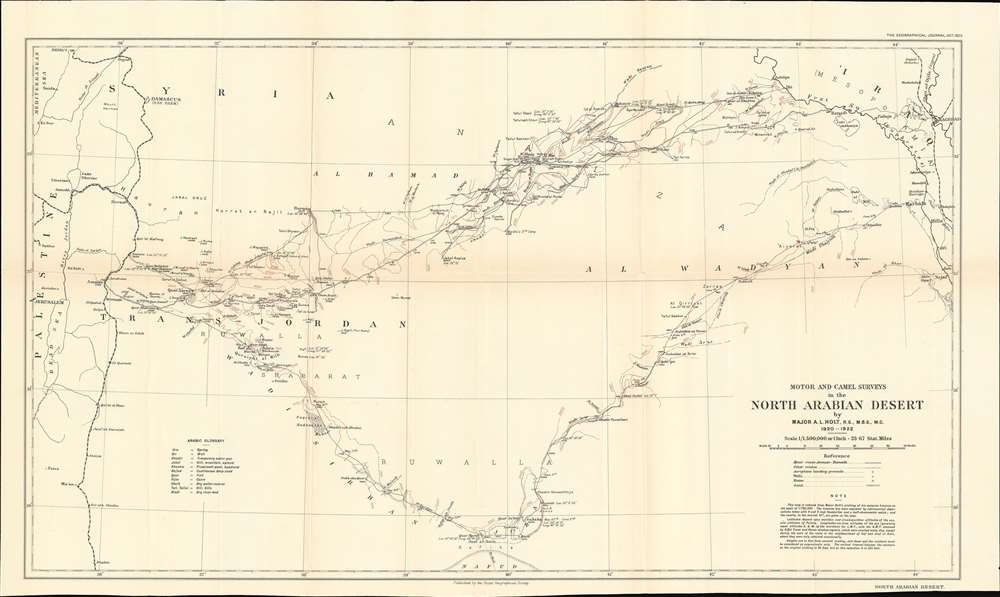 Surveying for the never-built Haifa-Baghdad railroad.
$500.00

This is a 1923 A. L. Holt map of Syria and Lebanon as well as parts of Iraq, Saudi Arabia, and Palestine / Israel. Coverage extends from Jerusalem to Baghdad, and from Beirut to Jauf and the Nafud. The map highlights the motor route from Amman to Ramadi, along with other overland routes. Railways connecting Beirut, Damascus, and Amman with points farther south are also noted.

A.L. Holt and the Haifa-Baghdad Railway

Major A.L. Holt (1876 - 1971), a British military officer and Royal Engineer, spent the early 1920s in the deserts of Arabia surveying routes for the Royal Air Force. From 1920 through 1922, Holt laid out the system of landing fields for R.A.F. service route between Cairo and Baghdad. While doing so, he also surveyed a projected route for the proposed Haifa-Baghdad Railway. This railway was intended to be a high-speed transport for goods and raw materials traveling between Baghdad and Haifa. A British-controlled port on the Mediterranean, Haifa was the planned distribution hub for goods from points farther east, including British India. The railway was projected to be two weeks faster than a sea voyage through the Suez Canal and would be able to carry many times more freight than airplanes. There also was an intention to connect the Haifa-Baghdad railroad to proposed rail routes in Persia and India, potentially creating a true transcontinental railroad through southern Asia.

In early 1922, Holt encountered Harry St. John Philby (1885 - 1960), a British Arabist and colonial office intelligence officer. Holt accompanied Philby on an expedition to Jauf hoping for an opportunity to survey an alternate route for the railroad. The map follows Philby's and Holt's route with dates chronicling the party's progress. The two men spent three days in Jauf before continuing east to Sakaka to visit the Sultan. From Sakaka, after being 'detained' for over a week, Philby and Holt continued east to Karbala. They finally reached Karbala over one month after leaving Amman.

A Railroad that Never Was

The proposed Haifa-Baghdad railroad was never built. First, the borders between British-controlled areas and other parts of the region were fluid at best and the British wanted to be certain that they would be able to control the entirety of the railroad. Second, existing tribal conflicts caused concerns over the railroad's security. Third, British officials were reticent to invest in an empire in the unstable Middle East. Finally, Holt completed most of his surveying by car (hence the title of this map 'Motor and Camel Surveys…'), and by 1923 automobile transportation across the desert had been proven more practicable. This prompted other individuals (curiously Holt was not among them) to establish overland autoroutes from Damascus to Ramadi, and in doing so eliminated the need for a rail connection

This map is a reduced edition of a manuscript map created by Major A.L. Holt from his surveys. The Royal Geographical Society published it in the October 1923 edition of The Geographical Journal. No examples are cataloged in OCLC, and it rarely appears on the private market.

A. L. Holt (1896 - 1971) was a British explorer and military officer. As a member of the Royal Engineers in the 1920s, Holt led several motorized expeditions through the Arabian deserts. For these exploits, the first to utilize large convoys of motor cars on long desert journeys, Holt selected Ford cars. Holt also surveyed and proposed a route for a trans-Arabian railway using Fords, which covered 350 miles. Unfortunately for Holt, the railway was never constructed. Learn More...