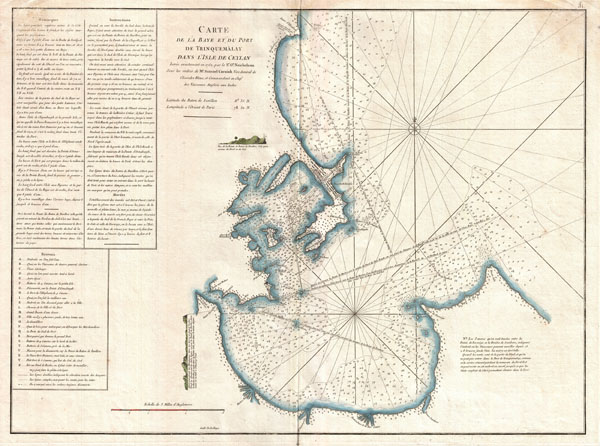 An extremely attractive large format 1775 maritime map or nautical chart of the port of Trincomalee, Ceylon (Sri Lanka) by Jean-Baptiste d'Après de Mannevillette. Trincomalee is natural deep water port on the east coast of Sri Lanka, about 110 miles northeast of Kandy. It is one of the main centers of Tamil speaking culture in Ceylon. Historically referred to as Gokanna or Gokarna it has been a sea port that has played a major role in maritime and international trading history of Sri Lanka. Throughout its long history Trincomalee has been an important and strategic port various colonial powers including the Portugese, Dutch, French and British. Inland detail in minimalist but marine detail is excellent with well-defined coastlines, many rhumb lines, numerous harbors and ports noted, and countless depth soundings. Detailed sailing instructions fill the upper left quadrant. Mannevillette's chart marks a considerable advancement over previous nautical maps of this region. Engraved by De La Haye for Jean-Baptiste d'Après de Mannevillette's 1775 Neptune Oriental.