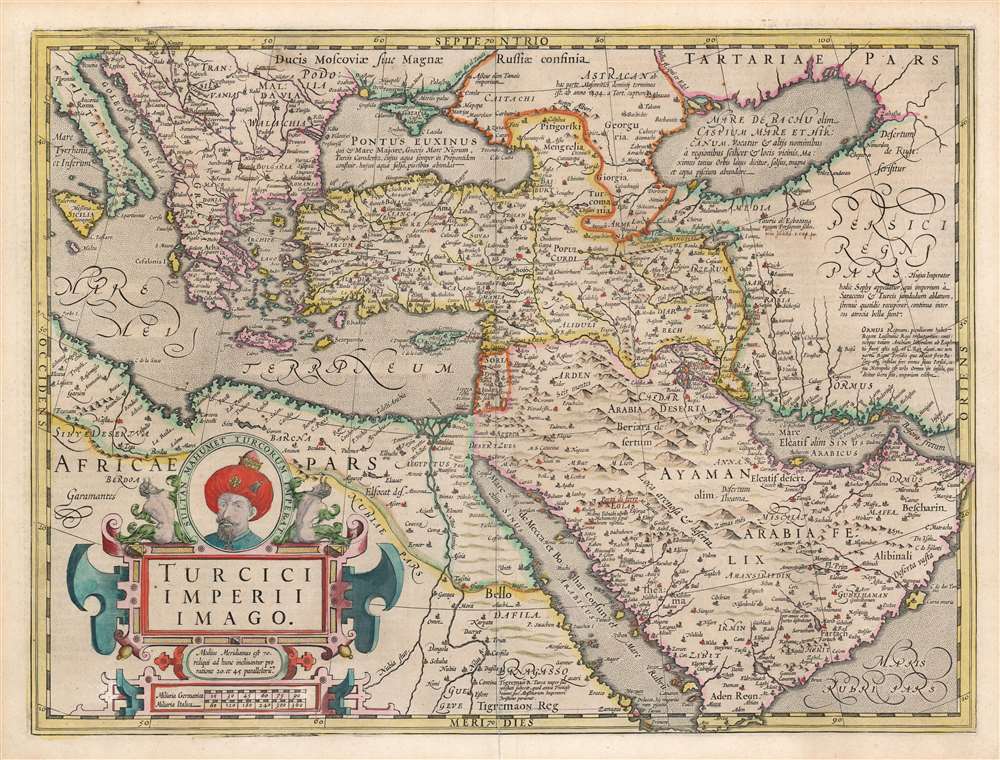 A Classic Dutch Map of the Eastern Mediterranean, Arabian Peninsula and the Near East.

This is Jodocus Hondius' 1606 map of the Turkish Empire. It is among the maps Hondius added to Gerard Mercator's Atlas after having acquired the copperplates for Mercator's essentially unfinished work. While many of the maps Hondius added replaced earlier Mercator maps in the Atlas, this one had no earlier analog and was thus entirely new to the book. This very attractive example is from the 1633 German edition of the atlas.

Some of the textual matter of the map - the gloss on the Kingdom of Ormus, for example - is drawn from Ortelius' Turcici Imperii Descriptio, who in turn drew heavily on the work of Giacomo Gastaldi.

The map shows the eastern portion of the Mediterranean, including Italy and Sicily, and extends eastward to show the whole of the Arabian Peninsula, the Persian Gulf, (Mare Elcatif olim Sinus Arabicus on the map) and the Caspian sea. Ranging north to south, the map extends from the southern part of Russia and Muscovy, reaching sufficiently southwards to include all of the Red Sea and much of the Lower Nile.

The map's ornate title cartouche features a medallion with the portrait of a turbaned potentate, labeled 'Sultan Mahumet Turcorum Imperat.' This is Mehmed III, (May 1566– 22 December 1603) who was Sultan of the Ottoman Empire from 1595 until 1603.

This map first appeared in Jodocus Hondius' 1606 Atlas, and would continue to be included in editions of that work up through the French edition of 1639-44. About thirty examples of the separate map appear in institutional collections. OCLC lists four examples of the German edition of the Hondius atlas in institutional collections, although the work is well represented in other languages. The map appears on the market from time to time in varied condition.