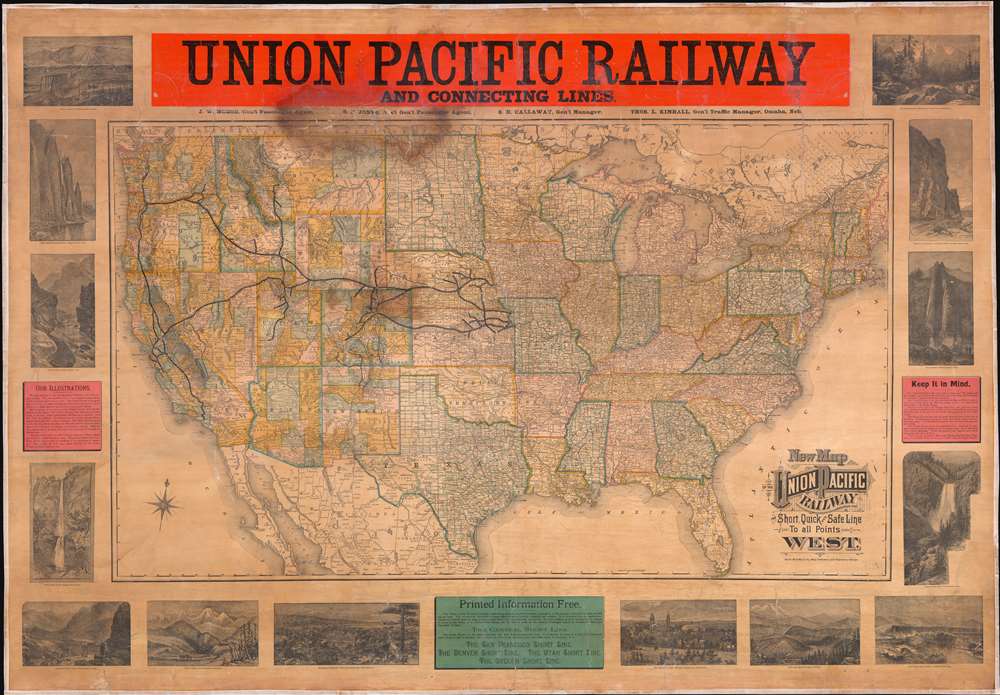 This rarity is a large format 1887 wall map of the United States issued by Rand McNally and Company on behalf of the Union Pacific Railroad. This scarce railroad map was issued exclusive for company use at larger stations, and was not publicly distributed, hence its extreme rarity. There are no other examples of the current map known, but the Library of Congress does own an earlier 1883 edition. The map embraces the whole of the United Sates, illustrating the routes of the Union Pacific Railroad and its many subsidiaries, as well as, in some cases, important connecting routes operated by competing railroads. The map is surrounded by 14 vignette views engraved by the Matthews Northrup Company illustrating the spectacular sights and geographical oddities to be observed along the Union Pacific routes. Further textual advertisements promote the Union Pacific as the shortest, quickest, and safest route westward.

The map unabashedly promotes the luxury, sophistication, and economy of the Union Pacific Railroad network. Text at right of the map reads,

And of course, they were correct. There were competing routes, but none offered the size and flexibility of the Union Pacific. By the early 20the century the Union Pacific had absorbed most competing lines and is today one of the world's largest railroad concerns.

The Union Pacific turned to the Buffalo, New York, publishing and engraving firm of Matthews Northrup to provide the 14 vignette views surrounding the map proper. The engraved views were intended to encourage tourism on the Union Pacific by illustrating the natural wonders to be seen along the way, among them Devil's Gate, Weber Canyon (Utah), Multnomah Falls (Oregon), Cape Horn Columbia River (Washington), Ogden (Utah), the Tetons (Wyoming), and Devil's Slide (Utah), among others.

Changes to from the LOC 1883 Edition

We have noticed certain disparities between this and the 1883 LOC edition, most focusing on railroad development in Colorado, Nebraska, Washington, Oregon, and Kansas. These include the addition of the Belleville line in Kansas, which opened for operation in 1884. Also, in Custer county, Nebraska, the city of Broken Bow appears for the first time as the terminus of a railroad route. This route is present on the 1883 LOC map as well, despite the fact that it was not complete and operational until 1886, but Broken Bow is there identified as 'New Saint Helena' (perhaps an alternate name choice?). While our map is slightly more detailed, as one would expect form a later edition, the LOC map identifies more stops on the Union Pacific's Broken Bow line, while our map offers a more sophisticated layout of the 'Ord' line. In Colorado, our map exhibits significantly increased development to the south west of Denver, particularly in the vicinity of Gunnison. It also notes the narrow gage Denver and Rio Grande Western Railroad extending westward to meet with the Union Pacific a Provo City, Utah. There is a completely revised track configuration in Idaho and Montana in the vicinity of Missoula, Helena, and Virginia City. The most significant difference between editions is the addition of the Oregon and California Railroad, which was completed in 1887 and absorbed into the Southern Pacific system, finally directly connecting San Francisco with the Pacific Northwest.

This map is rare and likely issued in small quantities for use only in large railway stations. The only other example we have been able to identify is located in the Library of Congress. That example has a secondary title, lacking here, and an 1883 copyright, also lacking here. However, a study of the routes updated on our map (see above) allows us to firmly date this map to 1887.