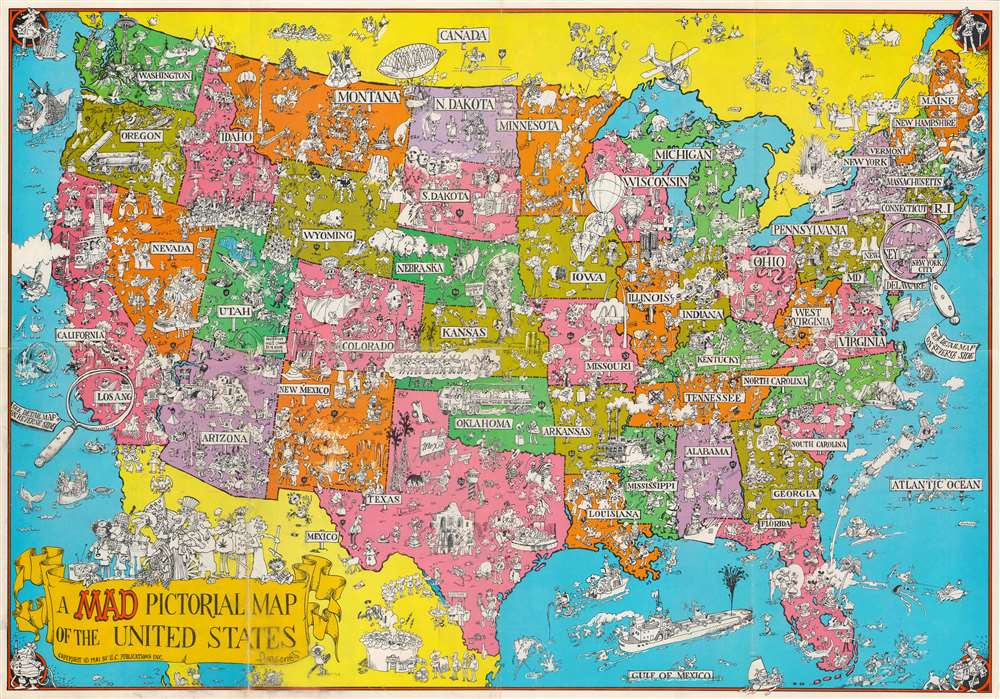 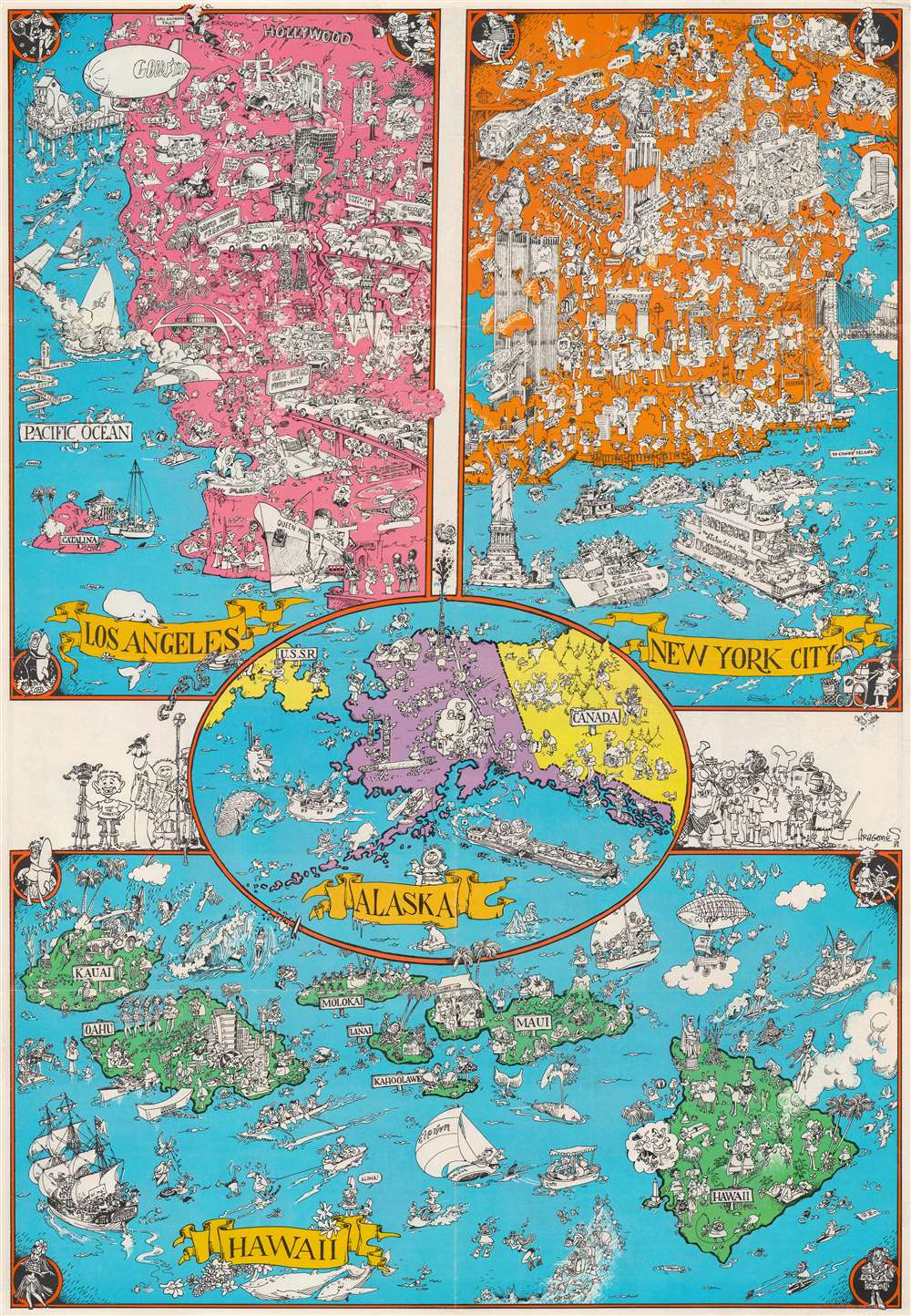 This is a 1981 Sergio Aragonés pictorial map of the United States created for Mad Magazine. Comical illustrations of people populate the map. Many of our favorites are comic scenes, including a hunter sneaking up on a herd of bison wearing a bison costume only to be spotted and confronted by one of the bison, or a ship captain yelling at someone who unplugged the lighthouse blaming him for his ship sinking. Another is a McDonald's fan proposing a second arch in St. Louis! A rocket launches from Cape Canaveral and the Wright Flyer appears over Kitty Hawk. Famous landmarks also make appearances, including the Golden Gate Bridge and San Francisco's legendary fog, the Space Needle in Seattle, and Mount Rushmore. Aragonés included himself in the piece. He is illustrated standing next to the title banner holding a pen. With all the detail present here, every look will provide the opportunity to create a new story!

Maps of Los Angeles, New York City, Alaska, and Hawaii occupy the verso. Los Angeles's legendary traffic takes center stage in that city, while LAX and Disneyland make appearances, along with the La Brea Tar Pits and the Goodyear Blimp. In New York, the World Trade Center, Washington Square Arch, Staten Island Ferry, and Brooklyn Bridge are all illustrated. Mad headquarters is included, along with Yankee Stadium and a disturbingly full subway car, complete with a stereotypically annoyed conductor. Alaska has a pipeline, a dogsled, and Soviet and American soldiers staring at each other through binoculars over the Bering Strait. Hawaii features tourists on the beach, watersports, and a tour guide describing Captain Cook's death.

Sergio Aragonés Domenech (b. September 6, 1937), a Spanish/Mexican cartoonist and writer, is known by his fans and peers as 'the world's fastest cartoonist'. Most well-known for his contributions to Mad Magazine and for creating the comic book Groo the Wanderer, Aragonés was born in Sant Mateu, Castellón, Spain. He and his family fled Spain for France because of the Spanish Civil War and settled in Mexico when Aragonés was six years old. He discovered his passion for drawing and cartoons at a young age. Apparently, as a child, his parents left him by himself in a room with a box of crayons and while they were gone, he covered the wall in hundreds and hundreds of drawings. He moved to New York in 1962 with, according to Aragonés, nothing but twenty dollars and a portfolio of drawings. He scraped by in New York trying to sell his drawings by working odd jobs around the city until he decided to try to tell some cartoons to Mad. There he met Cuban-born artist Antonio Prohías, who 'adopted' him as his 'brother from Mexico'. The Mad editors liked his work and hired him. His work first appeared in a 1963 issue of Mad, and appeared continually until 2020, a total of 491 issues, second only to Al Jaffee's 509 issues. Aragonés became famous for drawing Mad's celebrated Marginals, small cartoons inserted in the margins or between panels throughout the magazine. It has been estimated the Aragonés drew and wrote over 12,000 gag cartoons for Mad as of 2002. Aragonés also illustrated comic books, with his most famous being Groo the Warrior, which debuted in 1982. Aragonés has won numerous awards, including the Eisner Award. Learn More...

Good. Scuffing to right side of title. Wear along original fold lines. Maps of Alaska, Hawaii, Los Angeles, and New York on verso.