1904 Ohman Map of the United States and its Expansion 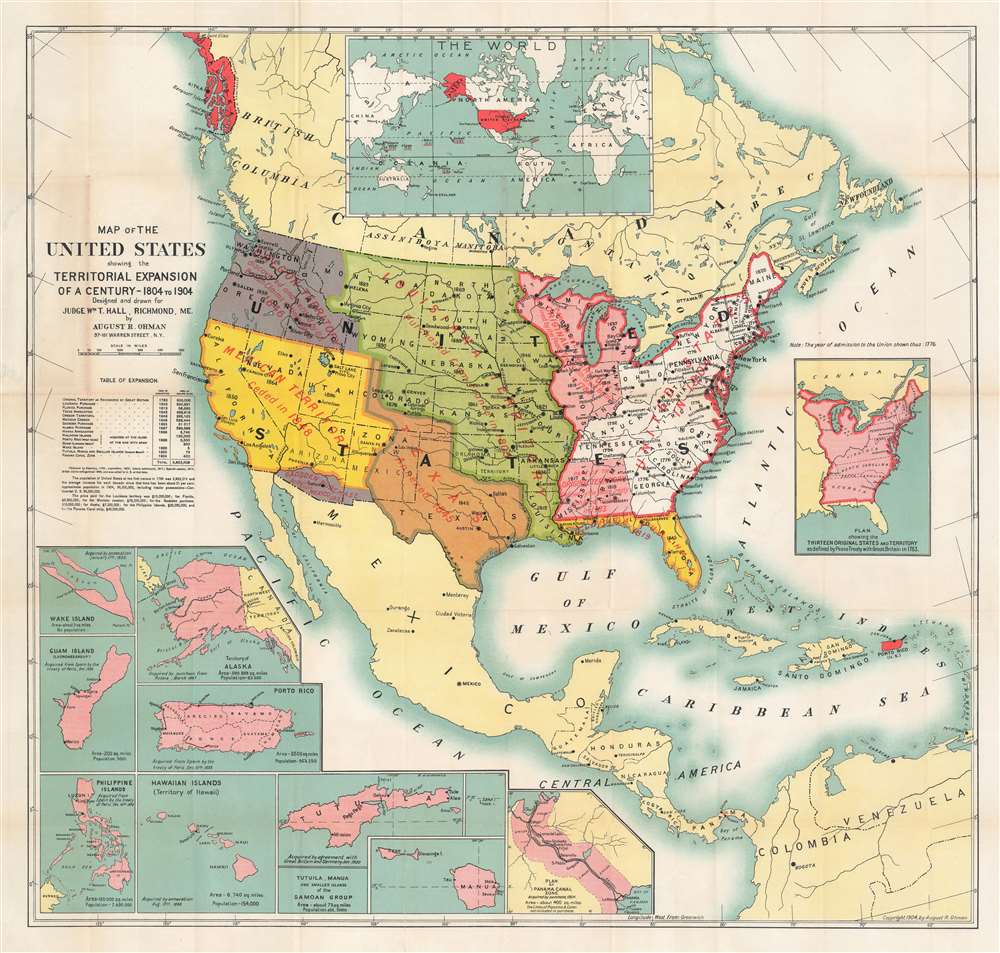 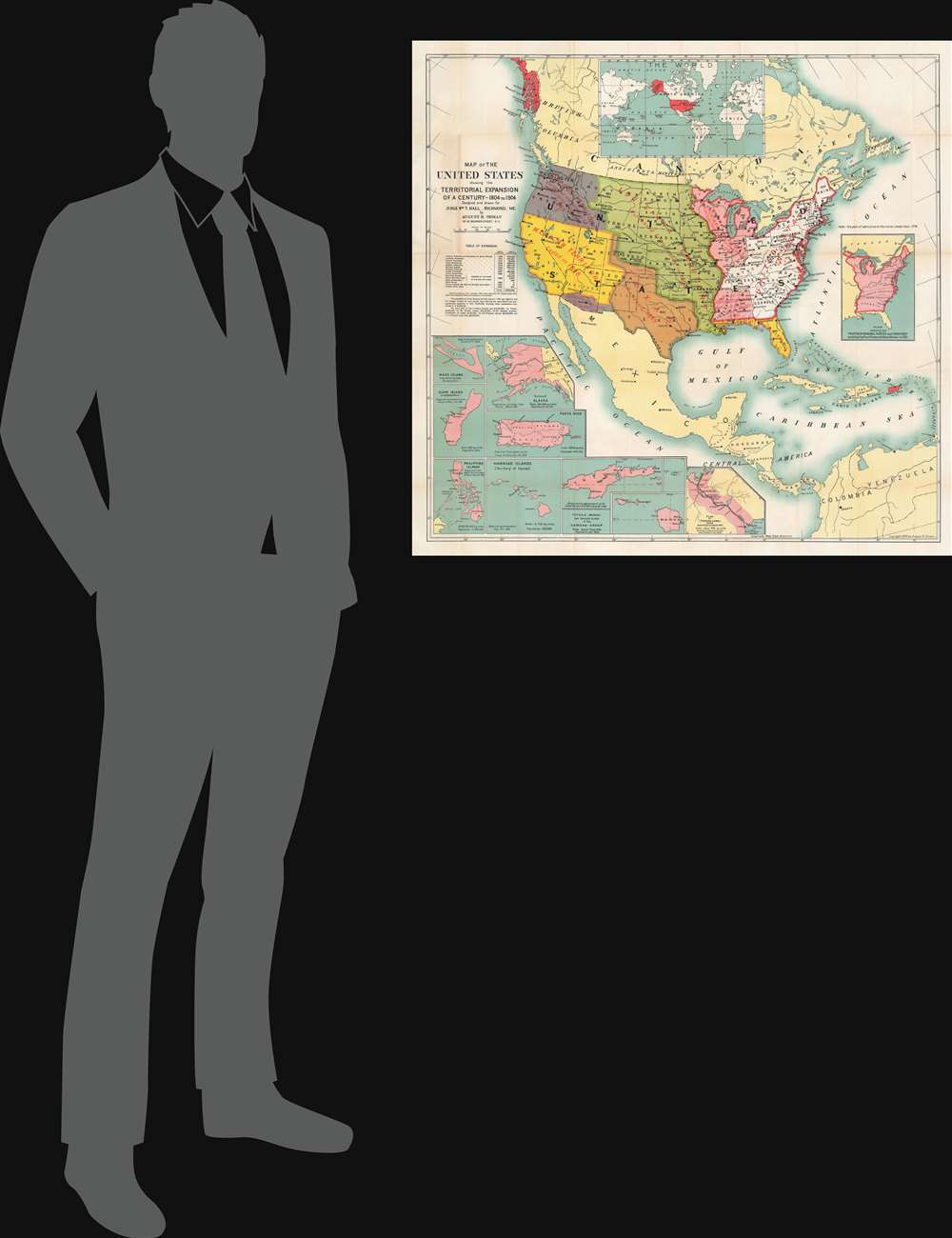 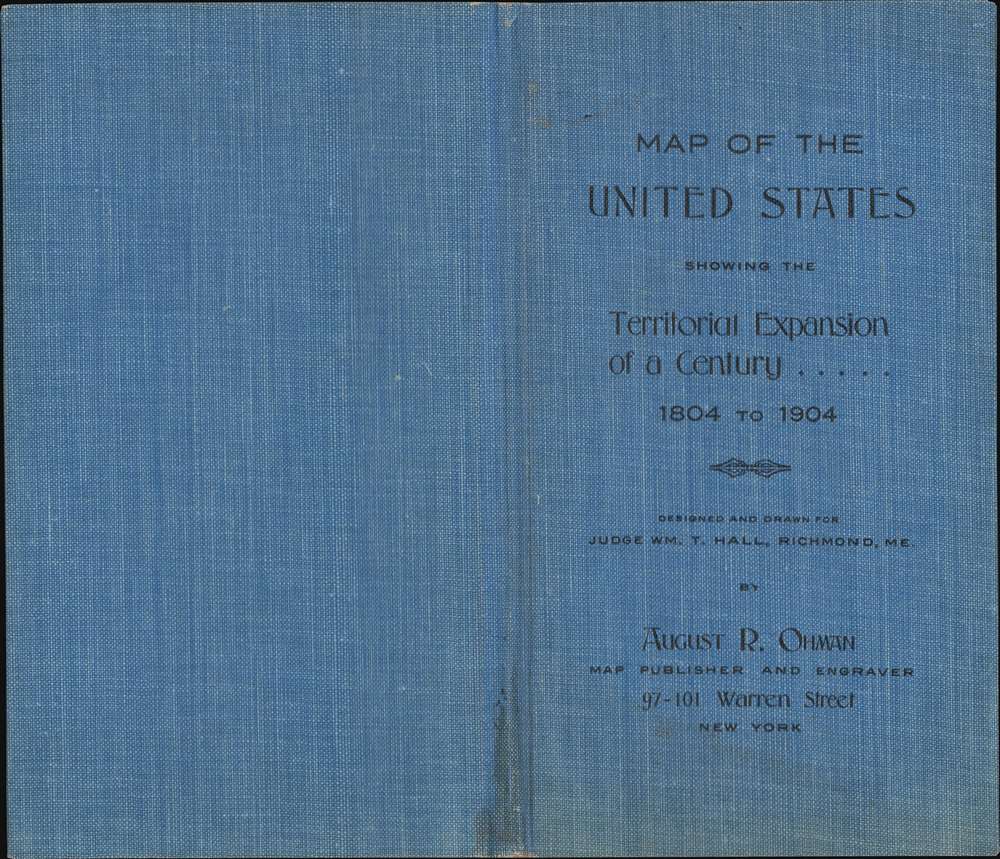 1904 Ohman Map of the United States and its Expansion

This is a 1904 August Ohman map of the United States tracing American territorial expansion from 1804 until 1904. Purchases and annexations are illustrated using different colors and labeled with the name of the territory and the date acquired. The Louisiana Territory, for example, is labeled as such with the caption 'purchased from France in 1803'. Insets in the bottom left quadrant highlight areas outside the continental United States that had been annexed, purchased, or acquired by other means, including Alaska, Hawaii, Guam, the Philippines, and Puerto Rico. An inset map of the world, situating all these disparate Pacific islands in a global perspective, appears along the top border. A table along the left border provides the area in square miles added with each of these territorial expansions.

William T. Hall (August 22, 1841 - July 10, 1915), who commissioned this map from Ohman, was an American lawyer and judge. Born in Bowdoinham, Maine, Hall studied law with Nathan Cleaves of Portland. He was admitted to the bar on August 23, 1863, and lived in Richmond, Maine, for the rest of his life. He was an active member of the community, serving as superintendent of schools in Richmond for three years. He was Sagadahoc County Attorney from 1847 until 1880 and judge of the probate court from 1880 to 1905. Hall married Elvira C. Parker with whom he had five children.

This map was created and published by August R. Ohman for Judge William T. Hall in 1904. We note only one cataloged example, which is part of the David Rumsey Map Collection. This piece is not cataloged in OCLC.

August Reinhold Ohman (May 3, 1859 - April 22, 1934) was a Swedish-American map publisher, engraver, and draftsman. Ohman arrived in the United States in 1893. He married Alice Mary Colton (1868 - 193x), Charles B. Colton's daughter, on January 5, 1897. A year later, in 1898, Ohman began working with G.W. and C.B. Colton, when the firm became known as Colton, Ohman, and Company, which existed until about 1901. After that year, Ohman operated his own firm under his own name August R. Ohman, and advertised his firm as the 'successors to the Coltons'. The Ohman Map Company, as it became known, moved to 258 Broadway around 1914, where it operated until around 1925. George J. Nostrand, who became a major map publisher, operated in the same buiding and possibly even worked for Ohman. Some of Nostrand's work is very similar to Ohman's, particularly his bird's eye view of New York City. Learn More...