1835 Las Cases (Lesage) and Renouard Map of the United States 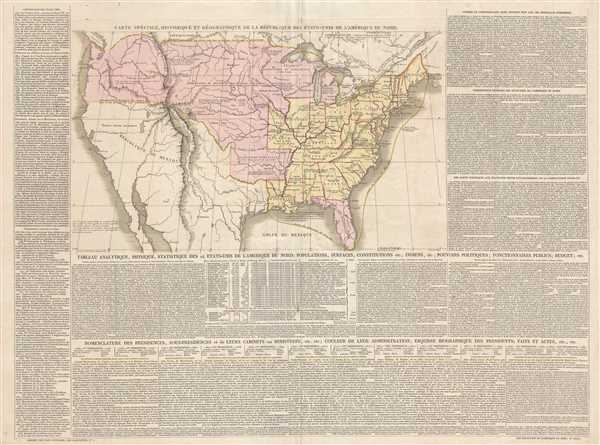 1835 Las Cases (Lesage) and Renouard Map of the United States

Labels Texas, then a part of Mexico.

This is a c. 1835 Emmanuel, Comte de Las Cases and Paul Renouard map of the United States. The map depicts the region from the Pacific Ocean to the Atlantic Ocean and from Canada to northern Mexico. Highly detailed, each state that had been admitted to the Union by 1820 is illustrated and labeled, although the borders of Missouri, Illinois, and Indiana are not illustrated as they would appear on a modern-day map. The territorial borders of the United States reach from coast to coast, although the U.S.-Mexico border is fixed at the 42nd parallel, then roughly follows the Arkansas River until it takes a sharp turn south to meet the Red River. Each state is outlined in red and by a dashed and dotted line. Short notes and commentaries on the country or town in question are scatt4ered throughout, allowing for the reader to more deeply interact with the map. Numerous cities, including all the state capitals, are labeled, along with rivers and lakes. Paragraphs of information frame the map on three sides and contain information concerning the history of the United States, a table listing the former President and their Cabinets, and a statistical history of the 24 states of the United States of North America.

Emmanuel-Augustin-Dieudonné-Joseph, comte de Las Cases (June 21, 1766 - May 15, 1842) was a French historian and atlas maker. Born at the family's castle near Revel in Languedoc, Las Cases was educated at military schools in Vendôme and Paris. He then entered the navy where he saw action during the years 1781-82. He was forced to flee France during the French Revolution, and spent several years in Germany and England. He took part in the Quiberon Expedition in 1795 (an invasion of France on the Quiberon peninsula by émigré ,counter-revolutionary troops in support of the Vendée Revolt) that was soundly defeated by the Republican army. Las Cases was one of the few to return to London alive. In 1801 he published the first edition of his Atlas Historique under the pseudonym A. Lesage. Upon his return to France after the Peace of Amiens in 1802, Las Cases published the first French edition of his atlas in 1803-1804 called the Atlas historique, généalogique, chronologique et géographique de A. Lesage. Las Casas returned to France during the Consulate and, with other royalists, rallied to the side of Napoleon Bonaparte. Las Cases would support Napoleon throughout his reign, and was eventually made a chamberlain and then a count of the empire. After the first abdication in 1814, Las Cases again fled to England, but returned to Napoleon's side during the Hundred Days. After the defeat at Waterloo, Las Cases was the one who suggested Napoleon throw himself at the mercy of the British Empire and later accompanied him to Saint Helena. It was on Saint Helena where Las Cases acted as Napoleon's secretary, taking detailed notes of their conversations. These notes were then published in book form following Napoleon's death as Le Mémorial de Sainte-Hélène, which is remembered as a less-than-neutral account of Napoleon's time on Saint Helena.


Jacques-Marie Hacq (September 22, 1785 – 18??) was a French letter and line engraver, and historian, active in Paris during the middle part of the19th century. Hacq was born in Paris and trained under J. P. Besançon, who he succeeded at the Dépôt de la Guerre in 1830. He engraved for the Dépôt de la Guerre as early as 1830 and for the Dépôt des Cartes et Plans de la Marine from, at least, 1840 to 1852. In addition to his work for the French Government, he also completed maps engravings for Lesage, Lapie, Dufour, Duperrez, Gouvion St. Cyr, and Dumont d'Urville. His historical works include a history of the Napoleonic Wars and a history of Paris under the reign of Louis XIII. During most of his career in paris he lived at 58 Rue de la Harpe.


Paul Renouard (1803 - 1871) was a French printer and publisher. He was the third son of the famous Parisian bookseller Antoine-Augustin Renouard. He was active in the book printing and publishing worked until 1849 when he retired and began a career in the foreign service in Asia.