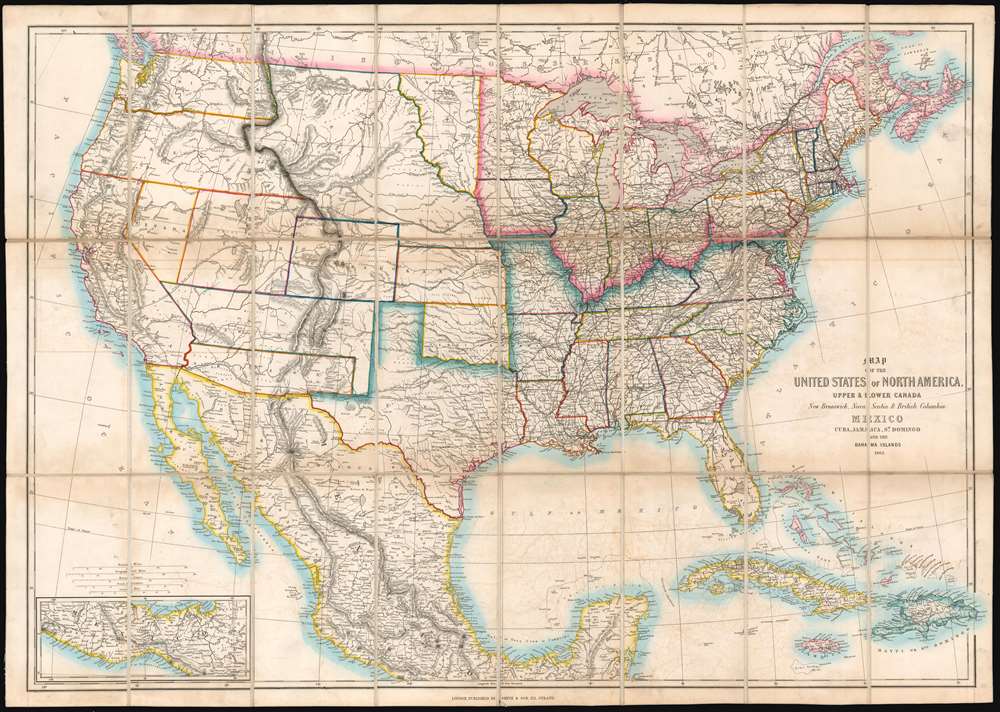 Likely published to benefit from interest in the American Civil War in Britain.
$1,950.00

This is an 1862 'Smith and Son' map of the United States during the American Civil War. Likely created to capitalize on British interest in the conflict, the map depicts from the Pacific Ocean to the Atlantic Ocean and from Canada (labeled as British Possessions) to the Yucatan Peninsula and the West Indies. The railroad network throughout the eastern United States is illustrated here in detail, with constructed railroads indicated by two parallel black lines with shorter lines resembling railroad ties connecting the two. Interestingly, further west prospective railroads are noted by two parallel lines without the railroad ties, including the proposed transcontinental routes.

The American Civil War - The Union and the Confederacy

Capturing a crucial and truly pivotal moment in American history, the geography presented here encapsulates both the fluid nature of the period and, in many ways, the unclear boundaries of the American West. Beautifully colored, perhaps the most striking aspect of this aesthetic is the division between the Union and the Confederacy. The Confederacy, most of the American southeast, is bordered in a bright blue, which created a stark contrast with the red used to highlight the Union States.

Intriguingly, as they are illustrated here, both the Union and Confederacy do not extend into the western territories, with the exception of Texas, which had been admitted as a state on December 29, 1845. This leaves a large portion of territory then claimed by the United States, including the state of California, unaffiliated. Maps of the United States in 1862 vary in their depiction of the geography of the western territories and states, although some events are notably concrete. These include the admission of Kansas as a state on January 29, 1861, and the organization of the Colorado Territory on February 28, 1861. The boundaries of the Washington Territory and Oregon, which was admitted as a state in 1859, are illustrated here more in their original territorial configurations. Others, such as the boundaries of the Nebraska Territory, the unincorporated Dakota or Dacotah Territory, and the Nevada, New Mexico, and Utah Territories are much more fluid. Perhaps the most intriguing aspect of the geography of the American West presented here is the inclusion of Confederate Arizona and the 'L' shape of the New Mexico Territory, which we have not encountered on any other map.

Another intriguing aspect of this map's geography is the depiction of the unincorporated territory of Dacotah, or as it is labeled here Dakota. This is strange because this territory existed during the nearly three year period between Minnesota's statehood on May 11, 1858 and the creation of the Dakota Territory in March 2, 1861, when the portion of what had been the Minnesota Territory that fell between the Missouri River and Red River, Minnesota's newly-created western border, remained unattached to any official territory of the United States, as it is illustrated here. But, as is stated above, the official Dakota Territory was created on March 2, 1861, meaning that the boundaries as they exist here are out of date, which also reflects on the border of the Nebraska Territory as they appear here as well. When the Federal government formed the Dakota Territory, it included most of present-day Montana, Wyoming, and both North and South Dakota which created today's northern border of Nebraska.

Railroads and the American Civil War

Railroads, which are depicted here in detail, played a critical role in the American Civil War and served as lifelines for both the Union and Confederate armies. Instead of an army supplying itself off the bounty in nearby cities, arms, supplies, men, and other necessities could be sent directly to the army by rail, which allowed the battles to occur farther away from the populated areas, unlike in earlier wars. Every battle during the war was fought within twenty miles of a rail line, and the Union targeted rail junctions in the South, such as Corinth, Mississippi and Atlanta, Georgia.

This map was created and published by Smith and Son in 1862. The OCLC records examples as being part of the institutional collections at the University of Texas at Arlington and The British Library. We are also aware of an example which is part of the Wellcome Collection in London.