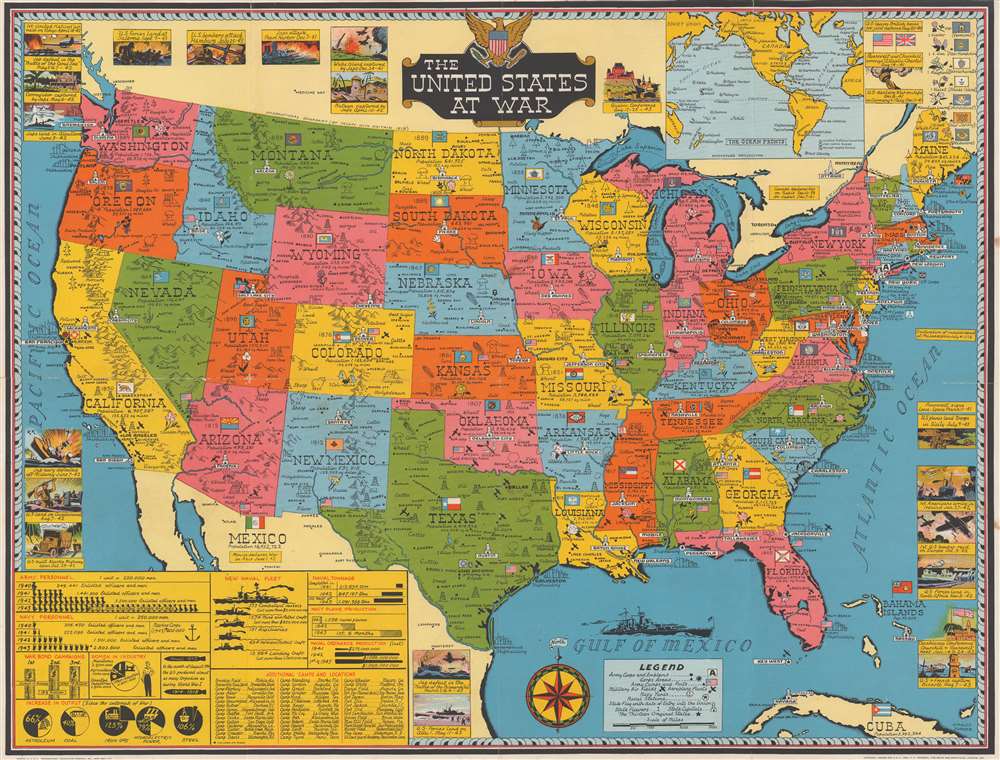 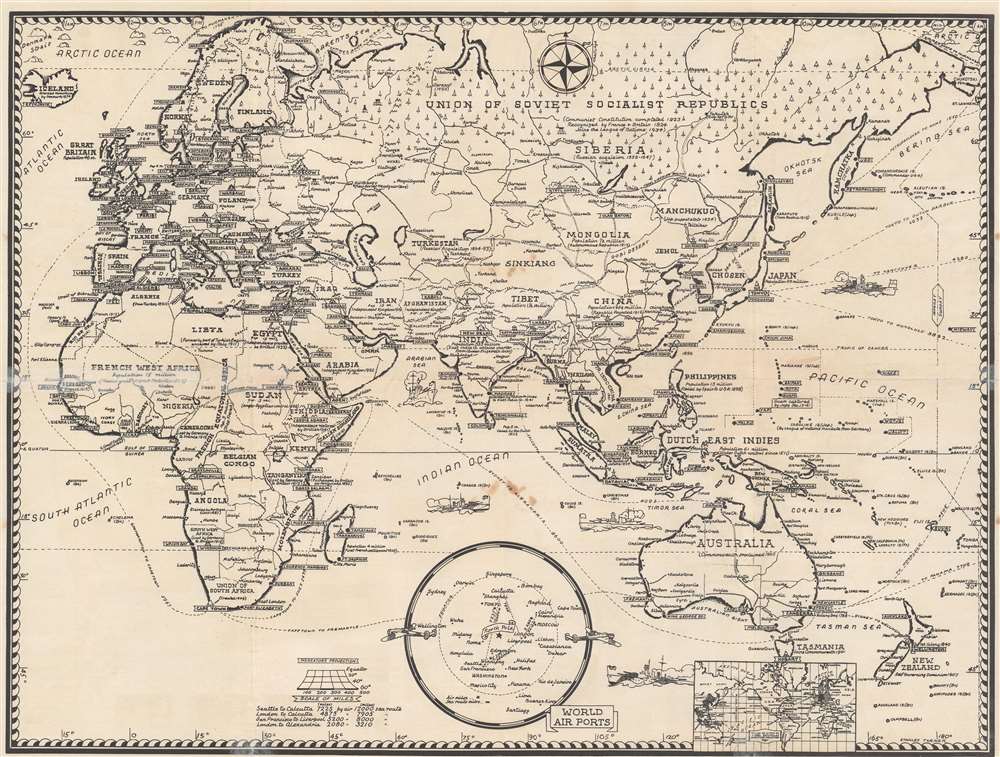 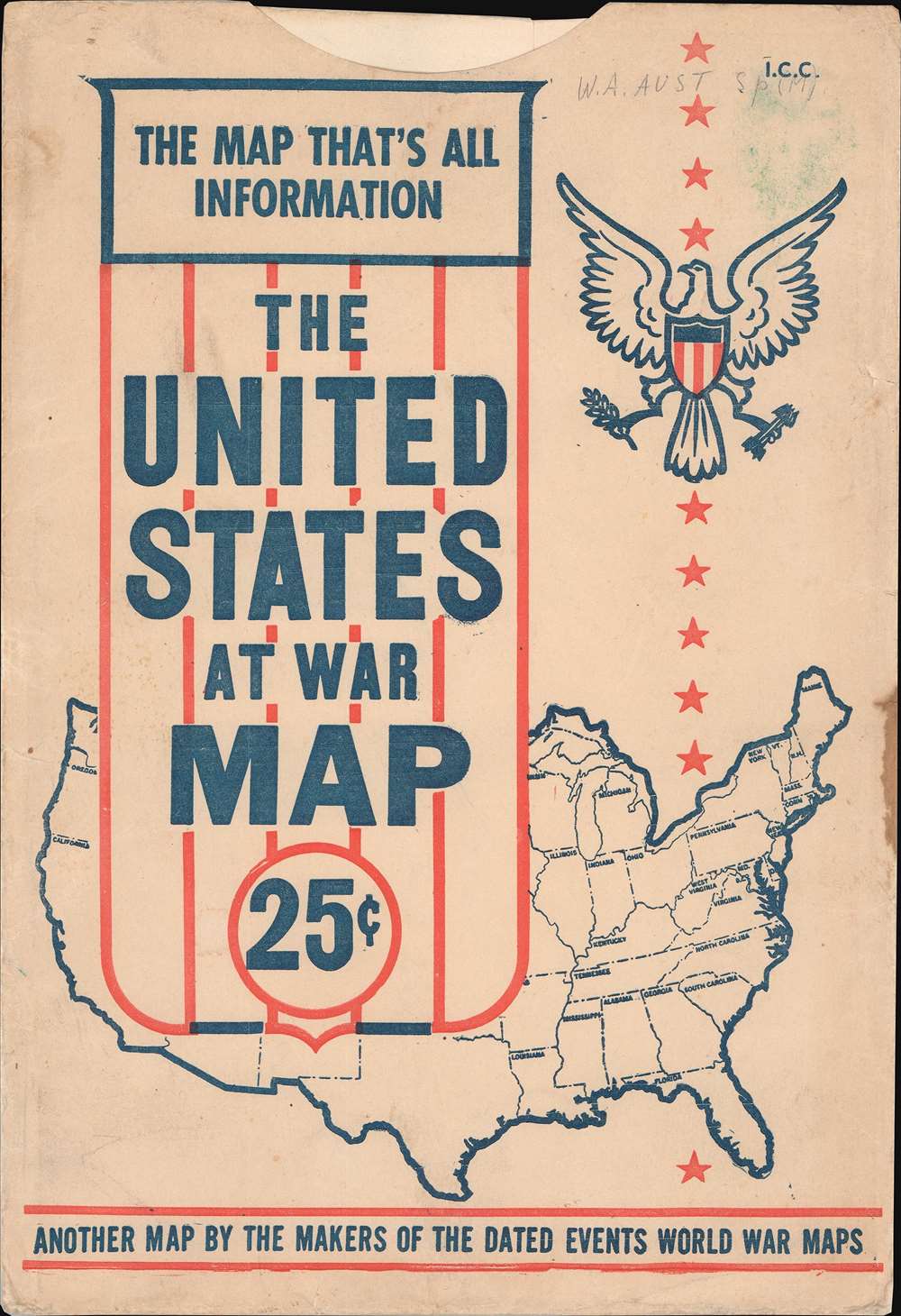 Emphasizes America's rearmament and the revitalization of the economy.
$450.00

This is a 1943 Stanley Francis Turner map of the United States during World War II. This map emphasizes the burgeoning industrial strength of the United States and its effect on the Allied war effort. Natural and human resources are illustrated in each of the forty-eight states, from iron ore, coal, wheat, and livestock, to hydroelectric power and shipbuilding. Nearly every major coastal city was involved in building ships for the navy. Army headquarters are labeled by flags, while army corps are illustrated and labeled using their insignia.

Captioned vignettes encircle the map, highlighting events in the war involving Americans. These are mostly Allied (American) victories, although not exclusively, and include the Japanese attack on Pearl Harbor, the fall of Wake Island and Corregidor, U.S. landings in North Africa, on Guadalcanal, and at Salerno, and U.S. naval victories in the Battle of the Coral Sea and the Battle of Midway. An infographic situated in the lower left visually presents the American military buildup, allowing the viewer to easily recognize the extreme growth in military personnel, war bond successes, and the output of natural resources and war materiel, such as torpedoes, ships, planes, and other ordnance. A legend at bottom center explains the different notations used. An inset map of 'the ocean fronts' is included along the top border.

The flag of each state is illustrated and appears alongside the state's flower, the year it was admitted into the Union, its population and its area in square miles. Myriad cities, towns, and villages are labeled from coast to coast, with the state capitals meriting their own symbols. Railroads, rivers, and mountain ranges are also illustrated. The map is accompanied by its original sleeve.

This map was produced by Stanley Francis Turner and published by C. C. Petersen Publishing and Advertising in 1943. We note four examples cataloged in OCLC which are part of the collections at Pennsylvania State University, the University of Georgia, the University of Illinois at Urbana Champaign, and Texas A and M University.

Stanley Francis Turner (1883 – 1953) was a visual artist and painter based in Toronto, Canada. Turner was born in Aylesbury, England. He studied art in London at the South Kensington School before migrating to Canada in 1903, where he studied at Ontario College of Art under George Reid and J. W. Beatty. Turner is best known as a painter and designer capable of working in a variety of mediums. During World War II, Turner took a contract with the Globe and Mail to illustrate pictorial maps of war events. Turner may have maintained the rights to his war maps, as he also seems to have had a contract with the advertiser and publisher, C.C. Peterson, also of Toronto, to publish and distribute his maps in the United States. Turner's maps are information dense and designed to illustrate the events of the war in an easily digestible pictorial format. Turner experimented with different ways of working with the cartographic ranging from simple Mercator projections to more contemporary equal-area projections. In 1930, Turner was elected an Associate of the Royal Canadian Academy of Arts. He died in Toronto in 1953. Learn More...


C. C. Peterson (fl. c. 1940 – 1950) was an advertising and publishing company based in Toronto Canada, but with distribution and licensing in both the United States and Canada. Peterson had contracts with the artist Stanley Francis Turner to publish pictorial 'war maps' during World War II. The company supplemented its income by selling advertisements on Turner's maps. Learn More...