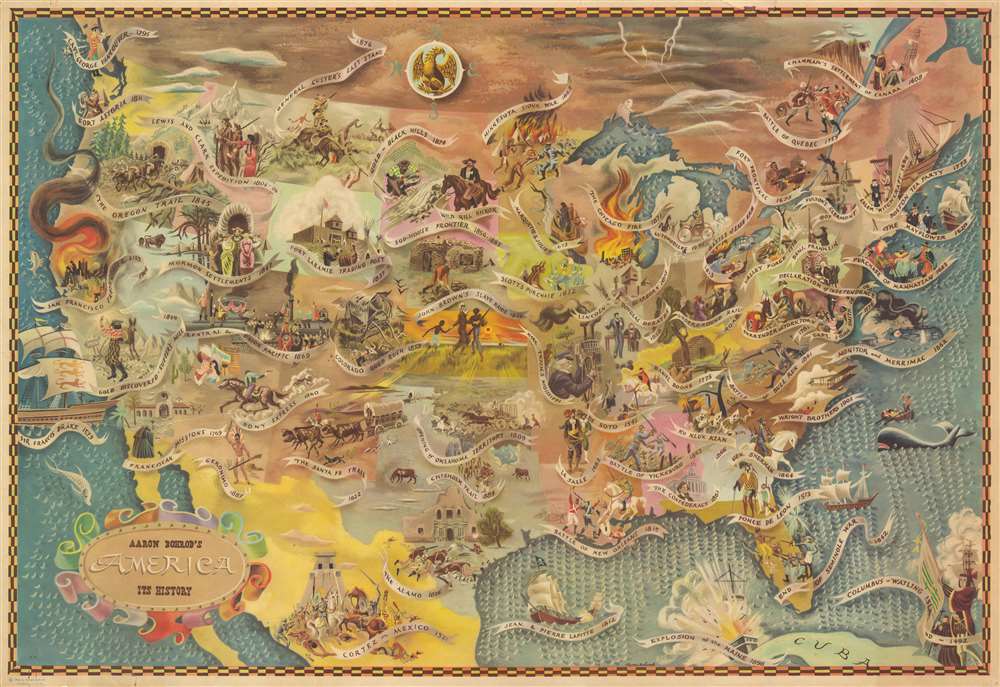 A stunning 1946 social realist pictorial-historical map of the United States by the Bessarabian-Jewish-American artist Aaron Bohrod. The map covers the United States, northern Mexico, and Southern Canada from Atlantic to Pacific and from the mouth of the St. Lawrence River to Cuba. The map centers on a dramatic illustration of John Brown's Slave Insurrection during the Bleeding Kansas Crisis of 1856. From here it expands in all directions to include vignette illustrations of American History from Columbus' arrival in 1492 to the 1909 San Francisco Earthquake and Fire.

A Hard Critique of American History

According to Stephen J. Hornsby in Picturing America,

Bohrod's sweeping and popular depiction of American history owes much to the murals he and other artists designed for the Treasury Department's Section of Fine Ars during the 1930s. John Brown's Slave Raids in Kansas set against a glowing sun create a powerful central image for the map.

The illustration does little to sugar coat the dark side of American history, offering in the process Bohrod's harsh critique of the country's inequalities and failings. Some of the more disturbing scenes including Daniel Boone shooting Indians in front of his cabin, the Ku Klux Klan, American settlers trading Alcohol with American Indians at Fort Laramie, and the 1876 slaughter at Little Big Horn.

As far as we are able to determine, this is Bohrod's only map. It was published in 1946 and was instantly popular for its fine draftsmanship and vivid imagery. Like much of his work, this map was sold through the Associated American Artists. The OCLC identifies examples at the Library of Congress, the Wisconsin Historical Society Archives, and in David Rumsey's collection. It appears on the market from time to time.

Aaron Bohrod (November 21, 1907 – April 3, 1992) was an American social-realist painter and illustrator active in Chicago and Wisconsin in the middle to late 20th century. Bohrod was born in Chicago, the scion of a Bessarabian-Jewish immigrant grocer. He studied at the Art Institute of Chicago and then, from 1926 - 1930, at the Art Students League of New York. Returning to Chicago in 1930, he became fascinated with Americana, focusing on city scenes depicting the lives of the working class. His work earned considerable praise and commercial success, culminating in commissions by the Illinois division of the Treasury Department's 'Section of Fine Arts' (1934 - 1943), a New Deal organization similar to the WPA, to complete murals in Vandalia (1935), Galesburg (1938), and Clinton (1939). During World War II, Bohrod worked as an artist of the United States Army Corps of Engineers before moving to Europe to illustrate for Life magazine. After the war in 1948, he took a position at the University of Wisconsin-Madison, where he remained until 1973. During this time his style changed from Social-Realism to highly realistic trompe-l'oeil paintings, for which he became internationally renowned. Bohrod's cartographic work is limited to a single pictorial map issued in 1946 illustrating American History. He died of Cancer in Wisconsin in 1992.