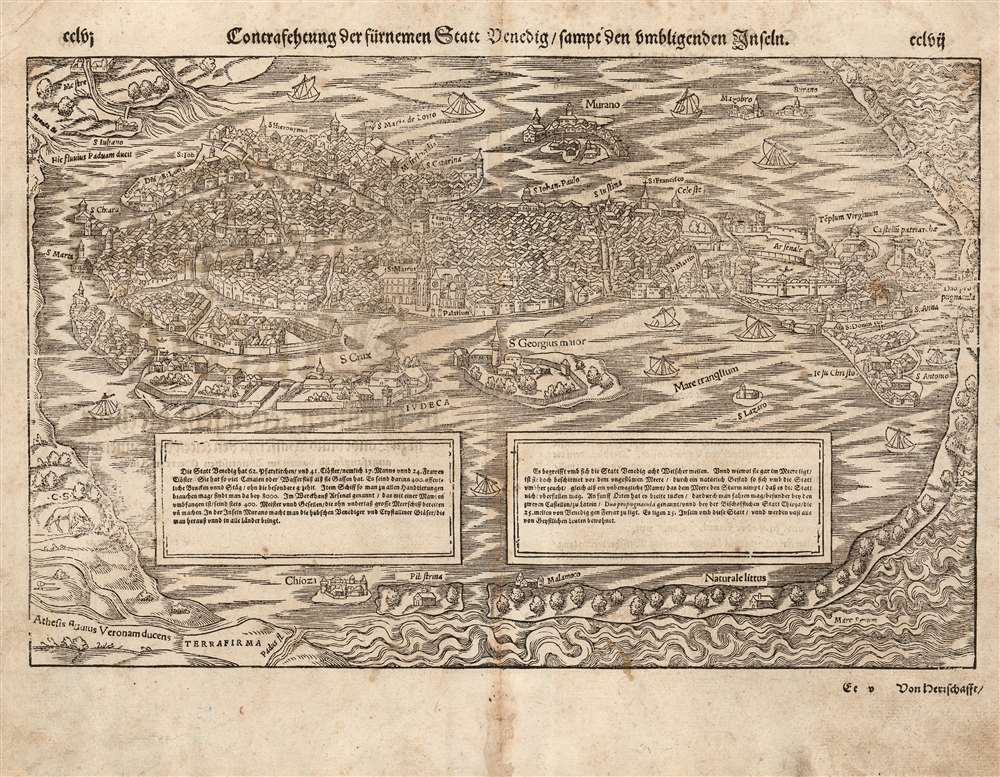 One of the Earliest Acquirable Views of Venice.
$900.00

This is Sebastian Munster's attractive, woodcut view of the city of Venice, one of the earliest generally acquirable. It displays the famous city, emphasizing the turbulent waters beyond the sand banks and the calm shallows in which the city lies protected. Many of the city's famous buildings and churches are labeled, including the iconic Piazza San Marco. Sail boats ply the waters.

This view does not appear in Munster's work prior to 1550. Munster himself constantly labored to build the work until his death by plague in 1552, both adding to the text as well as ordering the production of improved city views. 1550 saw the addition of many of these. Both this view of Venice, and the view of Rome appearing the same year, were the work of a woodcutter known only to us by his initials, 'C.S.' which sometimes appear in conjunction with a rendering of the tools of his trade (a knife and a chisel), and sometimes in alongside the initials of the woodcutter David Kandel. It is remotely possible that the woodcutter in question is Christoph Schweitzer who produced a very fine 1595 view of Durham, England, but so long an active career during this period beggars the imagination.

This map was cut by the woodcut artist known as 'the monogrammist C.S.,' probably Christoph Schweicker, for inclusion the 1550 edition of Cosmographia Universalis. Like most of the views and maps from the body text of the work, it was retained in 1588 even after the double-page foretext maps were replaced. This example of the map corresponds to the 1588 German edition of Cosmographey. The individual view appears in nine citations in OCLC, in varying editions.


Christoph Schweicker (fl. 1550) was a German-Swiss woodcut artist living and working in the Rhine region in the mid 16th century. He is probably both the so-called 'monogrammist CS' who produced many of the views for the 1550 edition of Sebastian Münster's Cosmographia; he is also probably 'the Master Christoph' who executed the Nicholaos Sophianos map of Greece in Basel, signing the work 'CHS.' These attributions cannot be conclusive, given the lack of biographical information generally available for the woodcut craftsmen of this period. Learn More...