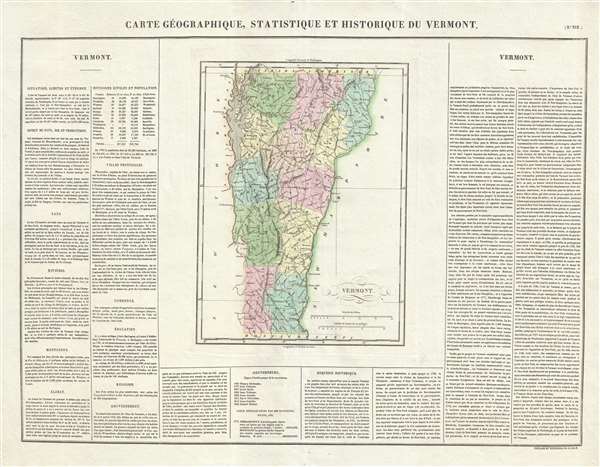 One of the first maps of Vermont published outside of the United States.
$175.00

This is an 1825 Jean Alexandre Buchon map of Vermont. The map depicts the state from Canada to Massachusetts and from New York to New Hampshire. Highly detailed, each township is labeled, along with several other cities. Counties are shaded different colors to allow for easy differentiation. Lake Champlain illustrated in detail, occupies most of the state's left border, while the Connecticut river forms the right border. An extensive text, in French, frames the map on three sides and discusses the state's climate, government, education, principal cities, trade, and history in some detail.

This map was published by Jean Alexandre Buchon in the 1825 French edition of Carey and Lea's American Atlas.

Jean Alexandre Buchon (May 21, 1791 - August 29, 1849) was a French scholar, historian, and politician. Born at Menetou-Salon, he followed his family to Paris in 1813 as his father had to flee the region. Finally, his father fled to California. This left Buchon the sole provider for his six brothers and sisters. A prolific publisher, he translated numerous works from English to French and also several of his own works. An ardent liberal, he took an active role during the Restoration and was named Inspector of Archives and Libraries in 1828. Thrown out of office in 1829 due to his political opinions, he returned to government life in 1840-41 when he was charged with a diplomatic mission to Greece. During the intervening years, Buchon published most of his writings. Buchon's most important contribution to geography was the publication of the French edition of Carey and Lea's American Atlas in 1825. A highly detailed text about the state or territory depicted and a map of the area were featured on each page of the atlas. The French edition of this atlas is generally considered to be of high quality when compared with other editions, as it has quality paper and superior engraving.