1862 Arnold Map of Washington D.C. during the Civil War 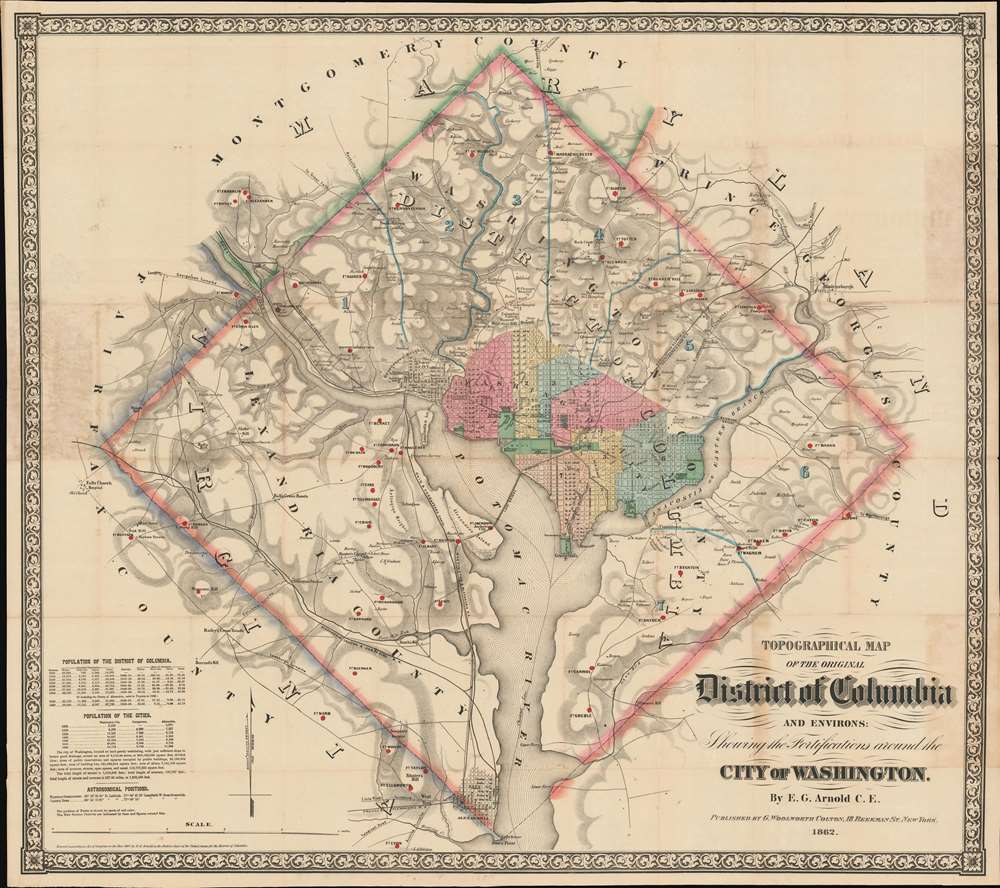 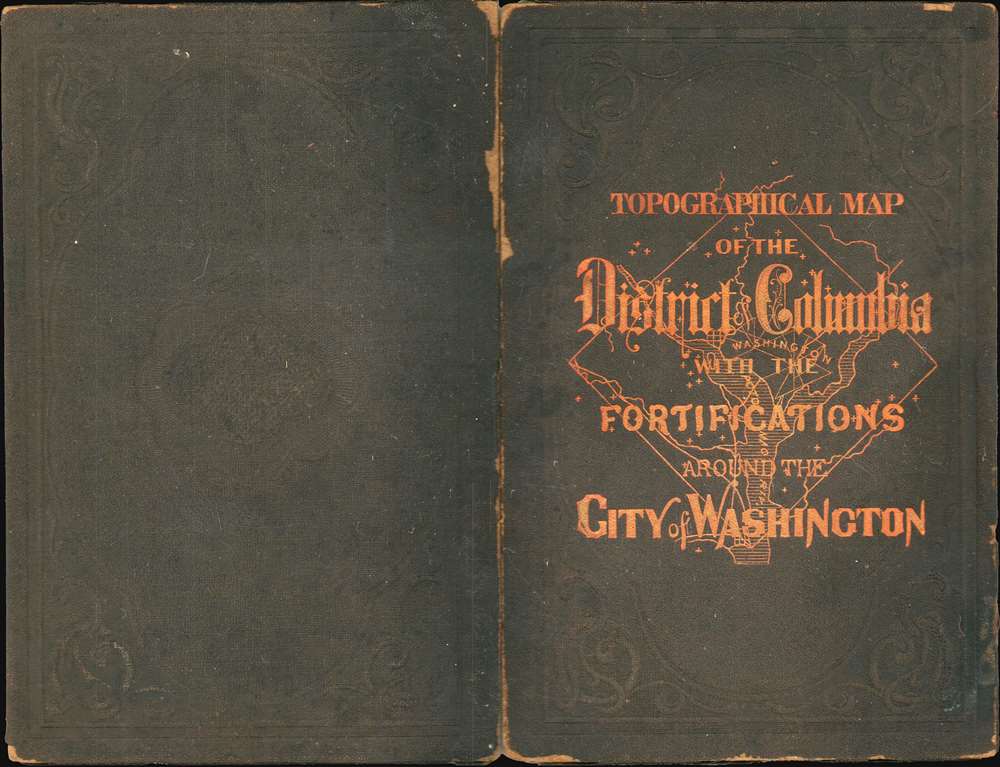 1862 Arnold Map of Washington D.C. during the Civil War

A most important Civil War map of Washington D.C.

Known as 'The Arnold Map', this is the most important Civil War era map of Washington D.C. and vicinity. This map was issued by Edward Greene 'Aloha Vivarttas' Arnold and G. W. Colton in 1862, just after the Second Battle of Bull Run. Centered on the White House, the map illustrates the 'original' ten-mile-square diamond-shaped land allocation set aside for the District of Columbia. As a cartographic piece, Arnold's map exceeded in quality all previous maps of the region, noting roads, canals, turnpikes, railroads, and mills, as well offering a meticulous presentation of topography. Significantly, it illustrates the 51 fortifications, army hospitals, and dozens of small batteries - all critical wartime reconnaissance.

In September of 1862, the map hit the shelves of Washington bookshops and immediately caught the attention of Secretary of War, Edwin Stanton. Reeling from a defeat days earlier at the Second Battle of Bull Run (Aug 29, 1862 - Aug 30, 1862), Stanton recognized the map as a strategic asset should it fall into Confederate hands, and consequently ordered all examples confiscated and destroyed. As noted in the Washington Post, Nov. 6, 1892,

…two days after the first copy had been put on sale, the rumor of its existence reached the ears of the War Department, and the officers of the law swooped down on the bookstores and gobbled every copy in stock…. Not only were all the bookstore copies taken, but the name [sic] of those who had bought copies of the map were also learned, and those individuals were promptly called upon and given the alternative of surrendering their purchase or of going to the Old Capitol, which was then the political prison of the city. The plate from which the map had been printed was confiscated as well…

The War Department also confiscated the copper plate in New York from which the map was printed. In compensation, Arnold received $8,000 for his loss by the U.S. government.

Stanton's censorship of the Arnold Map no doubt accounts for its extreme rarity today.

Washington D.C. during the Civil War

Although designated as the national capital, Washington D.C., set on swampy terrain, did not immediately catch on as a place to live or do business. In 1862, when this map was issued, the city hosted only about 60,000 inhabitants (compare to New York at 1,200,000 or Philadelphia at 600,000). When the American Civil War (1861 -1865) broke out, D.C. was at the southernmost limit of Union control, within a day's ride on horseback form the Confederate capital at Richmond. The city promptly became home to thousands of Union troops and support personnel, as well as an ever-growing bureaucracy. It served as a staging area for campaigns in the Potomac Theater as well as the site of numerous field hospitals and relief centers. Just days before this map was issued, the Second Battle of Bull Run (Aug 29, 1862 - Aug 30, 1862), fought just west of Washington, handed Union forces a resounding and devastating defeat.

Arnold and His Sources

The author of this map, Edward Greene Arnold, had relocated with his large family to Washington D.C. around 1860, before the war - doubtless hoping to capitalize as architect and civil engineer on the development of the new city. Quoting Goode once again,

Arnold reproduced the original 10-mile square laid out by Peter L'Enfant and surveyed by Andrew Ellicott in 1792. Arnold based his map on Boschke's map of 1861, but also included the city of Alexandria, which had been ceded back to Virginia in 1846. The seven wards within D.C. are color coded, and he showed all railroad lines and regional roads entering the city. In a chart at the lower left, Arnold listed the populations of Washington, Georgetown, and Alexandria by decade from 1800 - 1860. He also broke down the population by race into 'white,' 'free colored,' and 'slave.' To Union military authorities, the Arnold Map was important for three reasons: it showed the topography of the area, all the roads leading into the city, and the location of the then 51 forts protecting the city.

It is curious that Arnold chose to illustrate the full 1790 ten-mile-square diamond-shaped cession, as Alexandria County (that land west of the Potomac River) was retroceded to Virginia in 1847. It may be that Arnold wanted to claim more Union territory at the expense of Virginia, a Confederate state. It may also be that Arnold, a dedicated Freemason and later a practicing Theosophist, found beauty and harmony in the original diamond-shaped allocation.

This map drawn by Edward Greene 'Aloha Vivarttas' Arnold and published by George Woolworth Colton (1827 - 1901), elder son of Joseph Hutchins Colton (1800 - 1893). It was issued in September of 1862 and was advertised for sale in Washington D.C. by at least September 10. The copper plate was subsequently destroyed by the War Department and all obtainable examples either confiscated or destroyed. There is, thus, only 1 edition. The map was reproduced in 1902 by Capitol Curio Co. for twenty-sixth annual encampment of the Grand Army of the Republic at Washington. While the 1902 Capitol Curio reproduction does appear on the market from time to time, the original 1862 edition, as here, is for all intent and purposes an otherwise unobtainable map. We have identified just 3 examples sold privately in the last 30 years. Institutional holdings are limited to the Library of Congress, Harvard, and a 60% destroyed example at the New York Public Library.

Edward Greene 'Aloha Vivarttas' Arnold (September 24, 1834 - August 31, 1898) was an American marine architect, civil engineer, and inventor active in Washington D.C. and New York in the middle part of the 19th century. Arnold was born in Providence, Rhode Island, the son of Aza Arnold (1788 - 1865) and Abigail Dennis (1794 - 1877). His family was old and prestigious, having come to the United States in 1663 and settling in East Greenwich, Rhode Island. He studied architecture and engineering. Sometime in the late 1850s, the entire Arnold family, including Asa, moved to Washington D.C. to participate in the building of the new capital. In 1860, he is recorded in both the New York and the Washington D.C. Federal Censuses. In 1861 he produced, in partnership with the Colton firm, an important map of Washington D.C. After the Civil War he relocated to New York City, where he lived until 1880, when he moved to Hoboken. In New York, he successfully established himself as an architect and inventor, filing multiple patents. Sometime after the Civil War, likely in the late 1870s, Edward bizarrely changed his name to 'Aloha Vivarttas', with his wife and children also adopting the 'Vivarttas' name. Vivartta is a Hindu term from Vedic tradition meaning the 'essential material of a thing.' The unusual choice suggests that the Arnold family was associated with the Theosophical Society, a quasi-religious esoteric order rooted in mysticism tenuously connected to Hindu and Buddhist scripture. The Theosophical Society was established in New York in 1874 gaining an immediate following - roughly aligning with the name change. From this point on, 'Aloha Vivarttas' is the given name for census records and other official documentation, such as patent applications, of which he had many. He also named his children 'Vivarttas', abandoning 'Arnold' altogether. Arnold / Viarttas died in Weehawken. His son Percie A. Vivarttas (Arnold), was also a prominent architect. Learn More...