1846 Bradford Map of the West Indies 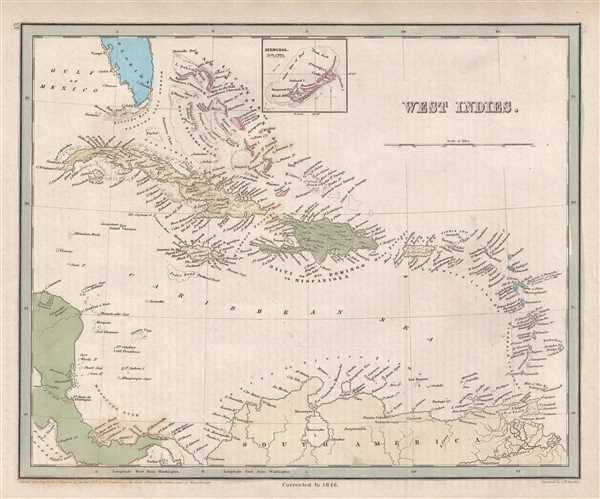 1846 Bradford Map of the West Indies

A beautiful map of the Caribbean illustrating all the islands.

This is an 1846 Thomas G. Bradford map of the West Indies. The map depicts the region from the Gulf of Mexico and Honduras to Barbados and the Atlantic Ocean and from Florida and the Bahamas to Colombia and Venezuela. Highly detailed, each island in both the Greater and Lesser Antilles is labeled, along with cities, towns, and villages on nearly all the islands. Coastal locations are labeled on Cuba, Hispaniola, Jamaica, and Puerto Rico. An inset map of Bermuda is situated along the top border.

Slavery was still legal in the Caribbean in at this point in history, just as it was in the United States. In fact, even in 1846, the French were still importing slaves into their Caribbean colonies. Numerous slave uprisings occurred throughout the region, with the last taking place on Cuba only three years prior to the publication of this map, in 1843. Most islands in the Caribbean were still occupied by European colonial powers as well, with Haiti being the first to gain independence from European powers in 1804. Some Caribbean islands are still administered by European countries or the United States, while those that gained independence had to wait until the mid-20th century, or later.