1769 Tirion Map of the West Indies 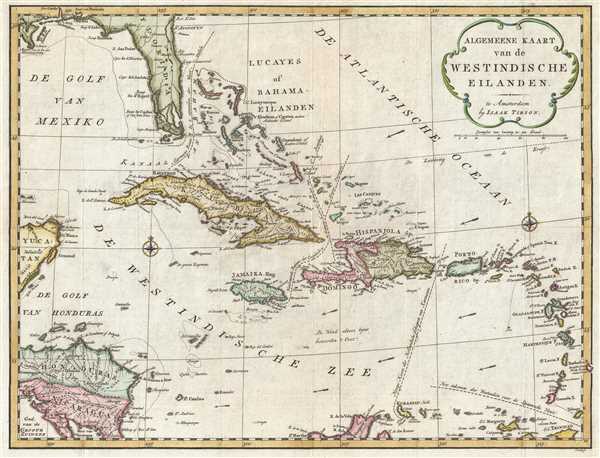 1769 Tirion Map of the West Indies

This is a 1769 Isaak Tirion map of the West Indies. The map depicts the region from the Yucatan Peninsula and Honduras and Nicaragua to the Lesser Antilles and from Florida to the extreme northern portion of South America.

Perhaps the most intriguing aspect of this map is the inclusion of numerous trade routes around the Caribbean. Piracy was a common practice in the Caribbean during the 18th century, and by including common trade routes, cartographers could create another clientele for their work. Numerous cartographers, notably Herman Moll, who employed this practice on several different maps, included these notations in the work. The most common route noted by these cartographers, and Moll in particular, was that of the Spanish fleet. However, the common route of the Spanish fleet is not the only shipping route noted here, each of which are illustrated using dashed lines. Tirion notes and labels the traditional entrance of the Spanish fleet into the Caribbean between Grenada and Trinidad, in the lower right corner. The Dutch route to Curaçao threading between Hispaniola and Puerto Rico is included, along with the English route to Jamaica and the French passage to Hispaniola / Santo Domingo. The 'most common route in the West Indies', which was used by at least the Spanish fleet and probably others, is labeled as such and illustrated in the Florida Strait between the Bahamas and Florida.

Highly detailed, numerous locations throughout the Caribbean Sea are labeled. Nearly all of the islands, including Cuba, Hispaniola, Puerto Rico, the Bahamas, the Virgin Islands, Martinique, Guadeloupe, Antigua, Barbuda, St. Lucia, and Curacao, are illustrated and labeled, along with numerous others, such as Cozumel. Locations along the coastlines of most of the islands are labeled as well, including Cape Canaveral, the modern-day home of the Kennedy Space Center. Reefs and other hazards are also noted.

This map was created by Isaak Tirion and published n 1769.