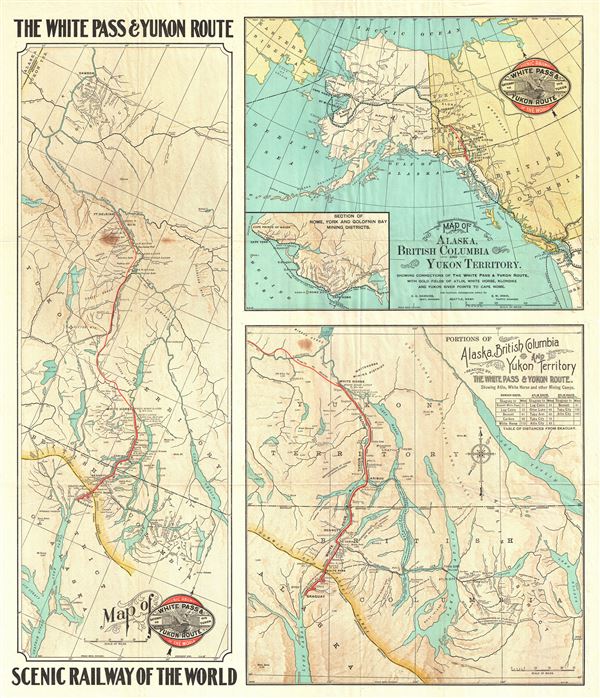 A scarce 1919 Klondike Gold Rush map illustrating the just completed White Pass and Yukon Railway. Covering portions of Alaska, British Columbia, and Yukon Territories, this is essentially three maps on a single sheet. The leftmost map focuses on the White Pass and Yukon railway route between the Alaskan port of Skaguay (Skagway) and the Yukon city of Fr. Selkirk. This map is surprisingly detailed noting everything from the depths of various rivers, to known gold strikes and overland trails. It also identifies rapids, canyons, mountains, rivers and streams, and the 'Probable International Boundary.' A secondary map in the lower right quadrant, entitled Portions of Alaska, British Columbia and Yukon Territory reached by the White Pass and Yukon Route, offers an even more detailed focus on those southern reaches of the railway between Skagway and the White Horse, with a special focus on access routes to the Atlin, White Horse, Bighorn, and Tagish mining districts. The third map, in the upper right quadrant, entitled Map of Alaska, British Columbia and Yukon Territory details an extension of the railway along the Yukon River to the Alaskan cities of Cape York and Nome. The inclusion of this map on the sheet suggests the railroad was being promoted as an access route for prospectors beyond the Kondike, in the Alaskan Nome and the Golofnin Bay mining districts.

The White Pass and Yukon Railway was completed between 1898 and 1900 with the intention of capitalizing on easy access to the remote Klondike Gold Fields. Even at the time it was known as an exceptionally scenic route, passing through high mountains, past deep canyons, and dramatic rivers. Today it operates as a heritage railway. A reporter writing for the Victoria Colonist on December 2 of 1900, had this to say.

It is no disparagement to other mountain railways to say that the construction of the White Pass and Yukon is among the most brilliant feats of railway engineering in view of the tremendous difficulties to be encounters and the shortness of time in which the work was done.

Upon its completion the White Pass and Yukon railway hired Poole Brothers of Chicago to illustrate the route with a promotional map focused on gold seekers.