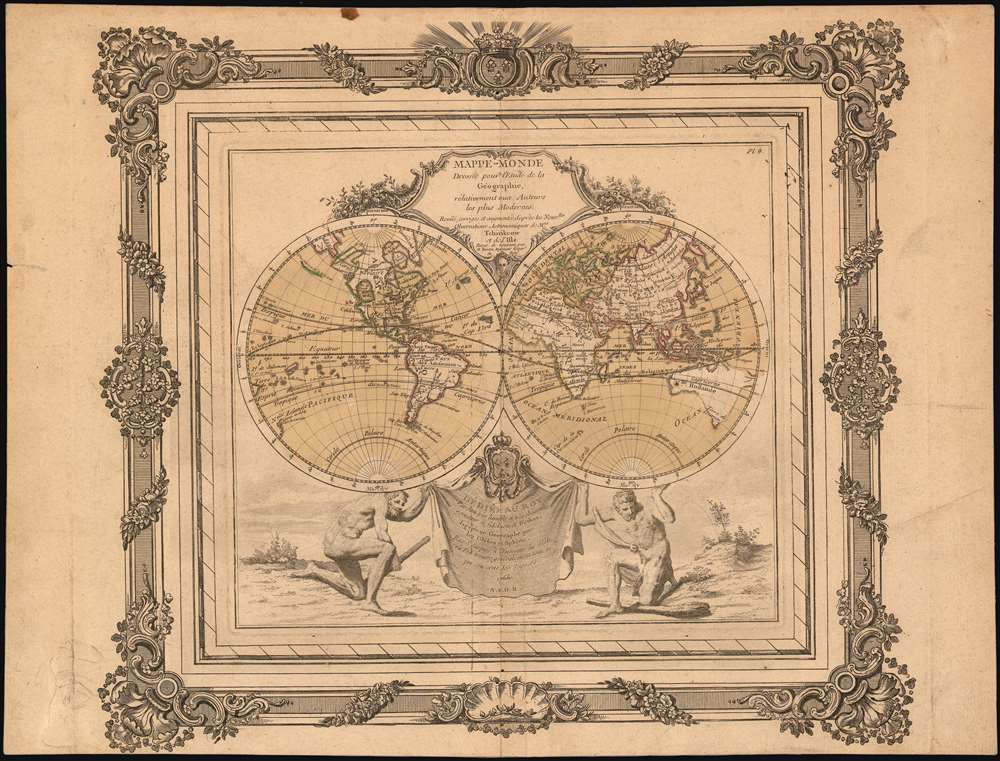 An attractive example, with delicately-applied old wash and outline color, of this fascinating map of the world. The map is executed in two hemispheres, each suspended by a titan, one of which is presumably Atlas. Superbly engraved cartocuhes embellish the cusps of the hemispheres. Boasting the state-of-the-art astronomical observations of both Chirikof and Delisle, the map reveals a conjectural Northwest Passage and a massive Sea of the West dominating the northwest part of North America. Australia (Nouvelle Holland on this map) and New Zealand appear in their pre-Cook delineation, with indistinct eastern coastlines. It was engraved using two separate copperplates: one for the map itself, and another for the decorative rococo border. (this allowed for different borders to be employed in later editions of the atlas.)

Printed maps showing in the Pacific northwest a massive and utterly fraudulent body of water generally referred to as the Sea of the West appear on many maps, overwhelmingly French, of the second part of the 18th century. The earliest was probably Jean-Baptiste Nolin’s 1742L’Amerique ou le Nouveau Continent; Nolin appears to have copied the relevant cartography from an unpublished manuscript globe by the great mapmaker, Guillaume De l’Isle. The notion did not truly take hold until its vigorous support, starting in 1752, in the maps of J. N. De l’Isle and Philip Buache, who generally presented the monumental bay in conjunction with a viable Northwest Passage. Though De l’Isle and Buache were immediately accused of fraud with regard to this geographical feature, the Sea of the West appeared on many maps – some editions even post-dating Cook.