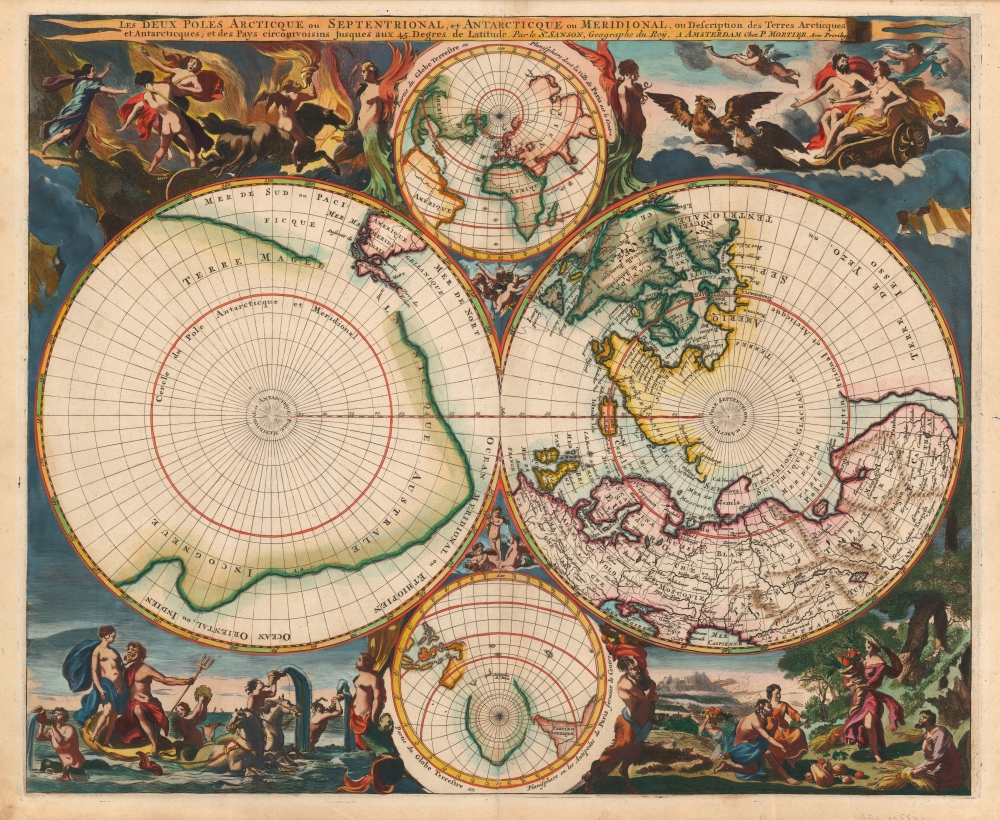 This is a beautiful example of Peter Mortier's 1696 double-hemisphere map of the north and south poles. The primary hemispheres focus on the northern and southern thirds of the world. The secondary hemispheres show the entire world, centered respectively on Paris and its antipodes.

The geographical content of the primary hemispheres is drawn from the 1657 map of Nicolas Sanson (whose title is shared by the present work.) These do not constitute a world map per se. The polar projections end at 45º south and north respectively. The southern polar projection on the right is dominated by a massive southern continent, marked Terre Magellanique Australe et Incogneue (the southern and unknown land of Magellanica.)

The northern hemisphere shows Europe north of central France and the Black Sea, Asia north of the Caspian Sea and Turkestan, and Spitzbergen and Nova Zemla are shown as partial coastlines. North America shows the Great Lakes in their unfinished, 'Sanson-type' form. The northern part of North America is shown including the Saint Lawrence River, Newfoundland, and the Canadian Maritimes. Hudson's Bay, Button's Bay, Baffin's Bay, and the Davis Strait are all shown, with numerous openings in the coastline suggesting the possibility of a Northwest Passage. Greenland is shown as a landmass contiguous with North America, and nearly connecting with Spitzbergen. Additionally, the North American landmass reaches westward to include the speculative Terre de Yezo, ou Iesso, which contemporaneous cartographers presented as beginning as the island of Hokkaido.

The two ancillary hemispheres at top and bottom, focusing on Paris and its antipodes, did not appear on the 1657 Sanson. The 1658 Visscher (from which the decorative engraving was sourced) did have ancillary hemispheres but their contents differed. (The Visscher map's smaller hemispheres were polar projections extending to the 50th degree of latitude.) We do not see a precise precursor to these hemispheres, although Mortier also included them in his Mappe-Monde Dressé sur les Observations de Mrs. De L'Academie Royale des Sciences, published the same year as the present work. While the geography of these projections does not match up precisely with that of the primary hemispheres - for example, they lack the massive Terre de Yezo - they do provide a global context for the main maps that might be lacking (given the absence of anything between the 45th parallels). The ancillary southern hemisphere also includes a rendition of Tasman's coastlines for Australia, Tasmania and New Zealand - albeit oddly close to the imaginary Magellanica.

The decorative elements - up to and including the framing of the secondary hemispheres, and the cartouche banner - are copied from Nicolas Visscher's 1658 Orbis Terrarum Nova et Accuratissima Tabula. Visscher's artist - the Dutch painter Nicolaes Berchem - created nuanced, layered allegorical scenes representing each of the four elements in the map's four corners. The scene for 'Air' shows Zeus and Hera in a chariot pulled by eagles, with putti flying in attendance. For 'Earth', in a woodland scene, Demeter gifts a hungry mankind the fruits of the Earth, in an overflowing cornucopia. The scene representing 'Fire' takes place in the underworld, showing the abduction of Persephone by Hades. In the aquatic scene, Poseidon woos Aphrodite in a hippocampus-drawn chariot, with mer-putti bugling wetly from conches and playing tambourines.

The top ancillary hemisphere is flanked by angelic figures, while the bottom is flanked by a mermaid (facing the water scene) and a satyr facing the Earth vignette. The cruxes of the four hemispheres are each peopled with a trio of putti.

The map was engraved in 1696 for inclusion in Mortier's Atlas Nouveau. A further state, bearing the Covens and Mortier imprint, was printed in and around 1730 (Kershaw #146 dates this 1761, and names it a third state, although he does not mention the present 1696 Pierre Mortier state.) The present first state appears to be rare, and we see only a single example catalogued in OCLC appearing in the Bayerische Staatsbibliothek.