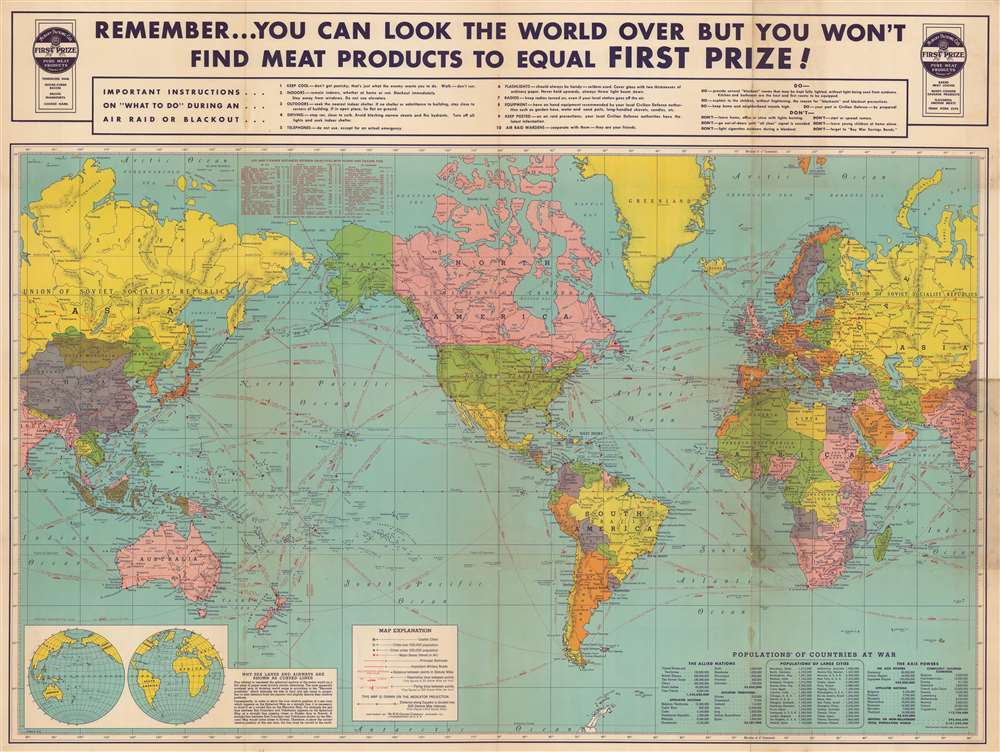 A rare and fascinating 1942 H. M. Gousha Company map of the world created as a promotional piece for Albany Packing Company's First Prize pure meat products during World War II. While the American people were never subjected to constant enemy bombing raids, advice for what to do (and not to do) during an air raid is prominently printed just below the title. These include keeping calm, no using telephones, not driving, and following proper blackout protocol.

Global sea and air routes are traced using red dashed. Travel times by air and by sea are also provided, rendering it apparent just how much air travel had changed the world in only a few decades. A text box along the bottom border explains why these routes are curved and employs spherical Earth maps to clarify.

Two political boundaries in Europe indicate that this piece was published in mid-1942 at the height of World War II. One is the deletion of an independent Austria and its inclusion within the boundaries of Germany and the other is a divided France, with the Occupied Zone shaded purple and the Unoccupied Zone green. Intriguingly, the green color scheme is used to shade all of France's colonies in Africa and Southeast Asia, some of which were no longer allied with Vichy but rather with Charles de Gaulle's Free French Forces. The inclusion of Japan's puppet state of Manchukuo in Manchuria also refers to the events of the world war. The more blatant war references are situated along the bottom border, where tables list the 'Axis Powers' and Allied Nations'.

This map was created by the H.M. Gousha Company and published as a promotional piece for the Albany Packing Company's First Prize pure meat products. Gousha produced editions of this map for other companies as well. An example published for Arpeako Meat Products is part of 'Persuasive Maps: P.J. Mode Collection' at Cornell University. The present example, and the edition produced for Arpeako that is part of the P.J. Mode Collection, are the only known examples.

H.M. Gousha Company (1926 - 1961) was one of the major publishers of road maps and atlases during the mid-20th century. Founded in Chicago 1926 by former Rand McNally sales executive Harry Mathais Gousha, Gousha quickly became a competitor of Rand McNally thanks to its Touraide, a spiral-bound book with road maps, points of interest, and accommodations that was custom assembled for each client. Gousha moved its headquarters to San Jose, California in 1947. In 1961, the firm was acquired by the Times Mirror Company, and then by Simon and Schuster in 1987. What remained of Gousha was finally acquired by Rand McNally in 1996, and subsequently much of the company's archives were donated to the Newberry Library. Learn More...

Persuasive Maps: PJ Mode Collection, 1311.01
Looking for a high-resolution scan of this?