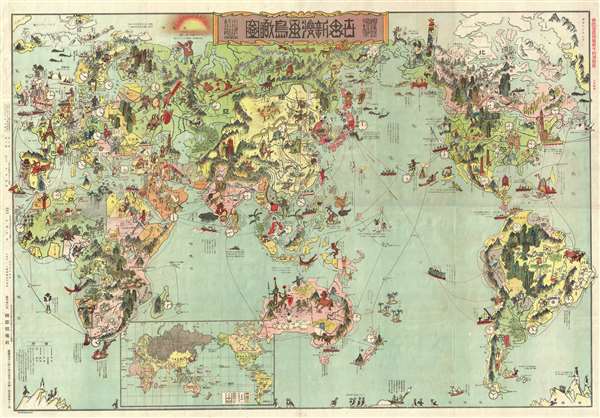 This is a rare Taisho 13 or 1924 Japanese manga or cartoon map of the world by artist Maekawa Senpan and Ogawa Jihei. The map was published by Toshiaki Ishihara (石原俊明) and the International Information Company (國際情報社). Centered on Japan, the map covers most of the known work with the exception of the Atlantic. Cartoon figures illustrate geography, culture, historical events, flora, fauna, and more.

Generally predating the greater hostilities of World War II, this map exhibits a fairly friendly and open-minded world view, at least towards most parts of the world. Scotland is described as 'beautiful and similar to Japan.' France is a land of wine, art, and fashion. The United States is a place of rich agriculture, shingling skyscrapers, scenic beauty, and sports, including tennis, boxing, and baseball. In the Amazon there is a great anaconda snaking about the river itself. Canada is mostly forests and lumberjacks.

There are a few political references, particularly in China, where north and south China are shows in a tug of war battle, reference to infighting between regional warlords. The map also references the Japanese population in Hawaii. In addition, there are historical notes throughout, identifying the landing place of Christopher Columbus, St. Helena where Napoleon was exiled, and more.

The more negative aspects of the map include its illustration of Russia, with a chained slave populace, military aggression, and a rabid tiger bearing a bloody sabre north of Manchuria. Taiwan, then part of the Japanese Empire, is illustrated by a spear-wielding savage, clearly a reference to the aboriginal peoples of eastern Taiwan with whom Japan had an incident in the 1880s. It also references the Armenian genocide. Germany is gloomily represented by a skull sitting on a pile of books.

In 1932 Shishido Sakō (宍戸左 行) redrew this map with a darker more militant message. On that map, the United States, is no longer the land of fun and sports, instead bloated politicians and capitalists sit in New York and Washington, racist imagery appears in the south, and in Chicago's criminal bootleggers are in cages. Political figures like Stalin, Hitler, Franco and Mussolini make appearances. In that later edition, the pleasure craft, merchant ships, and fishermen on this map, are replaced with battleships.


Maekawa Senpan (前川千帆, October 5, 1888-1960) was a Japanese printmaker, artist, and cartoonist active in the first half of the 20th century. Maekawa was born in Kyoto, the younger brother of print-artist, Asaga Manjiro (1885-1965). From about 1905 he studied with Asai Chu (1856-1907) at the Kansai Bijutsuin (Kansai Fine Art Academy). In 1911 he relocated to Tokyo, taking work as a charicaturist and cartoonist for the Yomiuri Shinbun, the Kokumin Shinbun, and for Tokyo Pakku (Tokyo Puck). While in Tokyo, he thought himself woodblock printing and was a member of the Japanese Print Association from 1931 – 1960. During World War II, he was active with the Nihon Manga Hōkō Kai, a government sponsored cartoonists society organized to support the war effort. He was a staunch traditionalist while at the same time a political radical. Artistically, Maekawa was connected to the Sōsaku-hanga (創作版画) movement. Following the war his work became popular with the occupying forces and was repressed in several international exhibits, earning him global recognition. Learn More...


Toshiaki Ishihara (石原俊明, January 21, 1888 – January 17, 1973) was a Japanese businessman, publisher, and newspaperman active in the early to middle 20th century. For a time was a monk of Zen Buddhism. Toshiaki was born in Kakogawa City, Shizuoka, Japan. During the pre-war period he published various scientific journals. In 1922 he founded the International Information Agency (國際情報) , which published until 2002. After World War II, in 1851 he restructured the International Information Company. In, 1966 he launched the Taiwanese Company Limited Company and in 1969, Ishihara Shokai Kaikai. He died of heart failure in January of 1973. Learn More...