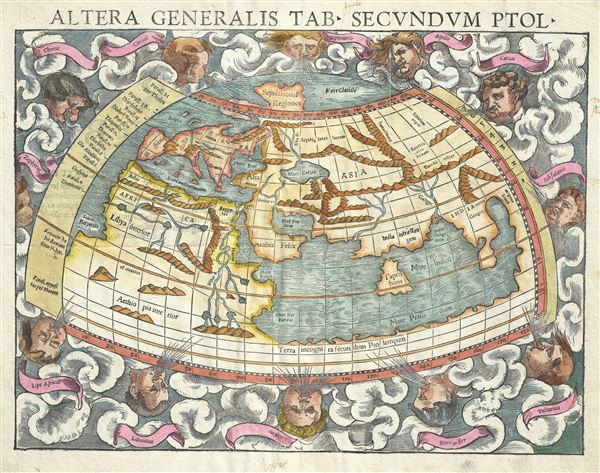 Munster, S., Cosmographica, (Basel) 1550.     The Cosmographia Universalis, one of the greatest geographical and historical works of the 16th century, 'taught nearly three generations of laymen most of what they knew about the world beyond their native places' (Strauss). Filled with maps, views, and rich descriptions of places throughout Europe and beyond, it was the best general source of geographical information until the advent of Ortelius' Theatrum. It was first issued by Sebastian Munster (1488 - 1552) in its 1544 German edition, and stayed in print long after its author's death in thirty five editions, and in five languages. (Of these, the 1550 and 1552 editions are widely regarded as the most complete and truest to the author's intentions: thereafter, later editors continued to add to the work's text; editions from 1588 onwards employed an entirely different set of maps produced on Ortelius' model.) Munster's goal, initially, was to rally his homeland's humanists and scholars to produce a new map of Germany in order to 'see what kind of a land our ancestors conquered for their home... bring honor to our country and place its beauties in the clear light of day.' Munster's project quickly expanded to cover the known world in its scope to produce a 'sufficiently large volume, in which I touch upon the foundation of all nations and kingdoms, their peculiarities, rivers, mountains, customs of men, royal successions, origins of the more important cities, succinct histories, religions, characteristics and fertility of lands... in Germany, however, I tarry a little longer.'.