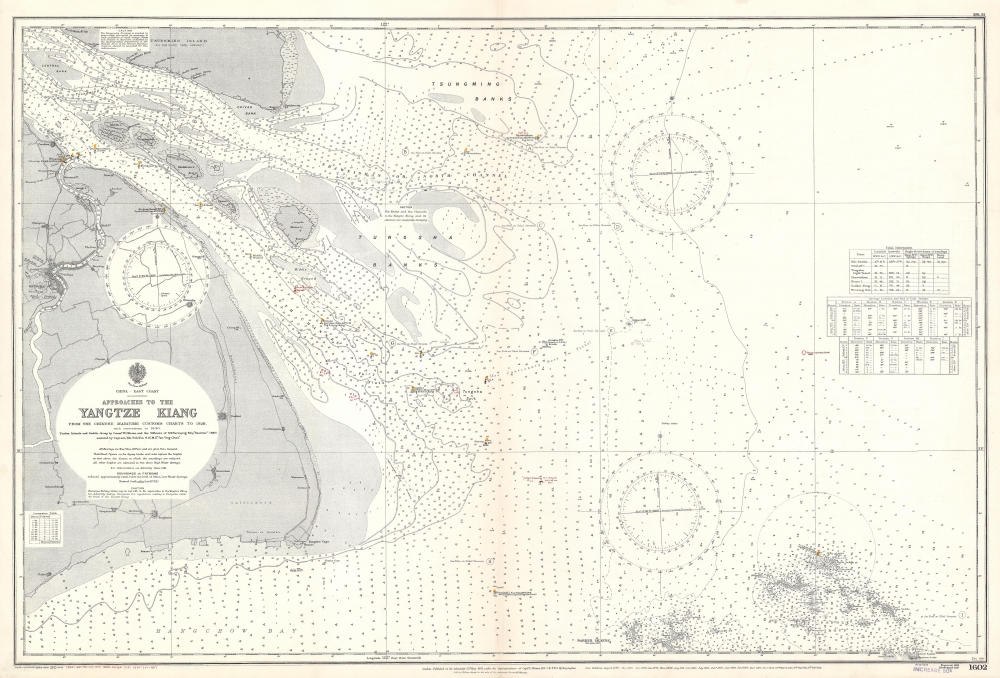 A nautical chart of the approaches to Shanghai through the Yangtze River.
$1,800.00

This is a 1931 Admiralty nautical chart or maritime map of the approaches to the mouth of the Yangtze River in China. The map depicts the region from Shanghai to the China Sea and from Tsungming (Chongming) Island to Hangchow (Hangzhou) Bay, the Parker Islands, and the Saddle Group. Highly detailed, myriad depth soundings (measured in fathoms) are indicated throughout. Coastal locations, islands, banks, and channels are all identified. Shanghai is situated along the left border, with some locations, including the British consulate, labeled. Depth soundings are also provided up the Whangpoo (Huangpo) River even past Shanghai.

Numerous manuscript notations are noted here, all of which have been added in red ink. These additions have been traced in the same fashion that the Admiralty traced small corrections to the map, by dating them in the lower left corner. By following this record, these notations date from 1932, 1933, and 1935. One of these notations is a new light. A handful of pencil notations are present as well. It is unclear if the yellow dots marking the the lights along the approach to the Huangpo River were done by the same hand.

This map was published by the Admiralty in February 1931, with the first edition issued in 1881 and several editions in between. This is a very scarce chart. A record for the 1881 edition appears in the OCLC, noting a single example in the British Library, but no other records appear for any of the other editions.