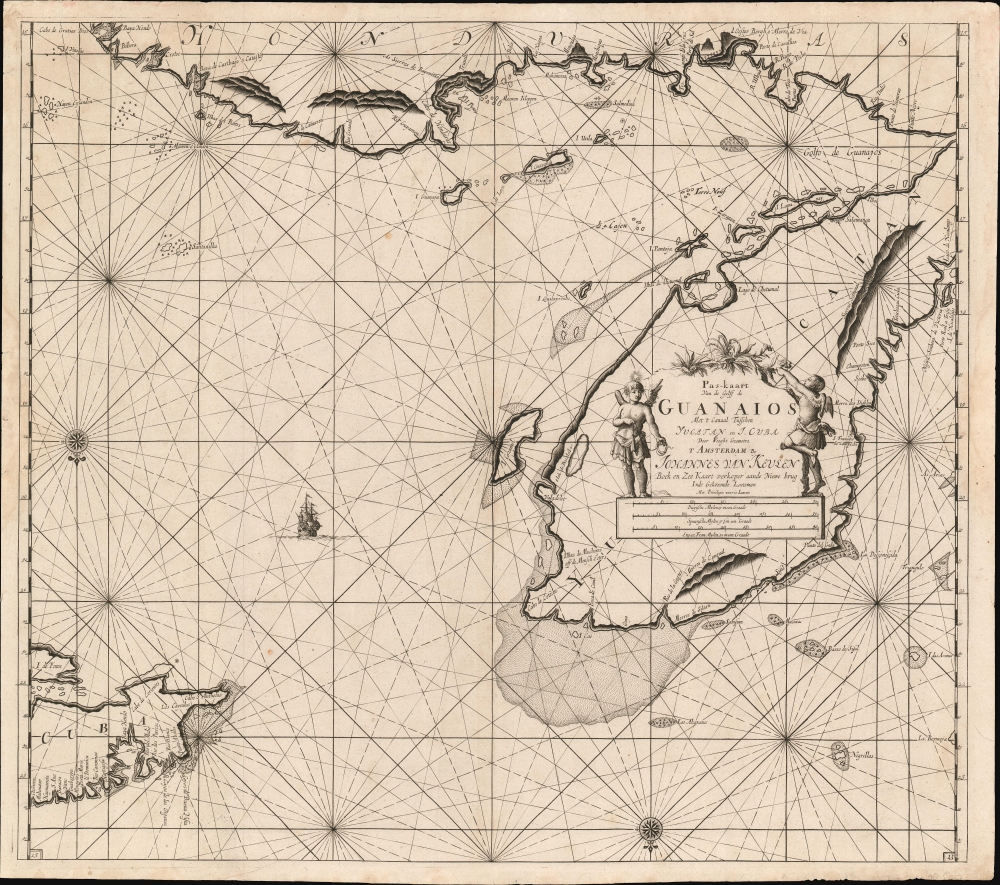 A boldly engraved 1684 nautical chart or maritime map of the coasts of Honduras, Belize, Mexico and Cuba: it is one of the first, if not the first printed chart to focus on the Yucatan Peninsula.

This southern-oriented chart shows the essential shipping lanes passing landward of Cuba. Place names appear in Spanish, indicating that Van Keulen's sources for his map were Spanish in origin. Cape Camaron and Cape Honduras are marked, which is broadly named 'Honduras' (at the expense of Guatemala, whose claim to the coast does not appear here.) The coastal islands of Guanaja and Utila are named; the island later known as Ruatan is here named Guayana. East of the Yucatan Peninsula, the island of Cozumel, with surrounding shallows, is apparent. Several of the islands along the coast of Mexico and Belize are named. Quintana Roo appears as the island of Quitaxvenho; the Islands and Bay of Chetumal appear more recognizably. Other place names - Isla Pantoja, Isla Zaratan - have disappeared in modern cartography.

Despite the vagaries of 17th century toponymy, Van Keulen included much intended to be useful. Throughout the chart, shallows and rocky areas are noted: important coastal approaches are accompanied with simple coastal views. The chart is decorative as well, with an attractively rendered ship, two compass roses, rhumb lines and a beautifully engraved cartouche with two putti. One clambers up the cartouche to pick a flower. The other, crowned with a star, and coiling a plumb line, likely is a representation of the navigator's art, or possibly the North Star itself.

Although they are not dated, Van Keulen's charts can generally be assigned publication dates based on typographical changes. First states of the charts from the fourth volume of Keulen's Zee-Fakkel lack page numbers; these are dated 1684. Second states, dated 1687, have a page number added to the lower left corner. The 1695 third state has page numbers in both lower corners - our example corresponds with this state. OCLC only reveals two copies of this map in institutional collections. Several examples of the chart have appeared at auction and in dealer's catalogues over the past ten years.

OCLC 431575162. Koeman, C., Atlantes Neerlandici. Bibliography of Terrestrial, Maritime and Celestial Atlases and Pilot Books, Published in the Netherlands up to 1880, vol IV, pp. 276-401.
Looking for a high-resolution scan of this?