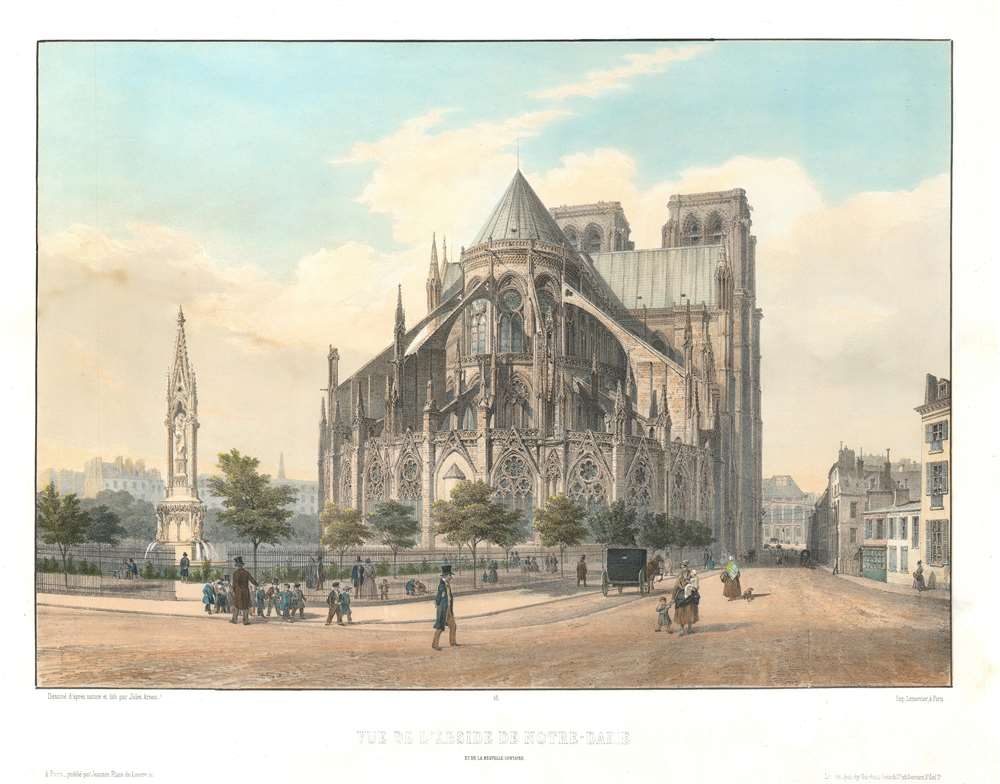 A view of Notre Dame before its 19th century restoration project undertaken by French architect Eugène Emmanuel Viollet-le-Duc and the construction of its iconic spire.
$500.00

This is a c. 1845 Jules Arnout view of the apse and east end of Notre Dame Cathedral in Paris, France. Notre Dame dominates the view, with its flying buttresses and the beautiful stained-glass windows of the apse, notably without its iconic spire (which had not yet been built). The Square Jean XXIII and the brand-new Fontaine de la Vierge (Fountain of the Virgin) are situated in the foreground, with several groups of children playing the park (the first of its kind in the neighborhood) and gentlemen in top hats wandering the streets and through the garden. Notre Dame's transept is illustrated, and the tops of its iconic towers are visible just over the transept's roof.

Eugène Emmanuel Viollet-le-Duc and the restoration of Notre Dame

As this view was created c. 1845, it was executed shortly before the French architect Eugène Emmanuel Viollet-le-Duc began that same year. Viollet-le-Duc's project would last for nearly twenty years and in the end wiped away damage done by revolutionary mobs and six centuries of existence. The most visually impactful aspect of this project was the reconstruction of Notre Dame's spire, which had been removed in 1786 because it had been unstable. Viollet-le-Duc meticulously sketched and photographed the cathedral's decorative elements, including its statues of gargoyles, saints, and chimeras so craftsmen could recreate them in a workshop he started for the project. Viollet-le-Duc's spire, although controversial at the time, became a fixture of the Parisian skyline and has been sorely missed since its destruction in the April 15, 2019 Notre Dame fire

This view was drawn by Jules Arnout 'd'après nature', which implies that he sketched the view while sitting behind Notre Dame herself, printed by the Lemercier firm, and published by Henri Jeannin c. 1845. We are aware of only one example in institutional collections, which is part of the collection at the Musée Carnavalet in Paris, and is in black and white.

Very good. Light soiling. Blank on verso.
Looking for a high-resolution scan of this?