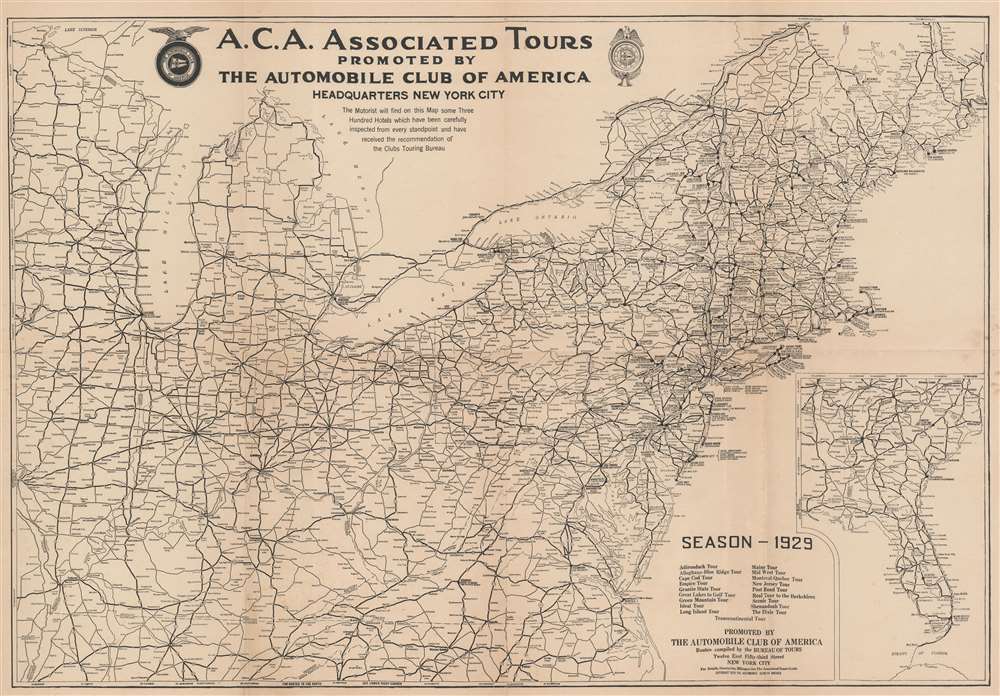 Travel the Northeast and stay at great hotels.
$250.00

This is a 1929 Automobile Club of America road map of the northeastern United States. Depicting from Illinois to the Atlantic Ocean and from Quebec, Canada, to Raleigh, North Carolina, prominent black lines trace highways and other routes recommended by the Automobile Club of America. Potentially these routes correspond with the tours promoted by the A.C.A.. Bold labels identify major cities and offer hotel recommendations. Per the map 'The Motorist will find on this map some Three Hundred Hotels which have been carefully inspected from every standpoint and have received the recommendation of the Clubs Touring Bureau.' Numerous other highways are illustrated, with cities and towns identified throughout. An inset in the lower right depicts from Nashville and Raleigh south to Key West in much the same fashion. A list of tours promoted by the A.C.A. appears to the left of this inset.

This map was created for and published by the Automobile Club of America in 1929. This is the only known cataloged example of the 1929 edition of this map. We are aware of one example of the 1928 edition in private hands.

The Automobile Club of America (fl. 1899 - ??) was originally founded by 25 men on June 7, 1899 at the Waldorf-Astoria Hotel in New York City. The ACA was the "pioneering club on motoring" and was also responsible for leading the Good Roads Movement, an effort to improve dangerous road and street conditions throughout the United States. The group was driven by not only a love for the fledgling automobile industry, but a desire to see it grow and expand beyond what others imagined. The ACA felt a large and influential body was needed to ensure the success and continued growth of the automobile community. They organized and encouraged automobile exhibitions, along with motor races and other varied automobile activities. At the time motorists faced trouble and harassment by many in the community, and the ACA worked to bring about understanding and acceptance of what many saw as "just a fad." The group grew and in time published numerous road maps, books, and other articles for motorists, bicyclists and aviators. Learn More...