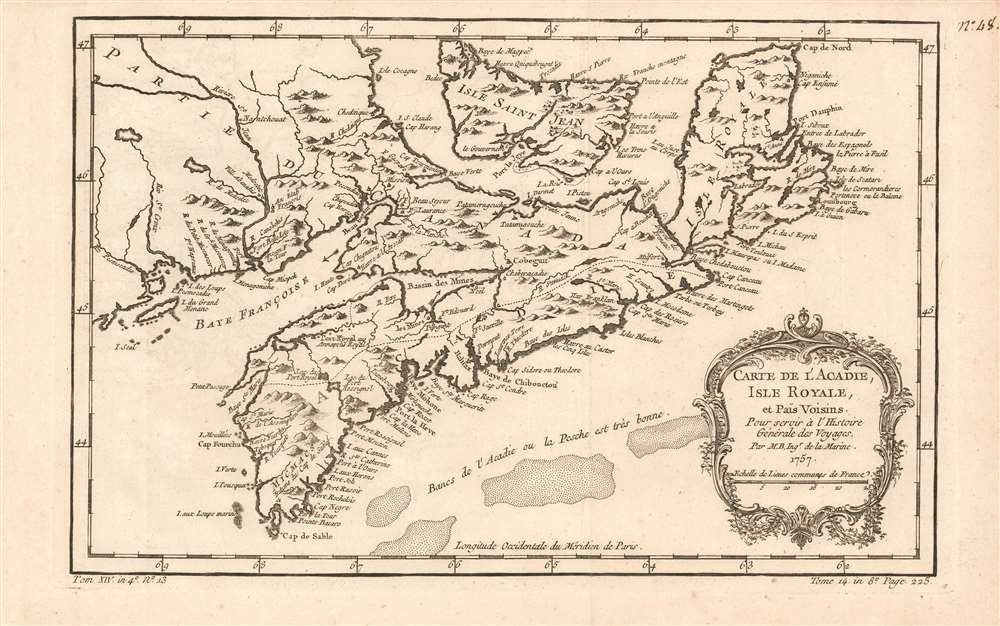 This is a lovely example of Nicolas Bellin's 1757 map of New Brunswick, Nova Scotia, and Newfoundland. It includes Prince Edward Island (I. Isle Sainte Jean) and Isle Royale (Cape Breton Island). While a number of rivers are illustrated inland detail is sparse and the focus overall is on the coastlines. A dotted line divides 'Acadia' from the northern parts of Nova Scotia from the rest of Canada. The map includes arrows indicating currents in several locations, and a notation on the shallows to the south, in French: 'The Banks of Acadie, where the fishing is very good.'

The map was executed in 1757 for inclusion in Prévost's Histoire générale des voyages, and was again printed in 1780 for Harpe's abridged edition of that work, perhaps better known for its imaginative flourish than for its factuality. Nevertheless, despite the venue, Bellin was an authoritative geographer who drew on state-of-the-art knowledge for the maps he contributed. This map appears on the market from time to time, although OCLC only lists nine copies of the separate map in both editions combined. Prévost's Histoire and Harpe's abridged version of it are well represented in institutional collections.