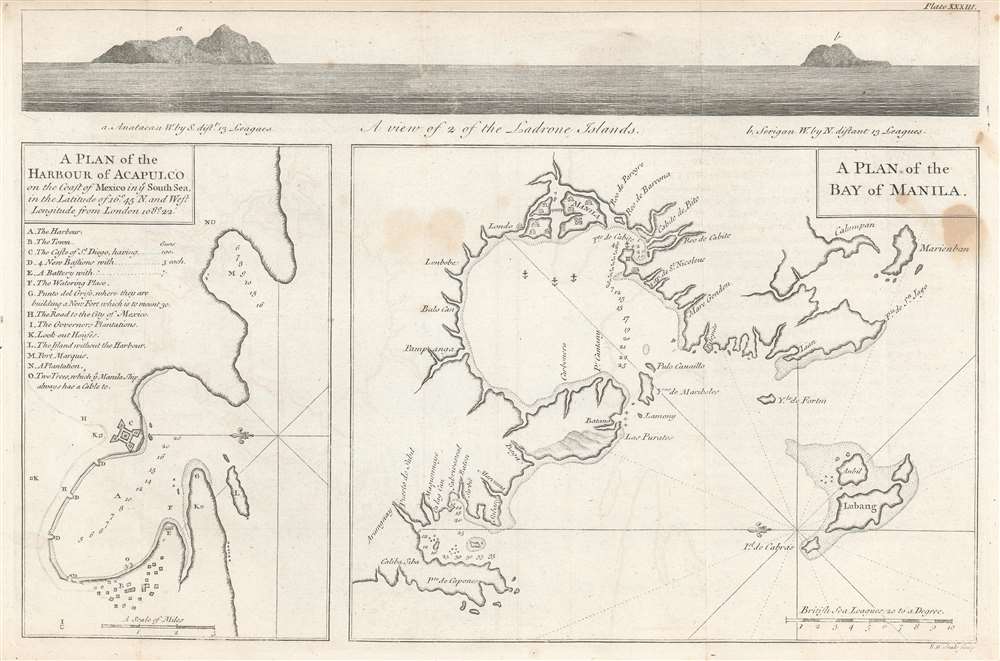 Anson's Charts of the Two Ends of the Pacific Ocean

This attractive 1748 engraving includes charts of the harbors of Acapulco, Mexico and Manila in the Philippines, the two chief ports for Spanish galleons crossing the Pacific Ocean. They are accompanied, at the top, with a coastal view of the Ladrone Islands: these were the usual midway point for the route between the two charted ports. The map accompanied the 1748 volume describing George Anson's privateering voyage around the world, wherein Anson led eight ships on a mission to disrupt, capture and despoil Spain's holdings in the Pacific. As Acapulco and Manila were essential ports at each end of a Spanish Pacific voyage, the inclusion of these charts in Anson's work was essential. Despite two ships having to return home, and one ship - the Wager - succumbing to mutiny, Anson's venture was a success; he returned to wealth and acclaim.

The view, specifically of two of the Northern Marianas, shows coastal profiles of the island of Anatahan I(viewed west by south) and the island of Sarigan (viewed west by north.) Coastal views such as these were not purely decorative, but were considered essential navigational tools used for visual confirmation that a ship actually was where its navigator's instruments indicated it to be.

The eastward-oriented chart is oriented to the east; A lettered key points out the locations of Acapulco's harbor, main town, its fortifications castle (Castle S. Diego and its 100 guns, and additional battery of 7, along with an a new fortification under construction). Depth soundings and important anchorages are noted as well.

Also oriented to the east, the chart of Manila shows the city, spread out on three islands joined by a bridge. Several harbors are shown, both with soundings and anchorages.

This map was engraved by Richard Seale for inclusion in Anson's 1748 A voyage round the world, in the years MDCCXL, I, II, III, IV. A French edition was produced in 1751. The separate map is only catalogued in the collections of Harvard, the Clements, and the National Libraries of Israel and Australia. Anson's Voyage is well represented in institutional collections.