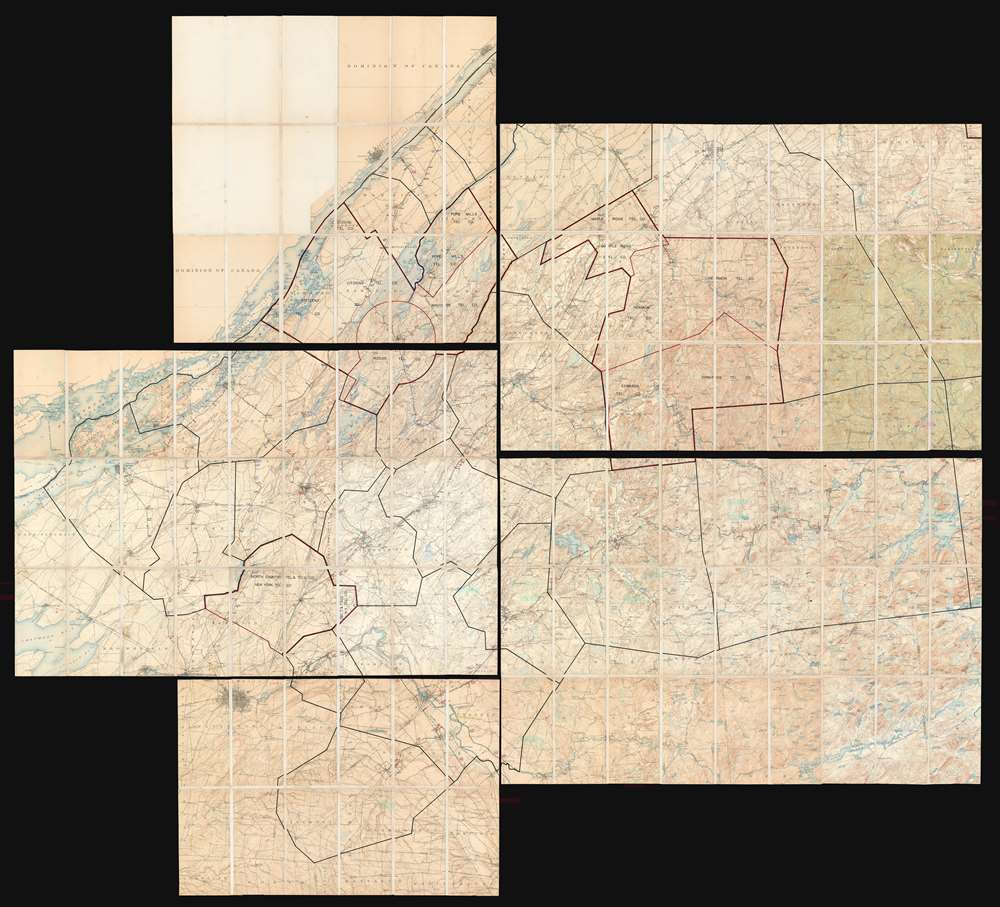 A one-of-a-kind piece highlighting small telephone companies in the Adirondacks.
$500.00

An interesting telecommunications infrastructure piece, this is a c. 1920 map of Adirondack region telephone companies featuring manuscript annotations throughout. Dissected and mounted on linen on five sheets of varying sizes, the map depicts the region from Howe Island and Wolfe Island in the Saint Lawrence River to Lake Lila and from Prescott, Ontario to Lorraine, New York. Although the exact purpose of the maps remains unclear, it seems obvious that they were used for line maintenance and management.

Manuscript telephone lines stretch across all five sheets, with each line labeled numerous times and marked by differently colored dashed lines to make them easier to trace. Line 63, for example, is marked by a dashed green line and stretches form Clayton, New York and runs along the Saint Lawrence River to Alexandria Bay. Line 57, also marked by a green dashed line, runs from Carthage on the Black River in the lowermost sheet through two other sheets before ending at Benson Mines near Star Lake. Numerous other lines wind their way through the region except, as is noted in pencil, just below the town of Lafargeville east to Theresa. These pencil notations appear to be suggesting that a line connecting Line 61, Line 9, and Line 53 should be constructed below Lafargeville east to Theresa.

A Closer Look at the Printed Map

Countless towns and villages are labeled throughout the region, including Watertown, Carthage, Gouverneur, Ogdensburg, and Canton. Rivers, lakes, and swamps are also labeled. Since U.S. Geodetic Survey topographic maps provide the base upon which all the notations concerning the telephone companies were done, topographic lines are illustrated throughout, allowing the viewer an understanding of the land itself.

As stated above, this map was compiled from several different maps published by the U.S. Geodetic Survey in the early 20th century, most likely in different years. We have been unable to pinpoint an exact date for the creation of the map, due to the lack of available information about the specific telephone companies referenced. We believe that it was compiled c. 1920 using U.S. Geodetic Survey maps that were most likely published in several different years.

Five sheets of varying size laid down on linen. Light wear along original fold lines. All are blank on verso. Size above represents composite.
Looking for a high-resolution scan of this?